We’re really sorry about this, but these are not ordinary times…

The human ethics train wreck named Donald Trump is now in the process of exposing how thin the veneer of professionalism is for many alleged intellectuals, scholars and lawyers. On an e-mail list of most of the legal ethicists in the country, one of them posted this in reaction to Justice Ginsberg’s unethical and unjudicial shots at Donald Trump:

“I love RBG way too much to be critical of her in any way . Long may she live!”

This opne expression of willful denial, from not merely a lawyer, but an ethics specialist! It is the epitome of one of my father’s favorite quotes, “My mind’s made up, don’t confuse me with facts.” I responded to the list that it was the most depressing statement I had ever read from any of the list’s participants.

Paul Butler’s op-ed in the New York Times isn’t much better. The Georgetown Law Center professor defended Ginsberg’s indefensible comments by arguing that these times are special, and thus suspend the ethics principles that must govern judges if the judiciary is to engender any respect or trust at all. He writes:

“Normally Supreme Court justices should refrain from commenting on partisan politics. But these are not normal times. The question is whether a Supreme Court justice – in this case, the second woman on the court, a civil rights icon and pioneering feminist — has an obligation to remain silent when the country is at risk of being ruled by a man who has repeatedly demonstrated that he is a sexist and racist demagogue. The answer must be no.”

No, Professor, the answer must be “yes.” END_OF_DOCUMENT_TOKEN_TO_BE_REPLACED 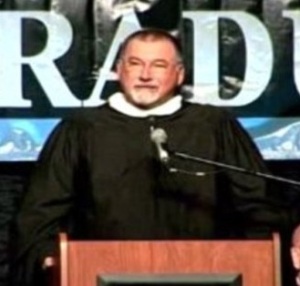 Principle Stenner giving David McCullough’s speech. You can’t see that his pants are on fire from this angle…

[NOTE: the original post’s headline ended with the creative word, “defeinitely,” I know not why. My demon proofer caught it yesterday, but I just read his alert. I’m sorry.]

Principal Mark Stenner delivered the commencement address for the May 22 graduation ceremonies for West Boca High School. It may have sounded faintly familiar to some of the those in the audience; after all,  Massachusetts’ English teacher David McCullough gave virtually the same speech to the class of 2012 at Wellesley High School.  That speech went viral on YouTube with more than 2.5 million views. Known as the “You Are Not Special” speech, it got McCullough, the son of Pulitzer Prize-winning historian David McCullough, a book deal. Principal Stenner repeated this famous, extensively circulated speech almost word for word,  never mentioning McCullough. He did make slight word changes and altered locations examples when necessary, but it was the same speech, and the plagiarism was noticed almost immediately.

Stenner still insisted that he didn’t  plagiarize the address . “I liked his idea. I should have said this was in part taken from him, ” he said. “In part,” in this case, means cutting some of the original, but including  details like referencing  ‘batty Aunt Sylvia” and the “maternal caped crusader,” and citing the same philosophers as McCullough, like Sophocles and Thoreau, but not crediting the man who wrote almost every word of the speech.
END_OF_DOCUMENT_TOKEN_TO_BE_REPLACED

Over the past two decades, historians have gone from obscure scholars to media stars, as the 24 hour news cycle prompted TV news shows to bring the best-selling non-fiction authors out of the archives into the studios. There the masters of the past were suddenly opining on the present, as the likes of Douglas Brinkley and Doris Kearns became as ubiquitous as Pat Buchanan or George Will. The supposed wisdom and solemn reliability of historians has put them in other unlikely roles too, such as Truman biographer David McCullough lending his soothing baritone to the narration of Kan Burns’ epic Civil War documentary.

One of the catalysts for this development was the late historian Stephen Ambrose, who hit on a formula to make history both provocative and lucrative.. Ambrose turned himself into the troubadour of World War II, inspiring dramatic renditions of his books, such as “Band of Brothers,” and launching a “Greatest Generation” industry. Shortly before Ambrose died in 2002, a brief scandal erupted when it was revealed that one of his histories was significantly plagiarized (Kearns had one of her books similarly discredited), but he handled the potential disaster deftly, admitting that he inadvertently published some verbatim notes, and died soon enough thereafter that the scandal did little to suppress sales of the “Band of Brothers” DVDs. The truth was, however, that more than one of his books stole from other sources.

Now new evidence is making it clear that Ambrose, the historian pop star, was indeed a full-fledged fraud, raising the question, “Who are these guys?” And why should we trust them? END_OF_DOCUMENT_TOKEN_TO_BE_REPLACED