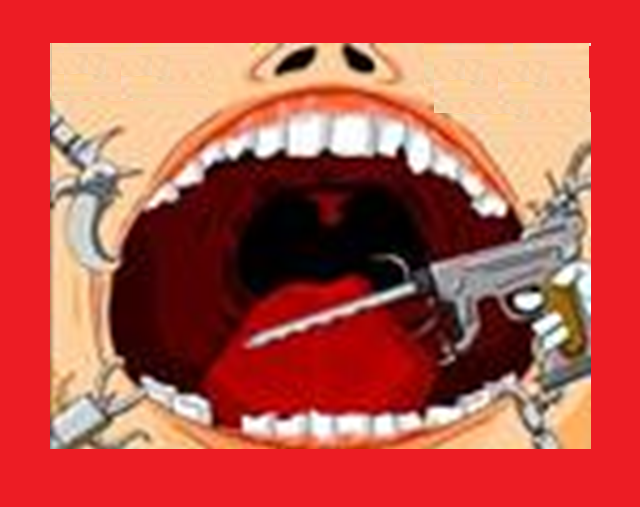 I arrived at the appointed time for my triple tooth extraction to be told that I would be required to pay the entire cost of my surgery on the spot, and the amount was a cool $4000. This, despite the fact that I had been told (by the doctor) that I could wait before deciding on the various treatment options, and having not received clear (to me, at least) information that the office took no general medical coverage at all, just dental insurance, and my dental insurance was not among the blessed. (Raising the related issue of why my dentist would refer me to an oral surgeon who did not accept the insurance that the dentist did, without alerting me in advance. “We tried to call you,” the snotty desk staff said. Really? I had no messages on my home or office lines. “We only call our patients on their cell phones,” I was told. Then why do you ask for the other numbers? If you have essential information to convey, and you can’t reach a patient by cell, why wouldn’t you try the other contact options? Where on the form does it say that the only number you will use is the cell phone? I only included the cell number because it was asked for: I use cell phones when traveling, period, and during the lockdown it is usually uncharged. If I am going to be expected to hand over 4 grand on the spot, I need to be told, and the information I provided gave an easy means to tell me. What I suspect is that the 20-somethings behind the desk, living on their smart phones themselves, would never dream that anyone wouldn’t do the same. It wasn’t a policy, it was an unwarranted and incompetent assumption.

I informed the staff that its conduct was unethical and unprofessional, and that its attitude was arrogant and obnoxious. Then I walked out. I don’t care if the next oral surgeon costs as much or more: I don’t trust people who treat me like this. Screw ’em.

1. It’s a banner day in the history of “the ends justifies the means” medical ethics! On this date in 1953, American medical researcher Dr. Jonas Salk announced on national radio that he had successfully tested a vaccine against poliomyelitis, the virus that causes polio. Salk had conducted the first human trials of his vaccine on former polio patients, on himself, and his family. The general consensus among ethicists is that self-experimentation is ethical: as one scholarly paper put it, “Organizational uncertainty over the ethical and regulatory status of self-experimentation, and resulting fear of consequences is unjustified and may be blocking a route to human experiments that practicing scientists widely consider appropriate, and which historical precedent has shown is valuable.” But using one’s family as guinea pigs? Unethical, absolutely. The researcher, in this case Salk, has undue influence over such subjects, and consent cannot be said to be voluntary.

END_OF_DOCUMENT_TOKEN_TO_BE_REPLACED

In 2013, Dr. Ben Burris, a successful Arkansas orthodontist, began offering low-cost teeth cleanings at his 11 offices around the state. This, he says, was a public service on his part, as he knows that preventive care is critical for teeth and that citizens who can’t afford dental insurance, which is expensive, often neglect cleanings. His cleanings cost $99 for adults and $69 for kids, far less than what other dentists charged in the state.

Burris quickly heard from  the Arkansas State Board of Dental Examiners and was told that he was breaking the law.  The Board threatened him with loss of  his license if he didn’t cease his bargain  cleanings. Why?

Well, Arkansas, like some other states, prohibits licensed dental specialists like orthodontists from doing work outside of their specialty even though they are certified to practice general dentistry.  With over a hundred employees out of work, Ben suspended the program.

What’s going on here? Boy, I did a seminar on dental ethics a few years ago: I wish I had another one where I could discuss this. The regulation is nothing more than the profession lobbying the legislature and limiting services to drive up prices. What other possible explanation is there? Cleaning teeth is not the rocket science of dentistry, and any qualified dentist should be completely competent to supervise the task, especially since much of teeth cleaning is handled by hygienists. A licensed dental hygienist is legally qualified to work in a general dentist’s office or that of a specialist without restrictions.  But the orthodontist was venturing outside of the little specialist’s box the state had built for him. END_OF_DOCUMENT_TOKEN_TO_BE_REPLACED 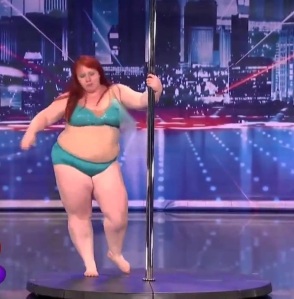 “Uh…Desiree? We need to talk…”

Atlantic City’s Borgata Hotel Casino & Spa calls its waitresses the “Borgata Babes,” and makes its hiring decisions accordingly. The cocktail waitresses’ job description requires part fashion model, part beverage server, part hostess, and entirely eye candy for the male of the species.  When the casino  hires a new BB, it weighs her. If her poundage increases by more than 7 percent, the casino reserves the right to suspend her until she’s back in flirting trim.

Anyone could see this lawsuit coming a mile away, and sure enough, twenty-two newly-portly babes lost a lawsuit against the casino in which they claimed sexual discrimination. (There are no male equivalents to the Borgata Babes, just the usual ugly, flabby male waiters and bartenders.) New Jersey judge Nelson Johnson ruled last week that the Babes are paid sex objects, and that the Borgata’s requirements were legal because the women were aware of them and accepted them as a condition of their employment. Johnson wrote, “Plaintiffs cannot shed the label ‘babe’; they embraced it when they went to work for the Borgata.”

Slate, in writing about the case, sees the ruling as an endorsement of weight discrimination that could spread like the flu, putting corpulent women and men on the breadlines. ” Says Slate:

[T]he ruling also raises questions about the role of babes in workplaces across the country. It’s conventional wisdom that male gamblers will keep pulling away at the slots as long as they’re lubricated by strong drinks served up by babely women. But wouldn’t some female patrons prefer to be served be hunky pieces of man candy? And couldn’t most workplaces argue that its jobs are better performed by babes, regardless of the venue? Is it OK to require that strippers be babes? Casino waitresses? How about investment bankers?”

Now there’s a slippery slope argument if I ever saw one. While it is true that physical attractiveness can be an employment asset in virtually any job—note #2 on fired TV reporter Shea Allen’s “confessions”— there are some jobs for which it is the primary, or at least a substantial and thus legitimate requirement. Strippers, of course. Fashion models. Cheerleaders. Actresses. Personal trainers. Fox newsreaders. Hooters girls, and pretty obviously, Borgata Babes. To say that a business can’t make a decision to have fantasy sex objects as part of its appeal is an excessive use of political correctness grafted to state power. Essentially, the suing Babes are arguing that they can pull a bait and switch—use their well-toned beauty to get hired, agree to maintain the high standard of visual perfection that they presented to their employer, then go to pot and sue if their employer objects. Beauty is an asset in the workplace and a tangible one: the pressure on the culture to behave as if that asset doesn’t exist (the pejorative labeling of a preference for the lovely over the hideous as “lookism” is the weapon of choice) and to prohibit employers from ever hiring on that basis in jobs where it is a substantial and relevant qualification is as unfair to the fit and comely as requiring an investment banker to look like Kate Upton.

Since the law will require, and should require, clear standards, there will need to be a legislative determination of what kind of jobs for men or women can justify termination when their occupants become unsightly. The law should also, however, permit a job applicant’s appearance to provide a legitimate and legal edge when all other qualifications are equal even when the job itself does not have any beauty or fitness requirements. I do not deny that this is an ethical and emotional minefield, implicating age and race bias, and that there are some contentious battles to be fought. I do deny that the Borgata Hotel Casino & Spa is the place to fight one.

One place where the appearance discrimination battle does need to be fought is Iowa, where the case I wrote about earlier, in which a hen-pecked dentist sought to fire his attractive and competent assistant because he found her “irresistible” and his wife was jealous, had the same ridiculous resolution last week. Yet another Iowa court ruled that her impeccable appearance was a legal justification to can her. That’s as outrageous as firing a dental assistant because she’s put on a few pounds, but being a “babe”—or not—should be irrelevant to one’s skill in flossing teeth.

It does give some hope to the ex-casino waitresses. I hear they are hiring unsexy dental assistants in Iowa.

An Iowa court has decreed that a boss may fire a worker for no other reason than the fact that she is so sexy that she makes his wife jealous, and with good reason, since he finds her irresistibly attractive.

If the Iowa Supreme Court’s ruling that dentist James Knight was within his legal rights to fire otherwise efficient and effective dental assistant Melissa Nelson because he couldn’t resist her innate womanly charms stands, and it will take the Supreme Court of the United States to reverse it, gender discrimination has just been given a green light by one of the highest courts in the land. END_OF_DOCUMENT_TOKEN_TO_BE_REPLACED

Ethics Alarms is swearing off “angry ex-boyfriend/girlfriend takes cruel outrageous revenge” stories, no matter how juicy the ethics lesson may be. First it was the tattoo artist who defaced his ex’s back with a huge and ugly drawing of steaming dog excrement that was fantasy masquerading as news, and now it’s the Polish dentist scorned…remember? The one who pulled out her cheating boyfriend’s teeth? Yes, it seems that horror story was a hoax too.

A lot of people who should know better think that web hoaxes are funny and hoaxers are clever. I regard them as the ethical equivalent of  chefs and waiters who spit in restaurant customers’ food. The web creates—a web!—of information and communication across nations and cultures, and poisoning that web with bogus stories creates a chain of unpredictable harm. At very least, hoaxes make every trusting source that passes along the lie an unwitting accomplice in a despicable act. It harms long-nurtured relationships of mutual trust between those who post on blogs and websites and those who read them. END_OF_DOCUMENT_TOKEN_TO_BE_REPLACED

The hallmark of professionals is trust. We should be able to trust professionals to do their duty on our behalf despite their personal feelings. Lawyers often dislike or even fear their clients, for example: a defendant charged with murder who has stabbed his previous three attorneys with pencils is now back in court with a fourth, though certain precautions have been taken. When a professional finds that his or her personal feelings are so intense that they jeopardize the professional’s ability to fulfill their duties objectively, fairly and well, then that’s a conflict of interest, and it must be dealt with, usually by stepping aside.

A professional who doesn’t step aside despite an evident conflict has determined that he or she has the detachment and self-control to overcome it. A recent news story from Poland, however, suggests that it is not a good idea to risk too much trust on a professional’s determination that she can remain objective. END_OF_DOCUMENT_TOKEN_TO_BE_REPLACED