So THAT’S why they wear masks!

Sandeep Jauhar is a cardiologist, the author of “Doctored: The Disillusionment of an American Physician” and “Intern: A Doctor’s Initiation.”and a contributing op-ed writer for the New York Times. He recently penned a column for the paper that raised concerns about threats to doctor-patient confidentiality, specifically from the case, in Washington state, of Volk v. DeMeerleer.

Howard Ashby, a psychiatrist, was sued after his patient, Jan DeMeerleer, shot and killed an ex-girlfriend and her 9-year-old son before shooting himself.  The estate of the victims, Rebecca and Phillip Schiering sued Dr. Ashby, alleging that he breached a duty to warn DeMeerleer’s victims even though the killer had made no specific threats toward the Schierings during his treatment.  Last year, however,  that judgment was reversed by an appeals court, which held that doctors could be required to warn “all foreseeable victims” of their potentially dangerous patients in their care.

It’s a terrible decision, and Jauhar does a good job explaining why. Unfortunately, he also writes this..

“I once took care of a business executive in the emergency room who had hired call girls during a weekend drug binge. When he saw a police officer outside his room, he quietly handed me an envelope containing a large amount of white powder. I wasn’t sure what to do with it, so I discarded it. For the next several hours the patient eyed me suspiciously, probably wondering whether I had ratted him out. But it never occurred to me to do so.”

Well, it should have. Confidentiality is one thing, assisting in a crime is another. The Hippocratic Oath says“What I may see or hear in the course of treatment, I will keep to myself.” That only means, however, that doctors who learn about criminal activity a patient may be involved in is bound not to report it (lawyers have the same obligation).  Jauhar did more than not report criminal activity; he participated in it. He crossed the line by disposing of contraband. END_OF_DOCUMENT_TOKEN_TO_BE_REPLACED

This morning on New Day, CNN’s Alisyn Camerota this morning hectored and badgered a GOP Congressman—as soon as I find the video, I’ll add his name–on the issue of gun regulations in the aftermath of the most recent mass shooting. Her fevered attitude and rhetoric, combined with the Congressman’s measured responses, should serve as a template for the commentary on future shootings.

It was an infuriating conversation, and like all recent conversations and speeches about guns, including the President’s irresponsible statement following yesterday’s shooting, it springs from an unwillingness to face facts, accept the nature of rights, and to be straightforward about what gun control proposals really mean.

The following are facts. Alisyn Camerota, like the President, and like her partner Chris Cuomo, who opined that anyone opposing gun control was “delusional,” either can’t accept them, or is unwilling to be honest and candid about their implications.

1)  Rights, if they exist and are upheld by the government, will always be abused by some people.

2) The only way to stop people from abusing rights is to end the rights. END_OF_DOCUMENT_TOKEN_TO_BE_REPLACED 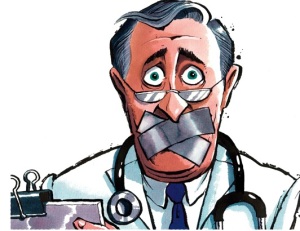 “See doc? That’s what you get for shooting your mouth off! Get it?”

A federal appeals court this week upheld an NRA-crafted Florida law making it illegal for doctors to ask questions and record information about a patient’s gun ownership. Medical groups had challenged the law, arguing that it infringed on doctors’ First Amendment rights.

Which it does. The law is an outrageous incursion on free speech in order to protect gun owners from unwelcome anti-gun lobbying by their physicians.

Among other restrictions, the law says doctors must refrain from asking about gun ownership by patients or family members unless the they believe in “good faith” that the information is relevant to medical care or safety. It also prevent doctors from discriminating against patients or “harassing” them because of owning firearms, which presumably means that it is illegal for a doctor to tell a patient, “You’re too clumsy to own a gun, and if you blow your damn face off, don’t come crying to me.”

“The purpose of the act, as we read it, is not to protect patient privacy by shielding patients from any and all discussion about firearms with their physicians; the act merely requires physicians to refrain from broaching a concededly sensitive topic when they lack any good-faith belief that such information is relevant to the medical care or safety of their patients or others,” said the 2-1 majority opinion, written by Judge Gerald Tjoflat and joined by Judge L. Scott Coogler.

“Simply put, the act is a gag order that prevents doctors from even asking the first question in a conversation about firearms. The act prohibits or significantly chills doctors from expressing their views and providing information to patients about one topic and one topic only, firearms.”

Doctors shouldn’t use their position of influence to try to impose their political, social and life-style views on patients. If the American Medical Association wants to declare that to be an unethical abuse of a doctor’s status and a patient’s trust, I wouldn’t complain. The law, however, has no more business telling doctors that they can’t advise their patients that owning guns may be bad for their health or their neighbor’s health than it has making it illegal for doctors to tell patients that Donald Trump is just what this country needs in the White House. What’s next, telling dentists that they can’t tell you about their brilliant kids while they’re poking around your mouth?

The state doesn’t have to get involved in what patients and doctors talk about, shouldn’t, and mustn’t. This is a job for ethics, not law. If a doctor won’t stop telling you that the Second Amendment should be repealed, the remedy is easy: tell him to shut up, or you’ll find a new doctor.

Or just shoot him.