2014 Conflicts of Interest of the Year

Unethical Attire of the Year

Unethical Political Candidate of the Year

Ethically Clueless Voters of the Year

New York’s 11th Congressional District, which contains Staten Island and parts of Brooklyn. These alert and ethical citizens sent back to Washington thuggish and crooked Rep. Michael Grimm (R), then facing a 20-count indictment by federal authorities for fraud, federal tax evasion, and perjury, having earlier distinguished himself by threatening to kill a reporter and being recorded doing so.

Unethical Advertising of the Year

The Discovery Channel’s campaign for “Eaten Alive!” which did not, in fact, feature anyone being “eaten alive,” or at all.

Halos. Or perhaps this is the Child Abuse Division:

Wendy Davis, Democratic candidate for Texas Governor, offered an ad attacking her wheelchair- bound opponent that 1) appealed to bias against the disabled 2) misrepresented the duties of a state attorney general 3) misrepresented the facts of the cases the ad referred to and  4)  deceived the public regarding the ethical duties of lawyers, which Davis, a lawyer, presumably understands. END_OF_DOCUMENT_TOKEN_TO_BE_REPLACED

I wrote about this ethical breach when Ellen DeGeneris did it at the Oscars. The short version is this:

“It’s unethical to pretend that a selfie is a spontaneous  gesture of fun and friendship when you have a commercial agreement in place to use the photograph in a way that promotes the cell phone manufacturer.” 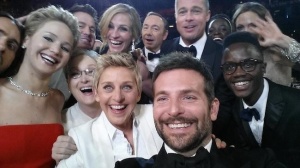 Taken completely spontaneously using a Galaxy S5 by Samsung. Get yours today!

Ellen DeGeneris is adorable, and as ideal a public face to place on the image of gay acceptance and same-sex marriage as you could concoct in a marketing strategy meeting. She’s funny, she’s friendly, she’s nice: to be threatened in any way by Ellen is to be the epitome of an irrational homophobe.. Her accumulated good  largely insulated her from the negative criticism she earned with a shockingly inept performance as this year’s host of the Academy Awards ceremony. She didn’t exactly make one long for Seth (“We saw your boobs!”) McFarland, last year’s oppressive MC,but watching her—any experienced performer could see the signs of a comic who knew she was bombing and had no idea what to do about it—was uncomfortable when it wasn’t deadly boring.

The one routine that seemed successful was DeGeneris’s successful effort to create the “most re-tweeted tweet of all time,” which she accomplished by dragooning Bradley Cooper, Julia Roberts, Meryl Streep, Angelina Jolie, Brad Pitt, Jennifer Lawrence  Lupita Nyong’o, Kevin Spacey and Jared Leto in to take a selfie with her. It garnered over 3 million retweets at last count. But it was a set-up. This was not just a fun party stunt with friends, which is how it was represented to the audience and indeed to the stars themselves. No, the selfie was part of a very pricey deal between the Academy and Samsung, which sells the recently enhanced Galaxy S5 Ellen used to take the picture.

From the Wall Street Journal: END_OF_DOCUMENT_TOKEN_TO_BE_REPLACED