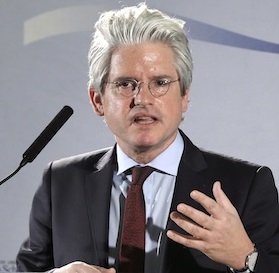 Yes, David Brock really does wear his hair like that, and yes, I admit to being biased against anyone who does.

There is a real need for a fair, non-partisan, non-ideological ethics watchdog organization in Washington, D.C. Unfortunately, what we are stuck with is the Center For Responsibility and Ethics in Washington, headed by Melanie Sloan, and it is none of these things. The only clue on the group’s website, however, is the fact that Republicans are somehow found to be engaging in unethical conduct at a rate of about three times that of Democrats, and the Democrats CREW does criticize are so blatantly unethical that an old, blind and deaf watch dog would be disgusted by the stench. The mainstream news media, and which on the whole is about as unbiased as CREW is, still cites the Center as a “non partisan” source, all the better to attack Republicans with a semblance, though a deceptive one, of objectivity. CREW has operated, and quite dishonestly, as a nonprofit registered under a section of the Tax Code — 501(c)3, which prohibited partisan activity.

To be clear: CREW has done some excellent work flagging unethical conduct by Republicans officials. It is the lying about being objective that makes it an unethical organization. I wrote about CREW’s facade here, and here, and also noted when it briefly dropped is pose when Sloan briefly joined that famously objective operative and lobbyist Lanny Davis’s firm—this is the same Lanny Davis who became a familiar fixture on TV spinning his friend and client Bill Clinton’s conduct during the Monica scandal—shortly after CREW blatantly pushed the interests of Davis’s clients on its website.

Now, at last, any plausible deniability of being an undercover ally of the Democratic Party is gone with the announcement that David Brock, the strange ideological flip-flopper who went from conservative assassin to progressive propaganda master approximately the second that he announced that he was gay, has become CREW’s Chairman of the board, and is preparing to craft the organization into as much of an unequivocal attack organ for the Left as Brock’s Media Matters, the media watchdog that somehow only notices bias on the right. This is too obvious even for the IRS to ignore, so CREW will have to turn in that 501(c)3 status that it never had a right to use anyway for the more political 501(c)4.

If you have any lingering question about Brock’s credibility, how addled he is by bias and how reliable CREW will be (and Media Matters is), consider his response when Politico asked if CREW would still criticize unethical Democrats:

“Our experience has been that the vast amount of violations of the public trust can be found on the conservative side of the aisle.”

How can any fair and intelligent individual respect or trust an organization led by someone who would utter such an absurd statement?