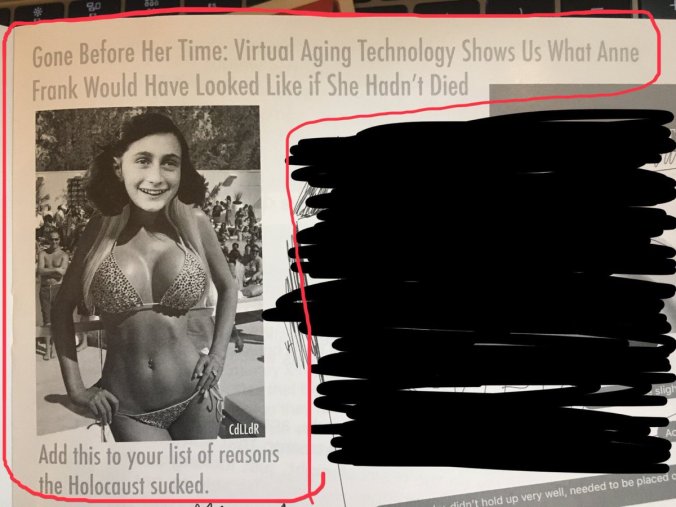 Fortunately, I had already disavowed my Harvard degree before this surfaced, so I am only mortified rather than trying to figure out how to flush myself down the toilet.

Above is an allegedly  humorous gag from Harvard’s student-run humor magazine, which once gave us Robert Benchley, Al Franken, and “Animal House.”  [Full disclosure: I was rejected by the Lampoon when I competed to join the staff as a student. ] The magazine has often championed sophomoric humor as well as bad taste, but there are limits to everything. I’d say using the image and memory of a brave and iconic Jewish girl who died in a Nazi concentration camp for a cheap, spectacularly unfunny photoshop gag is over the line, wouldn’t you? Wouldn’t just about anyone with an atom of common sense and decency?

Fortunately, some Harvard students erupted in anger over the photo of Frank’s head grafted on the body of a pumped-up busty bikini girl and the “ Add this to the list of  reasons the Holocaust  sucked” punch line. So did the New England branch of the Anti-Defamation League,  which condemned  the cartoon as a “vulgar, offensive & sexualized” meme that “denigrates [Anne Frank’s] memory & millions of Holocaust victims….Trivializing genocide plays into the hands of #antisemites & Holocaust deniers.” END_OF_DOCUMENT_TOKEN_TO_BE_REPLACED