During last night’s game against the Phillies,  New York Yankees left fielder Brett Gardner crashed into the wall  making a terrific catch. He fell to the ground, clearly stunned, then got to his feet, shaking his head like a cartoon character after being conked on the noggin.

Baseball’s concussion protocol requires that a game be stopped and a player evaluated on the field by a trainer if there is an episode that carries a substantial risk of concussion. If the trainer detects any signs of a concussion, the player must be removed and examined further. None of this happened after Gardner’s collision with the wall. He finished the game, going hitless.

Asked about his head later, Gardner said that he felt good. But the protocol isn’t up to the player, nor should it be. Players often refuse to acknowledge injuries, and Gardner is the perfect example of the kind of player who won’t. He is famously tough, and he is also a veteran on a Yankee team with several hungry young outfielders who would love to take his job. It was a Yankee first baseman, after all, who took a rest for one game and lost his job to Lou Gehrig,  permanently. Nobody wants to be the next Wally Pipp. END_OF_DOCUMENT_TOKEN_TO_BE_REPLACED 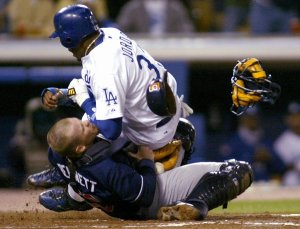 At least one major league sport cares about its players’ health more than it does about highlight films.

Today Major League Baseball announced that it will be banning collisions at home plate, one of the most exciting plays in baseball, and one of the most dangerous. The violent and unpredictable convergence of large human bodies created when runner and ball arrive at home plate nearly simultaneously as a catcher positions his body to receive a throw while blocking access to the plate have decided games and championships, but wrecked careers and, quite possibly, brains. Football’s frightening record of player dementia prompted baseball to check its records, and there was tell-tale evidence that concussions take their toll on ex-catchers as well.

Last season, for the first time, baseball required players suffering concussions to stay on a special disabled list until they were cleared to play after a head examination. The new ban represents more progress.

The rules change will probably take this form, according to ESPN: END_OF_DOCUMENT_TOKEN_TO_BE_REPLACED