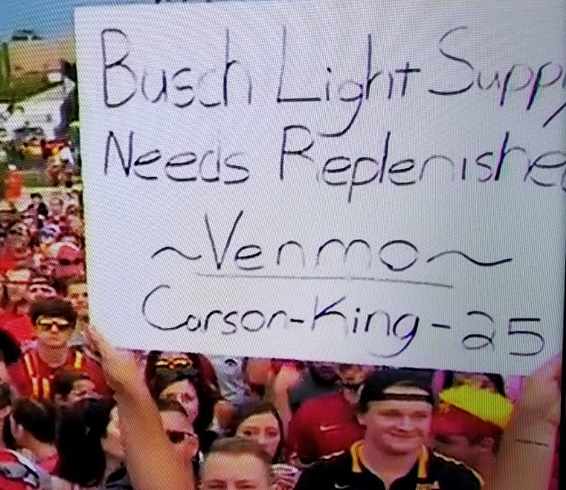 …but, as Hyman Roth said, “This is the life we have chosen.”

Act I, Scene One: Iowa’s Carson King, 24,  was seen on “ESPN College GameDay”  holding up a moronic sign in a football game crowd that read, “Busch Light supply need replenished. Venmo Carson-King-25.”  That isn’t comprehensible English even by stadium sign standards. Needs to be replenished? Needs replenishment? Giving people positive reinforcement for being illiterate is irresponsible, and makes the public stupid.

Act I, Scene Two: People actually sent money to King’s beer fund on Venmo. With all the really desperate people in this country and all the legitimate objects of charity, this boob’s scrawled plea for beer money struck a chord. People sent in contributions who would normally sneer at homeless people begging on the street.

Act I, Scene Three:  Venmo and Anheuser-Busch, seeing a promotional opportunity, both  pledged to match  donations to Kings “Help me be a drunk!” fund. The sign raised $1.14 million.

Now comes the one moment of reason and ethics in the tale: King decided to donate the money to  the   University of Iowa Stead Family Children’s Hospital.  Act I ended on a positive note.