Op-eds that make American dumber shouldn’t be published. There is an op-ed in today’s New York Times by Jamelle Bouie, adding another fact-free rant to the current freak-out over the so-called Texas freak-out law. Bouie chooses to repeat a theme of his from other columns, that the case proves that the Supreme Court “has too much power.” Bouie was first spotted by Ethics Alarms as Slate’s resident race-baiter, a job at which he was embarrassingly bad. Naturally, this qualified him to be added to the New York Times stable of socialists, fantasists and Trump-Deranged fanatics, since one incompetent and biased black columnist (Charles M. Blow) wasn’t enough in these times of “diversity and inclusion.”

Bouie, on the topic of the Supreme Court, literally (which I mean literally) doesn’t know what he is talking about. He is not a lawyer, and if he ever read a whole Supreme Court decision (or had someone knowledgeable explain one to him), I’ve seen no evidence. of it. Guess which of the (incompetent) dissents to the SCOTUS majority decision not to suspend the Texas law when there is no procedural precedent for doing so. Come on, guess! Why Sonia Sotomayor, speaking of “diversity and inclusion,” of course. She was a cynical choice for the Court by Barack Obama, using approximately the same identity-based standards that made Kamala Harris Vice-President.

Non-lawyers love to quote Sotomayor, because she seldom makes legal arguments, just emotional ones. “The court has rewarded the state’s effort to delay federal review of a plainly unconstitutional statute, enacted in disregard of the court’s precedents, through procedural entanglements of the state’s own creation,” she wrote this time, in a snippet being repeated by other pro-abortion hysterics. That’s because the Court doesn’t strike down unconstitutional laws until the government tries to enforce them. What Bouie cites as an example of the Court having too much power is in fact proof that its power is limited.

END_OF_DOCUMENT_TOKEN_TO_BE_REPLACED

Ethics Alarms has occasionally referenced the Arthur Herzog novel “IQ 83,” in which mutant DNA infests the U.S. population and lowers its average intelligence disastrously. “Is We Getting Dummer?” a typo-riddled New York Times front page asks. In the novel, the news media is one of the victims of the virus; today, it appears to be spreading the equivalent, and perhaps doing so intentionally.

Less than two weeks ago, we discussed a jaw-dropping (technically “head-exploding”) op-ed in the New York Times that criticized President Biden for giving poor Vice-President Harris assignments that were too darn hard for her, thus undermining her chances at being President, which was much to be desired. “[Biden] had to know that in choosing her as his vice president, he was making her his heir apparent. But based on how things look now, her work as his No. 2 could end up being baggage more than a boon. Mr. Biden and his team aren’t giving her chances to get some wins and more experience on her ledger. Rather, it’s the hardest of the hard stuff,” the Fordham political science professor wrote.

I thought this was about as incompetent an argument as I had ever seen published in a supposedly trustworthy publication, and even sinister in that too many readers lack the intellectual wherewithal to recognize its non-logic for the dog’s breakfast that it is. Prof Greer obviously thinks that Kamala Harris is qualified to be President, though why she does remains vague. But imagine an op-ed that takes the position that Harris is being unfairly “sabotaged” in her Presidential aspirations while simultaneously making it clear that she is obviously unqualified (which, of course, she is.)

END_OF_DOCUMENT_TOKEN_TO_BE_REPLACED

It’s not exactly “Is We Getting Dummer?” the New York Times headline in the prescient science fiction novel, “IQ 83,” by Science fiction author Arthur Herzog in which a man-made virus begins reducing the intelligence of Americans to idiot levels, but its close enough to cause concern. The NBC News headline is “Cities weigh free public transit amid rising costs.” Wait. what? Public transit is getting too hard to pay for, so the solution being considered is to make it free?

I assumed that this was just another example of incompetent headline writing, but no: if anything, the headline makes more sense than the rest of the article, in which we learn that:

The article doesn’t say Wu is a Democrat, and I didn’t bother to check. Trust me: she’s a Democrat.

In “IQ 83,” Patient Zero is the brilliant scientist who goofed while trying to invent a cure for mental retardation. In the real ife case of Wu and others, Patient Zero is obviously Bernie Sanders.

“A woman attempting to vote in West Boca Raton this morning was initially prohibited from entering the polling place because she was wearing a t-shirt with the letters MIT. BocaNewsNow.com has heard from multiple sources that an election supervisor at the polling place ultimately realized that MIT stands for “Massachusetts Institute of Technology” — a school where students tend to know how to spell — and was not a campaign shirt for the Republican candidate, who spells his name MITT. Campaigning is not permitted within several yards of a polling place. The woman was ultimately allowed to vote.”

This, mind you, was an election supervisor.

This certainly helps me understand why it is just thinly-veiled voter suppression to insist that voters be able to identify themselves at the polls, because nobody would ever try to try to vote under a false identify when our democratic process is being guarded by our best and brightest.

Once again, let me state that any electoral result is preferable to having another election hinge on the integrity of the system in Florida. 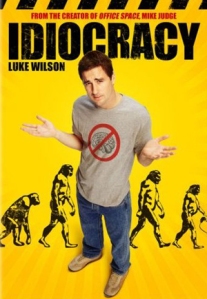 Why yes, it DOES remind me of “Idiocracy,” which is only funny if it isn’t true.

Today, just prior to convicting Drew Peterson of killing his wife, his jury sent a message to the judge asking what the word “unanimous” meant.

Think about the implications of this. First of all, it means that one man’s life and the U.S. justice system’s integrity is resting on the judgment of twelve people, not one of whom possesses a fifth grade vocabulary, or, if one of them does, he or she did not possess the skills of persuasion or credibility to convince a majority of his colleagues that yes, “unanimous” means that everybody is in agreement. It means that the voir dire system managed to carefully select the most ignorant and inarticulate jury of adults imaginable for a first degree murder trial.

That’s not all. It means that in Joliet, Illinois, a select group of twelve adults, in addition to possessing only a rudimentary English vocabulary, were completely uninformed about the jury system. To reach adulthood this stunningly ignorant about one of the basic features of our justice system and  democracy, these individuals could not have regularly read newspapers or watched the news, and if they did, could not possibly have understood what they were reading or seeing. END_OF_DOCUMENT_TOKEN_TO_BE_REPLACED