1. Book reviews I didn’t finish reading…In fact, I never got past the first sentence of the review of “Hitler’s First 100 Days” by Peter Fritzke. The title of the review is “How Hitler Transformed a Democracy Into a Tyranny,” so I suspected this would be in the metaphorical wind” the review begins, “How does the rise of Hitler look since the rise of Donald Trump?”

The Times book reviewer is an Oxford professor of history.  This is a particularly asinine opening for a book review now, when the President is being regularly criticized for not being autocratic enough. One would think that of all the Big Lies the news media has been broadcasting since November 2016, “Trump is Hitler” would have  revealed itself as the most contrived. The “resistance,” however, is at war with reality as well as democracy.

I’ve got the online version of the review right here—let me skim it quickly to see if the actual book contains any discussion of the Trump administration at all. Let’s see…apparently not, which isn’t surprising since this is a book entirely about Germany. Nonetheless, the reviewer—what happened to the British?—makes this observation toward the end:

“This use of theatrical choruses was innovative 90 years ago, but making such agitprop sound snappy to a contemporary ear is tricky. As Fritzsche describes a rally where the speaker railed against the Weimar system and its politicians, he translates the audience’s chorus as “Hang them up! Bust their ass!” The pre-echo of “Lock her up!” is audible.”

Audible to you, perhaps, you jackass. First, the use of crowd chants in political rallies and during speeches was ancient and a standard device when the Nazis employed it. Second, there is no similarity at all between the ominous Nazi chant and “Lock her up!” The Nazis were advocating executing and beating up those who opposed them, and they did just that.  “Lock her up!,” while still ugly, was a direct reference to that fact that Hillary Clinton had deliberately broken national security policies for her own benefit, and was counting on, as usual, skating clear of punishment—which, in fact, is exactly what happened. END_OF_DOCUMENT_TOKEN_TO_BE_REPLACED 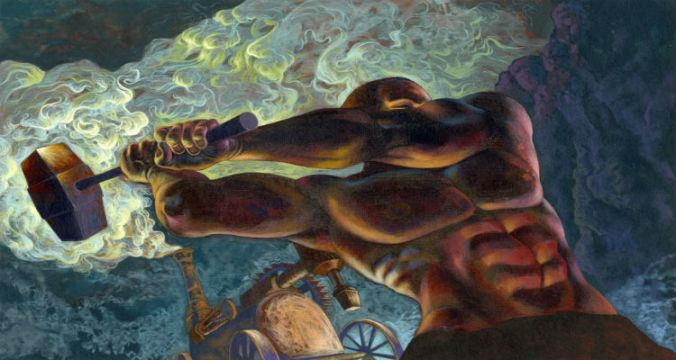 Yes, this comment has little to do with ethics, but it’s so interesting as a supplement to the main post that it deserves greater circulation.

Here is Pennagain’s fascinating Comment of the Day on the weekend’s post, Racist Political Correctness, Casting Ethics, Double Standards, And The Rock:

I knew there were at least two versions of the song, “The Ballad of John Henry,” but I’ve so far found dozens more online, most of them having umpteen verses, and a work-song rhythm – the most basic of which my 7-year-old self stomped in that driving stop-rhythm around the classroom (chanting?), with that hammer-driving oomph! at the end of each line, to lyrics like “gonna die with the hammer in mah han’, Lord, Lord”.

For what it’s worth, a “real” John Henry is pretty well authenticated in at least one version of the story, ending fatally at the C&O’s Big Bend Tunnel in Talcott, West Virginia.

From KPBS’ “The African-American Railroad Experience”, built on Theodore Kornweibel’s photographic history: The entire southern railroad network built during the slavery era was built almost exclusively by slaves. Some of the railroads owned slaves, other hired or rented from slave owners [later from contracted freedmen or convict work-gangs]. And. . . women as well as men were actually involved in the hard, dangerous, brutal work. … several of the song versions finish with John Henry telling his wife to pick up the hammer and continue the job.

Negative evidence of Henry’s race would be that none of the many, many verses of the songs (recorded by 38 singers besides Ives) nor folk references – negro dialect aside (arguably stretched to “Suthun,”) – refer to that figure as being other than black. And as a black man, and a real, live “Everyman” working-man’s hero, he is proudly and fiercely claimed by South Carolina, Alabama, Virginia, Georgia, Kentucky . . . and Jamaica. END_OF_DOCUMENT_TOKEN_TO_BE_REPLACED

(Here was a previous one…)

Dwayne Johnson, the action hero known as The Rock, announced last week that he’ll be producing and starring in the film “John Henry and the Statesmen” about the black folk hero who died after defeating a steam-driven machine that supposedly would lay track faster than human beings could. Johnson, one of the top drawing box-office stars in 2017 and 2016, said John Henry was one of his “childhood heroes” and that his father, former pro wrestler Rocky Johnson, used to sing “Big John” to him before he put him to sleep as a kid.

Well, I don’t understand the “Big John” reference at all. The Jimmy Dean hit (yes, the sausage guy) was about a mine worker who dies saving his colleagues in a cave-in, and there was nothing in the song suggesting he was black, just BIG, like Dwayne Johnson. Here’s the song…