1. A bad habit, like picking your nose in public, but more harmful. At some point, when I’m back to feeling strong,  spiffy, and more or less immune to nausea, I am planning on posting an overview of the 2016 Post-Election Ethics Train Wreck, the major feature of which has been the Angry Left-sparked acceptance of denigrating our nation’s leader in personal terms on a daily basis. As I have found on social media, refusing to participate in this divisive and self-destructive national pastime gets you attacked, and calling attention to how wrong and stupid it is gets you accused of being a racist, a xenophobe, or worse, someone who takes orders from Sean Hannity.

Of late I’ve been randomly calling various social media fools on their bad habit; some are “friends,” some are “friends of friends.”  The news media literally presents a “let’s hate President Trump for this” item every day, and yesterday’s was that the President, indulging his peculiar trolling obsession, said that he was thankful for himself. ( I thought that was pretty funny, myself. If I were President and the news media refused to give me credit for what I was doing right and the policies that appeared to be working, I might make a similar assertion just to show that the barrage of endless, often unfair criticism wasn’t getting to me.) One Facebook friend posted the article, and the predictable pile-on transpired, with one creative soul writing, searching for a wave of “likes” so she would know that she had signaled her virtue sufficiently, wrote, “He is a self-centered boor!” I replied,

Why do you feel it is necessary to spew out ad hominem insults to the President of the United States on a regular basis? Are you just fishing for favor from the large majority of angry Trump-haters on Facebook? Yeah, he’s a self-centered boor, and this was evident, oh, ten years ago at least. The necessary number of your fellow citizens decided to elect him him President anyway, and the process is that those who disagree nonetheless respect the process and their fellow citizens and extend at least a minimal level of respect for the office. I’m not a Trump fan, to say the least, and I am a lifetime student of the Presidency and its occupants: in my assessment, Barack Obama was an utter failure as POTUS and a very damaging one as well. He was (and is) also an arrogant narcissist. This was also obvious early on, but I didn’t go on Facebook repeatedly to call him names.It has no positive effects to do so, and just unnecessarily makes civil discourse difficult.

2. Progressives are trying to do the same thing here through social media. From Bloomberg: END_OF_DOCUMENT_TOKEN_TO_BE_REPLACED 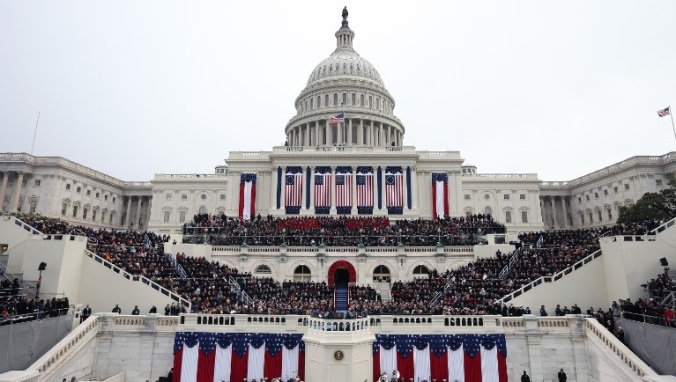 In preparation for this post, I just read over the post from December 5 titled “Reasons to be Happy About the Election of Donald Trump?” I wanted to see if any of those reasons on the list, beginning with three that I endorsed from the Glenn Reynolds essay with the same name, without the question mark. Here are the ten:

1.  “Killed off dynastic politics, at least for now.”

2. “Kept Hillary out of the White House.”

3. “Crushing the media’s sense of self-importance”

4. His election, and Clinton’s defeat, pushes back against group identification politics.

5. It demolishes the propaganda that Barack Obama was a successful President.

6. It might spur more citizens to vote next time.

7. Trump’s victory showed that cheating to win, and behaving as if the ends justify the means, still don’t go down well with a lot of the public.

8. The entire Clinton saga has been predicated on their belief that you can fool enough of the people enough of the time, along with a well-practiced regimen of deny-deny-deny. lie, obfuscate, stonewall, accuse and delay, to get away withe all manner of unethical conduct while achieving wealth and power. Finally, it didn’t work. Hooray.

9. Trump’s election exposed, and is exposing, the hypocritical, anti-democratic, bitter, ugly, hateful side of progressives and Democrats.

10.  It is the kick in the teeth of political correctness that this restrictive, arrogant, smug and stifling cultural trend had been begging for.

“I have not changed my analysis that the price we will pay for these boons is likely to be exorbitant and painful at best. Nonetheless, they are still things to be grateful for, and not insubstantial.”

Almost two months later, having experienced the Trump transition and observed the horrifying 2016 Post Election Ethics Train Wreck, which of these ten bear amendment or repeal? All but a few are as accurate now as then. #9, relating to the Democratic and progressive freak-out and what it represents, has intensified since December 5 and has been longer-lasting and more outrageous than anyone could have expected. Reynold’s item #3 about the election crushing the news media’s sense of self-importance was clearly wishful thinking, for it joined the embarrassing and destructive Democratic reaction to the election rather than learning anything. Fools.

Finally, there is #5. Trump’s election should have demolished the mythology that Obama has been a successful President, because he obviously has not been, and if he had been successful, Hillary Clinton would be about to be sworn in today.But Barack Obama, who like Donald Trump lives in his own narcissistic fantasy world, exited with a series of self-lauding propaganda lines—some issuing from the mouths of his team, like John Kerry—that the news media and punditry have treated as if he were a burning bush. No, Obama improved race relations! His was a scandal free administration! He did most of the things he wanted to do, and if it wasn’t for obstructive Republicans, he would have done much more! Citizens who weren’t happy and voted against Democrats just didn’t understand how well off they are! America’s standing in the world is terrific!  He is proud of his handling of Syria, and those 400,000 dead don’t prompt any regrets! This has been followed by jaw-droppingly dishonest puff-pieces by writers who should know better.

Ann Althouse published a link to this article linked by Instapundit, and Prof Reynolds distilled his own seven reasons “to be happy” about the election upset. Four of the seven reasons are dubious or premature—“he could still blow it,” writes Reynolds. Ya think? He hasn’t been inaugurated yet!—but three, at least, have validity:

1.  Killed off dynastic politics, at least for now. If Hillary had won, 4 of the last 5 presidents would have come from two families. That’s not healthy.

2. Kept Hillary out of the White House. She’s amazingly crooked even by DC standards, and amazingly inept even by DC standards as well. Debacles galore have been prevented by keeping her out. Plus, a Clinton presidency would have allowed the completion of the Obama Administration’s weaponization of the federal government and possibly ensured one-party rule for decades. And at the very least, it would have allowed the sorry gang that Obama and Clinton brought in (go read the Podesta emails!) to bore in for four to eight more years….

5. Crushing the media’s sense of self-importance: They thought they were going to hand this election to Hillary. Now they’re realizing just how few people like or trust them, while Trump bypasses them using Twitter and YouTube. As I’ve said before, in the post-World War II era, the press has enjoyed certain institutional privileges based on two assumptions: (1) That it’s very powerful; and (2) That it will exercise that power responsibly, for the most part. Both assumptions have been proven false in this election cycle. Like many of the postwar institutional accommodations, this one will be renegotiated under Trump. It’s past time. After getting spanked in 2004 over RatherGate, the press realized with Katrina that if they all converged on the same lies they could still move the needle. Now they can’t.

None of these should be enough to pronounce oneself “happy” that we have elected a President who prior to his election displayed no fitness for office whatsoever, and an absence of such basic requirements of competent leadership as self-control, judgment, decorum, the ability to speak clearly, and knowledge of the Constitution. However, since Reynolds got a start on a list of silver linings to the Trump election cloud, let me complete one. I’ll call the Instapundit’s #5 the Ethics Alarm #3 and take it from there. I reiterate that even the whole list doesn’t turn this sow’s ear into a silk purse, but Trump’s election still has  up-sides that we can identify immediately. END_OF_DOCUMENT_TOKEN_TO_BE_REPLACED