Indiana State Rep. Vanessa Summers. (All right, not really, but I couldn’t resist. Read the story and you’ll get it.)

Can it get worse than this? During the debate  in the Indiana House  over the Religious Freedom and Restoration Act,  state Rep. Vanessa Summers, (D-Indianapolis) rose to set a new record in outrageous race-baiting.

“I told [Republican colleague] Jud McMillin I love his son, but he’s scared of me because of my color.”

Responding to a rumble of protest from her assembled colleagues, Summers insisted, “It’s true.” When challenged on the assertion later. she defended her accusation, saying:

“He (the eighteen-month-old child) looked at me like I was a monster and turned around and cried. And I told him (McMillin) you need to introduce your child to some people that are dark-skinned so he will not be scared.”

There are so many take-aways from this episode that it’s difficult to know where to begin, or where to stop.

END_OF_DOCUMENT_TOKEN_TO_BE_REPLACED

The most interesting aspect of ethics is at the margins, those situations where absolutists are challenged to hold to their principles because of unforseen variations that no general analysis could anticipate. The absolute ban on torture as unethical becomes shaky under the “hidden nuclear bomb” scenario.  Capital punishment opponents find that their compassion evaporates when asked whether Hitler or bin Laden deserved execution.

This is the Ethics Incompleteness problem, which I last wrote about at length in March of 2014:

“The human language is not sufficiently precise to define a rule that will achieve its desired effects, that is work, in every instance. There are always anomalies around the periphery of every normative system, no matter how sound or well articulated. If one responds to an anomaly by trying to amend the rule or system to accommodate it, the integrity of the rule or system is disturbed, and perhaps ruined. Yet if one stubbornly applies the rule or system without amendment to the anomaly anyway, one may reach an absurd conclusion or an unjust result. The Ethics Incompleteness Principle suggests that when a system or rule doesn’t seem to work well when applied to an unexpected or unusual situation, the wise response is to temporarily abandon the system or rule and return to basic principles to find the solution. No system or rule is going to work equally well with every possible scenario, which is why committing to a single system is folly, and why it is important to keep basic ethical values in mind in case a pre-determined formula for determining what is right breaks down.”

I was watching the Jeff Goldblum remake of “The Fly” (written and directed by David Cronenberg) last night, and rather than being properly horrified by Geena Davis’s nightmare of giving birth to a yard long fly larva, I found myself wondering how anti-abortion absolutists would handle her unusual dilemma. The film follows the tragedy of scientist Seth Brundle (Goldblum ) who has developed a means of teleportation. The process involves a computer breaking down a body, then transmitting the atoms electronically to a receiving “pod,” and reassembling them there. Unfortunately, when Seth tests the device on himself, an unnoticed fly gets into the sending pod, and the result is a version of Brundle that has fly DNA mixed in. (In the memorably campy Vincent Price original, what arrived in the receiving pod was a man with a giant fly head and a fly with a tiny human head.) Gradually Brundle mutates in form and mind into a monstrous hybrid, but before he knows what has happened to him, he impregnates girl friend Davis. Soon she realizes that something with insect DNA is gestating inside of her, though all tests show a healthy human embryo. Not surprisingly, she wants an abortion.

Would those who argue that abortion is murder maintain that she shouldn’t be able to have one, or that aborting the fetus is wrong? Let’s make the problem harder: let’s say she only learns that she has a fly-baby in the third trimester, when our laws wil not permit abortions unless the mother’s life is in peril. Some questions: END_OF_DOCUMENT_TOKEN_TO_BE_REPLACED 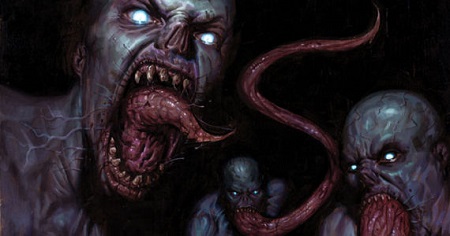 The FX cable networks ultra-creepy, disturbing and often disgusting series “The Strain” has begun raising ethics issues, as good science fiction (this is a horror-science fiction hybrid) is wont to do. The last episode, “It’s Not For Everyone” provided its characters with one ethical dilemma after another. [SPOILER ALERT!!] Arguably, all of them were botched. END_OF_DOCUMENT_TOKEN_TO_BE_REPLACED

Wait! I’ve got an even better idea! How about having toddlers in fake boobs and butt pads FIGHTING EACH OTHER!!!

Bill Verst has asked a Kentucky court to grant him sole custody of his daughter Maddy Verst, now 6, who gained infamy on TLC’s vile reality show“Toddlers & Tiaras” when her mother had her appear in a kiddie beauty pageant dressed as Dolly Parton, with a padded bra and butt pads.

Good. I hope he wins.

This is nothing short of child abuse, and represents exploitation of the very young for an adult’s own (sick) gratification. It may not be quite as despicable as having toddlers duke it out at day care, but it’s close. A court-appointed psychologist agreed with Verst that his estranged wife’s sexualization of their daughter showed she was an unfit parent, and recommended that a judge make Verst the girl’s sole custodial parent.

I’m sure it will not surprise you to hear that Maddy’s Mom, Lindsey Jackson, doesn’t get it. She told reporters, END_OF_DOCUMENT_TOKEN_TO_BE_REPLACED

Dr. James D. Watson, Nobel Prize winner, will always have a place among the highest echelons of scientific achievement, no matter what thoughtless and dangerous things he says. Still, the co-discoverer of the double helix is slowly tarnishing his reputation by a series of gaffes. A few years ago, he opined that there was no way to avoid the conclusion that African-Americans just weren’t as intelligent, on average, as whites: the predictable uproar sent him into retirement. Now, as Watson reaps the well-deserved bounty of career honors in his eighties, he is endorsing the retreat from the standards of medical research ethics originally inspired by the diabolical human experimentation performed on helpless adults and children by nightmarish Nazi researcher, Dr. Josef  Mengele. Mengele believed that human beings could be reasonably sacrificed if the benefits to society and humanity generally were great enough, in his estimation, of course. Apparently, so does Watson. END_OF_DOCUMENT_TOKEN_TO_BE_REPLACED