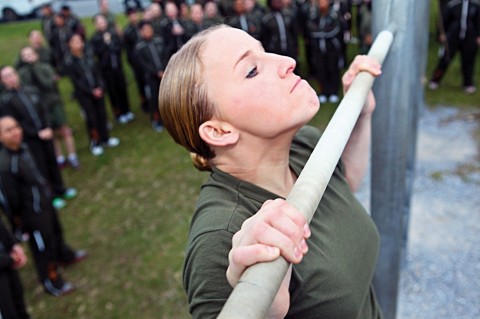 In 2013, I wrote about what appeared to be a retreat by the Marines in the face of pressure to admit more women into the Corps. At the time, it looked like the Marines would be joining a shabby parade.

For example,  some fire departments have allowed political correctness, feminist threats, irrational diversity ideology and fear of “disparate impact” lawsuits  to lead to their lowering of fitness standards to allow more women to be firefighters, if weak and dangerously unqualified ones.

The USMC is having none of that, apparently, despite itys tactical delay in 2013. Accepting the new policy that now allows women to qualify for combat duty, the Marine Corps has established new fitness requirements that have weeded out six of seven female recruits as well as forty out of about 1,500 male recruits who failed to pass the new regimen of pull-ups, ammunition-can lifts, a 3-mile run and combat maneuvers required  to be certified combat-ready.

That’s fine. It would be fine if 6 out of 7 male recruits failed. There should be no affirmative action when diversity for diversity’s sake results in a less effective work force regardless of the tasks involved, but especially when putting thumbs, fists and feet on the scales will get people killed.

In fact, in a decade or so, when gene splicing, changing cultural norms, elective breeding and the unconditional surrender of the male gender in the War Against Women results in the average American woman being 6’2 and looking like this… END_OF_DOCUMENT_TOKEN_TO_BE_REPLACED