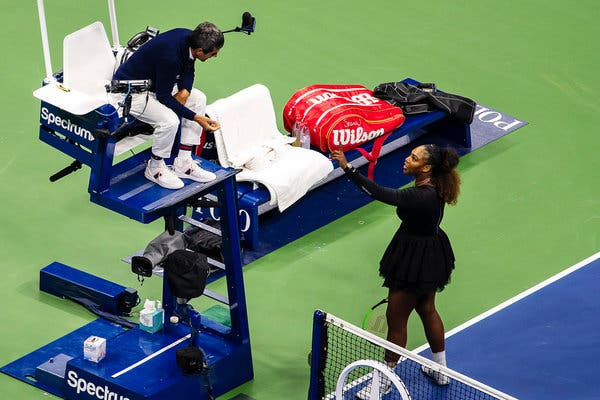 And tennis is supposedly one of the most ethical sports.

This weekend’s U.S. Open women’s final opened up so many cans of ethics worms that they should be squiggling for weeks.

Here is the New York Times report in part:

Anger, boos, tears and an accusation of sexism overshadowed a remarkable victory by Naomi Osaka, a rising star who became the first tennis player born in Japan to win a Grand Slam championship.

Osaka soundly defeated her childhood idol, Serena Williams, 6-2, 6-4, in the women’s final of the United States Open on Saturday, blocking Williams from winning a record-tying 24th major singles title. But the match will long be remembered for a series of confrontations between Williams and Carlos Ramos, the match’s chair umpire, who issued three penalties against Williams in the second set, after Osaka had established her dominance.

The first was a warning after Ramos felt Williams was receiving instructions from her coach, Patrick Mouratoglou, from the stands, which is against the rules. Williams was offended by the implication that she was cheating, and she demanded an apology. Later, after losing a game, she smashed her racket on the court, incurring a second penalty and the loss of a point. Finally, after she called Ramos a “thief” for taking the point from her, Ramos cited Williams a third time, resulting in the loss of a game. Williams’s anger intensified, and she pleaded for help from the tournament referee, Brian Earley, and the Grand Slam supervisor, Donna Kelso….

But what should have been a moment of uninhibited joy for Osaka turned into tears of sadness. The postmatch celebration was tarnished by the angry booing from fans upset over what they perceived as Ramos’s unfair treatment of Williams, and amid the cacophony, amplified by the closed roof because of rain, Osaka pulled her visor down over her face and cried….

In the second game, Ramos spotted Mouratoglou urging Williams to move up, and Mouratoglou conceded that he was, in fact, coaching. But he argued that it is done by every coach in every match and that the warning was the cause of what followed. He said Ramos should have quietly told Williams to inform him to cut it out. “That’s what umpires do all year,” the coach said, “and it would have ended there, and we would have avoided a drama that was totally avoidable.”

Williams approached the chair to tell Ramos that it was a “thumbs-up” gesture and that she would never accept coaching on court, which is against the rules of Grand Slam events. “I don’t cheat to win,” she said in a stern tone. “I’d rather lose.”

During the next changeover, tensions seemed to simmer down during a civil exchange when Williams explained to Ramos that she understood he might have interpreted some coaching, but that none actually existed.

Williams went back on court, held her serve in that game, and then broke Osaka’s serve to take a 3-1 lead in the second set. If she could have consolidated that break, it might have turned the flow of the match. But Osaka broke right back, and after the game ended, Williams destroyed her racket by throwing it to the court in anger. That resulted in a racket abuse penalty, a second code violation, for which the penalty is a point. Osaka would start the next game ahead by 15-0. When Williams realized that, she argued more and demanded that Ramos apologize to her and make an announcement to the crowd that she was not receiving any coaching. Ramos, known for his no-nonsense approach, did not relent.

When the next changeover came, with Osaka leading, 4-3, Williams, still visibly distraught over what she perceived as unfair treatment, told Ramos that he had stolen a point from her and called him “a thief.” For that, Ramos gave Williams a third code violation, which meant she lost a game. Without swinging her racket, Osaka was now ahead, 5-3, and one game from the championship. Williams did not appear to realize that Osaka had been given the game until she reached the baseline again. Now fuming, she returned to the chair and demanded to speak to Earley and Kelso. Fighting back tears as the crowd yelled, hooted and booed, Williams pleaded her case. She said the treatment was unfair and argued that male players routinely behave in the same manner without facing penalties.

“There are men out here that do a lot worse, but because I’m a woman, because I’m a woman, you’re going to take this away from me? That is not right,” Williams told one official. Later, at a post match news conference, she accused Ramos of sexism for issuing a code violation for her “thief” accusation….

As the players stood next to each other, fans booed and Williams, seeing how upset Osaka was, moved over and put her arm around the new champion and then pleaded with the fans not to boo.

Osaka, in her speech, apologized to the fans, acknowledging that most of the fans were rooting for Williams in her quest to set a career record.

Now this, from the Sporting News:

Patrick Mouratoglou admitted to coaching Serena Williams during the U.S. Open final, but believes she never received his message….Mouratoglou said he had attempted to help Williams, but added coaching was common in almost every match.”I’m honest, I was coaching. I don’t think she looked at me so that’s why she didn’t even think I was,” he told ESPN.

“But I was, like 100 percent of the coaches in 100 percent of the matches so we have to stop this hypocritical thing. Sascha (Bajin, Osaka’s coach) was coaching every point, too. “It’s strange that this chair umpire (Carlos Ramos) was the chair umpire of most of the finals of Rafa (Nadal) and (his uncle) Toni’s coaching every single point and he never gave a warning so I don’t really get it.”

If you read Ethics Alarms with any regularity at all, you should be able to predict some of the commentary here, if not all of it.