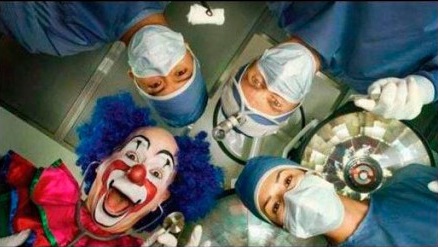 “A few moments later, the anesthesiologist walks in the room and asks, ‘What do you got?’ Dr. Canby says, ‘Vaginal delivery. Uterine atony. External massage failed. Give her some ketamine.’”…I look at Mrs. Lopez—her eyes are half-closed and vacant. Dr. Canby instructs me to hold her knee. A fellow medical student holds her other knee….Canby then performs an internal bimanual uterine massage. He places his left hand inside her vagina, makes a fist, and presses it against her uterus. I look down and see only his wrist; his entire hand is inside her. Canby puts his right hand on her abdomen and then massages her uterus between his hands. After a few minutes, he feels the uterus contract and harden. He says something like, ‘Atta girl. That’s what I like. A nice, tight uterus.’ And the bleeding stops. The guy saved her life…But then something happened that I’ll never forget. Dr. Canby raises his right hand into the air. He starts to sing ‘La Cucaracha.’ He sings, ‘La Cucaracha, la cucaracha, dada, dada, dada-daaa.’ It looks like he is dancing with her. He stomps his feet, twists his body, and waves his right arm above his head. All the while, he holds her, his whole hand still inside her vagina. He starts laughing. He keeps dancing. And then he looks at me. I begin to sway to his beat. My feet shuffle. I hum and laugh along with him. Moments later, the anesthesiologist yells, ‘Knock it off, assholes!’ And we stop.”

This is an operating room anecdote related in an anonymously authored article published this week in the Annals of Internal Medicine, a respected medical journal. The publication says that the piece is intended to shine light in a dark corner of the medical profession. Oh-oh. The essay is anonymous, I assume, because the author is afraid that there would be professional repercussions from his revealing this—what? Bad habit? Dirty secret? Crime? Reason for us to go stark, raving mad? END_OF_DOCUMENT_TOKEN_TO_BE_REPLACED

Are TV doctors entertainers, journalists or doctors? In a way the question doesn’t matter: if they are doctors, then they are obligated to follow medical ethics and the standards of their profession at all times, no matter what else they may be taking compensation for. This is why “Dr. Oz” is ducking the issue when he tries to avoid accountability for pushing quack remedies on his TV show (if it ducks like a quack…) by arguing that he isn’t practicing medicine, but engaging in entertainment. He’s still a doctor, every second of his life, once he takes that oath.

CNN’s Dr. Sanjay Gupta has largely steered clear of ethical issues in his tenure as the network’s medical expert. Not entirely, however; for example, in 2009, he was prominently mentioned as a possible Surgeon General, and was in discussions with the White House while continuing his reporting on the air, raising real and potential conflict of interest concerns. The most recent controversy is more serious. END_OF_DOCUMENT_TOKEN_TO_BE_REPLACED

If you set out to defend ethically indefensible conduct in print, you better be able to do a better a job of it than this.

Alexandra Robbins, in an op-ed causing quite a bit of controversy in the Washington, D.C. area, attempted to not only justify the despicable conduct of medical professionals deriding and ridiculing their unconscious patients, but to sanctify it, arguing, lamely, that doctors and nurses are mocking the unwitting and vulnerable human beings who have placed their lives in their hands in order to “rejuvenate [the medical personnel] and bond them to their teams, while helping to produce high-quality work. In other words, the benefits to the staff — and to the patients they heal — outweigh occasional wounded feelings.”

Robbins’ protests of virtue amount to a desperate raid on the Ethics Alarms Rationalization List, which, as always, operates as virtual Rotting Ethics Detector, or RED. If you find yourself thinking these corrupting self-delusions, you’re on the verge of unethical conduct; if you find yourself saying them, you’ve applied for membership in the Dark Side, and if you are so rationalization-polluted that you proclaim them in print, like Robbins, you shouldn’t be trusted to mail the water bill, much less to cavort in the operating room.

Rationalizations aren’t the only ethical problem with her loathsome essay. The entire thing is a Jumbo, denying the blatantly undeniable. “Oh, no!” readers are told. “We aren’t being disrespectful to patients when we mock their weight, sex organs, or the maladies that placed them in pain, peril and in our care!” Robbins expects us to believe that insults constitute “non-destructive coping measures” that help nurses and doctors “provide the best possible care, even if those methods might seem unprofessional outside of the health-care setting.”

[I am tired, having engaged in a knockdown, drag-out session on legal ethics with a lively group of Federal bar practitioners. This was not the issue I wanted to come home to for the last post of the day. In fact, I gave up and am posting it this morning. Funny, the issue isn’t any easier now than it was yesterday.]

Charles Taze Russell, founder of Jehovah’s Witnesses, and still getting kids killed since 1879.

A pregnant woman who was a Jehovah’s Witness checked into a Sydney, Australia hospital suffering from leukemia. She directed the staff that her treatment could not include blood transfusions, as her religious beliefs forbade them. She suffered from acute promyelocytic leukemia (APL), which is treatable, and often successfully. According to The American Cancer Society, “more than 90% of patients with APL go into remission with standard induction treatment.” Pregnant women with the cancer have an 83 percent remission rate, and their babies have a high rate of survival when their mothers are diagnosed in their second or third trimesters.

In the end, the fetus and the mother died for want of proper treatment.  “Staff were distressed, grappling with what was perceived as two ‘avoidable’ deaths,” doctors at the Prince of Wales Hospital in Australia wrote in a letter published this month in the Internal Medicine Journal.

Well, they should be distressed: they aided and abetted negligent homicide.  END_OF_DOCUMENT_TOKEN_TO_BE_REPLACED 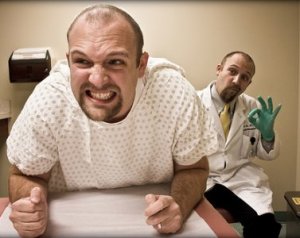 “Your secret is safe with me, but I have to ask…what that stolen Renoir doing up there?”

Jeff Long scores his first Comment of the Day with a welcome excursion into the thickets of medical confidentiality. As I expected, many readers were troubled by my support of strict patient-doctor confidentiality as dictates by AMA medical standards. Jeff does an excellent job elaborating on why I (and the professions like law, medicine and the clergy) take the position they do. In professional relationships, trust is essential, and you can trust professions that approve of breaching confidentiality when a damaging secret is involved.

“First, with regard to Matthew’s example of the cheating spouse who contracts an STD, I think it would probably be difficult to come up with a better example of “the system working as intended.” In the world where doctors respect confidentiality, at least one person gets treated. In the world where the doctor blabs to the world (or at least, to the spouse), there’s a good chance that nobody does. In fact, if the cheater forgoes treatment out of fear of exposure, s/he is putting the spouse at even GREATER risk than in the former scenario, since the STD goes untreated and has a larger window in which to infect the spouse. Certainly, the ideal world is the one where the cheater gets treated AND confesses to the spouse, but the onus for that lies with the cheater. It’s not the doctor’s place. END_OF_DOCUMENT_TOKEN_TO_BE_REPLACED

It’s all Greek to “The Ethicist”!

The third New York Times writer to take over the mantle of “The Ethicist” column, Chuck Klosterman, may be the most reliable yet, but he ended up wandering into the ethical weeds in his recent advice to an ethically-perplexed doctor, and engaging in advice column malpractice.

A physician asked him what was his ethical course when a patient divulged to him that his persistent headaches may have arisen from the stress of keeping a secret: he was responsible for a crime that had been pinned on an innocent man. Before the consultation, the doctor had promised his patient that “whatever he told me would not leave the room.”  Now the physician was having second doubts, and wondered if he was right to keep the confidence to his patient at the expense of an innocent man’s freedom and reputation.

“I would advise the following: Call the patient back into your office. Urge him to confess what happened to the authorities and tell him you will assist him in any way possible (helping him find a lawyer before going to the police, etc.). If he balks, you will have to go a step further; you will have to tell him that you were wrong to promise him confidentiality and that your desire for social justice is greater than your personal integrity as a professional confidant.”

First of all, I don’t understand why a doctor is asking this question to a newspaper ethicist unless he doesn’t like what professional and medical ethicists are telling him. Klosterman, in reaching his reasonable-sounding but flat-out wrong reply, simply discards the concept of professionalism, beginning with the Hippocratic Oath…. END_OF_DOCUMENT_TOKEN_TO_BE_REPLACED 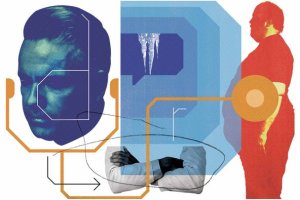 The New York Times had an enlightening article about bias in its Science section this week. Apparently a study of the interactions between patients and their primary care physicians suggests that doctors are more pleasant, encouraging, empathetic, kinder—just nicer, in short—to their normal weight patients than they are to those who are obese.

‘“It’s not like the physicians were being overtly negative or harsh,” said the lead author, Dr. Kimberly A. Gudzune, an assistant professor of general internal medicine at the Johns Hopkins School of Medicine. “They were just not engaging patients in that rapport-building or making that emotional connection with the patient.” …While such expressions of concern and empathy are not remarkable on their own, what was surprising was how absent they were in conversations with overweight and obese patients. And statements like these are no small thing. Studies show that patients are far more likely to follow a doctor’s advice and to have a better health outcome when they believe their doctor empathizes with their plight.

‘“When there is increased empathy by the doctor, patients are more likely to report they are satisfied with their care, and they are more likely to adhere to recommendations of physicians,” Dr. Gudzune said. “There is evidence to show that after visits with more empathy, patients have improved clinical outcomes, so patients with diabetes have better blood sugar control or cholesterol is better controlled.”’