I couldn’t resist this one.

The thread on my post about an Occupy Wall Street protester who apparently was a law school grad and who held a hand-lettered sign blaming his failure to find work, not on the fact that he was standing around in a park holding a sign, but on his law school, has uncovered some unpleasant truths, such as…

Embodying many of these qualities was the recent post of someone with the apparently ethnic name of Iwantoremainanonymous-–Indian, perhaps?—who  had many observations typical of the thread that I unfortunately cannot permit to be posted, because he not only defied  the Ethics Alarms no anonymous comments rule, but, in his wealth of legal knowledge, disputes that I even have the right to make such rules.

I was stunned to discover that “Everybody Draw Muhammad Day,” last year’s mass warped exercise in going out of the way to insult the religious beliefs of fine, upstanding, moral Muslims world-wide,  is supposed to be an annual event. I would have thought that the justifiable abuse heaped on serial Islam-provoker Rev. Terry Jones would have shown the organizers of EDMD the error of their ways (which I correctly pointed out to them here, and here). But no. The self-styled defenders of the undoubted right to use freedom of expression recklessly and badly still claimed to be standing up for the sullied rights of  the “South Park” creators, who last year had their show censored by cowardly and hypocritical “Comedy Central” suits after a threat by some Muslim nut-jobs. For their part, Trey Parker and Matt Stone have happily moved on to the more profitable work of making fun of Mormons on Broadway, because they won’t kill you. END_OF_DOCUMENT_TOKEN_TO_BE_REPLACED

The motion to vacate Judge Walker’s ruling on Proposition 8 has been filed, you can read it here. Since the original post, I have detected some cracks in the formerly near-united front of legal ethicists and journalists deriding Walker’s critics. Some of them are finally, grudgingly, admitting that the Judge might not have handled his potential conflict so well after all, and that the motion is not a frivolous, anti-gay outrage as they originally labelled it.  The most rickety of the rationalizations put forth on Walker’s behalf, advanced by some his most respected defenders, is that he had no obligation to reveal his own sexual orientation by disclosing his domestic arrangement because of its intimate and private nature. Yet the judge voluntarily disclosed it after his decision was in the books, raising a rebuttable presumption that his original silence was to avoid suggestions of conflict, not out of a desire for privacy.

First time commenter Jada adds her Comment of the Day to the discussion: END_OF_DOCUMENT_TOKEN_TO_BE_REPLACED 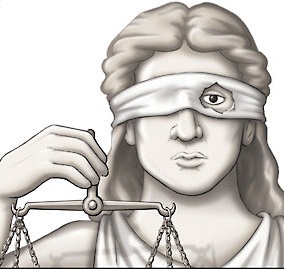 "Oh, all right...as long as we like the decision."

Thanks to the Judge Walker controversy, now have proof that the best legal ethicists in the nation are human. I suppose that’s something.

My colleagues in the legal ethics field are arguing—decreeing, really— that Judge Vaughn Walker’s decade-long same-sex relationship didn’t need to be disclosed before he ruled against Proposition 8 (California’s voter-approved gay marriage ban) because, they say, it created no reasonable doubts about his impartiality. Coincidentally, they also really, really like his decision. But then, so do I. END_OF_DOCUMENT_TOKEN_TO_BE_REPLACED 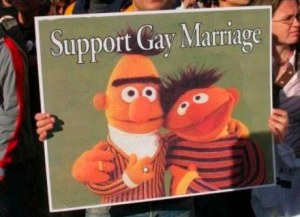 Now that we know about Bert, should Judge Ernie have recused himself?

Judge Vaughn Walker, the Federal District judge who a year ago ruled California’s Proposition 8, which banned same-sex marriages, unconstitutional, was wrong. No, not about the law, which is pretty clearly unconstitutional: his opinion was fair and well-reasoned, and is likely to be upheld on appeal. Walker was ethically wrong in his handling of the delicate issue of his own sexuality, which had raised a controversy about his objectivity and ability to be impartial.

Two weeks ago, following his retirement from the bench, Walker publicly disclosed for the first time that he has been in a same-sex relationship for the past ten years. This changes the analysis regarding the propriety of his ruling on Perry v. Schwarzenegger. Walker had long been rumored to be gay; supposedly “everybody” knew he was gay. My position, as well as that of many others considering the arguments of anti-gay marriage opponents that he should recuse himself, was that sexual orientation could not and should not create a presumption of bias, any more than gender, age, race or marital status. END_OF_DOCUMENT_TOKEN_TO_BE_REPLACED

Rush Limbaugh was enjoying himself hugely yesterday, as he usually does, relating one more way that he has devised to tweak America’s Enemies of Freedom.

The radio talk show king’s topic was electronic cigarettes, those increasingly popular devices that deliver a nicotine jolt while emitting faux “smoke” (it’s only odorless water vapor), all while looking like a real cigarette—the tip even glows red when you puff it. Rush keeps the things handy, he explains, to provide a balm to his nicotine cravings when he is in public places, but even more so, it seems, to annoy anti-smoking zealots. Rush gets a rush when he pulls out the plastic devices and observes reflexive coughs and frowns from those in his vicinity who regard cigarettes as the equivalent of rotting cats. END_OF_DOCUMENT_TOKEN_TO_BE_REPLACED

Northwestern University journalism professor David Protess and his student reporters have been carrying out a heroic and aggressive project aimed at rescuing innocent residents of Illinois’s death row. It was Protess’s Medill Innocence Project that played a major role in influencing former Illinois Gov. George Ryan’s decision to halt all executions. Now, however, the Innocence Project’s methods are now under attack by its own university and Cook County prosecutors, who say the students crossed legal and ethical lines while investigating a decades-old murder.

Prosecutors claim that some of Protess’s students used surreptitious taping in an investigation, secretly recording a suspect in violation of Illinois law. END_OF_DOCUMENT_TOKEN_TO_BE_REPLACED

Ethicist Chris McDonald, who holds forth on his  Business Ethics Blog, has a provocative post on the right to know what you’re eating on another of his blogs, the Food Ethics Blog. I have no quarrel with the main point of his post, which I recommend that you read it here.

A related point in the article, however, not involving ingredients but food preparation, caused me to stop and ponder. Dr. McDonald writes…

“… imagine again that you’re a waiter or waitress. As you set a plate of food down in front of a customer, the customer asks: “Were any ‘minorities’ involved in the production of this food? Do you have any foreigners working in the kitchen?” Appalled, you stammer: “Excuse me?!” The customer continues, “I don’t like immigrants, and I don’t like the idea of them touching my food. I have the right to know what I’m eating!” Does this customer have the right to that information? Most of us, I think, would say no, of course not. She might see that information as really important — important to letting her live her life the way she wants to — but few of us would agree that anyone else is obligated to help her live out her racist values.”

I think the customer’s request for information regarding who is preparing one’s food is a valid one. END_OF_DOCUMENT_TOKEN_TO_BE_REPLACED

When the self-righteous cartoonists of the U.S.A. decided that gratuitously insulting the entire Nation of Islam, moderates and radicals alike, through a pointless April 20 “protest” that required posting thousands of drawings of the Prophet online, I pointed out, to no avail, that this was an irresponsible act with no accountability, and thus cowardly. The Islamic extremists that started this train wreck by threatening the lives of the “South Park”  creators over an episode that pretended to have an image of Muhammad couldn’t attack everyone, so it was completely predictable that they would focus their fury on Molly Norris, the Seattle cartoonist whose satirical drawing coined the phrase “Everybody Draw Muhammad Day.”  And they did. A fatwah has been issued against her, essentially placing her on a death list, and Norris is now in hiding, at the urging of the F.B.I. She has to create a new identity, and may live in fear for the rest of her life.

This is the only tangible result of “Everybody Draw Muhammad Day”—the devastation of the life of the young woman who drew a clever cartoon, and then urged everyone not to make her satiric invention a reality.  Oh, it probably lost America some support among more rational Muslims too, much as the threatened Gainesville Koran-burning would have. I suppose it demonstrated widespread support for columnist Richard Cohen’s fatuous “Americans have a duty to follow through on any offensive use of the First amendment if anyone objects to it, no matter how unnecessary, destructive or thoughtless it may be” argument. I submit to you that neither of these excuse what “Everybody Draw Muhammad Day” did to Molly Norris, and those who organized and participated in the April 20 protest share responsibility for her current plight, and, if she is assassinated, her death.

Predictably, Judge Walker’s decision in Perry v. Schwarzenegger striking down California’s voter approved Proposition 8 has infuriated foes of gay marriage, who have condemned his opinion as judicial activism, a rejection of democratic process, and an agenda-driven farce. Walker himself is being attacked for having a conflict of interest, because he is widely believed to be gay himself. (The belief that a gay judge cannot rule objectively on the issue of gay marriage while a straight judge can is itself an expression of bias.) This is not surprising. What is surprising, at least to me, is that the only substantial argument critics of the opinion can articulate is based on the exact proposition Walker rejected in his opinion: that laws should be able to prohibit conduct based on morality and tradition alone, without quantifiable and verifiable reasons relating to the best interests of society. By insisting that a California law that would withhold a fundamental right—marriage—from a class of Americans must justify itself with reason rather than tradition, Judge Walker ruled that it is ethics, not morality, that should govern American law and justice. END_OF_DOCUMENT_TOKEN_TO_BE_REPLACED