The recent post about Ronald Page, the gambling addict given an open, no limits ATM privilege by Bank of America, with predictable results, suggests two opposite reactions. That’s why it was an Ethics Quiz. I expected my answer that it would be wrong to imprison Page for a crime committed because BOA’s negligence triggered his addictive behavior to be countered by the response Karl Penny expresses, persuasively, here. This is his Comment of the Day on “Ethics Quiz: The Bank, the Addict, and the Broken Egg.”

“Jack, I do volunteer work in prisons with people who have all sorts of substance abuse issues. In addition, I grew up in a family of alcoholics. I say that not to garner sympathy or whatever, but to establish credentials, however unofficial. Addicts know what they are doing, even while they are doing it, they know it. They know it when they are sober, and they know it when they’re drunk (alcoholics, gamblers, drug abusers, etc—they’re all drunks—not very PC, but brutally honest). They are human beings imbued with all that goes into being human and, as such, they command my compassion and concern. But. They know. END_OF_DOCUMENT_TOKEN_TO_BE_REPLACED 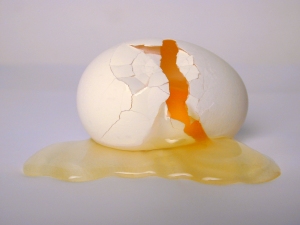 There was a little software problem when Bank of America acquired LaSalle Bank and the two were transferring account data. As a result, LaSalle depositor Ronald Page found that he could make unlimited ATM cash overdraft withdrawals, even though he had only $300 in his checking account.  This tempting state of affairs lasted for seventeen days, and then from December 1, 2008 to May 31, 2009, Page gambled like a man on fire.  Unfortunately for Page and Bank of America—but fortunately for several casinos—Page is a gambling addict. He withdrew, and gambled away, $1,543,104.00

Now the U.S. Attorney’s Office in Detroit says he is seeking to send him to jail for 15 months  after he pleaded guilty to charges of theft of bank funds. He is also going to be required to pay back the money, with interest, guaranteeing poverty for life.