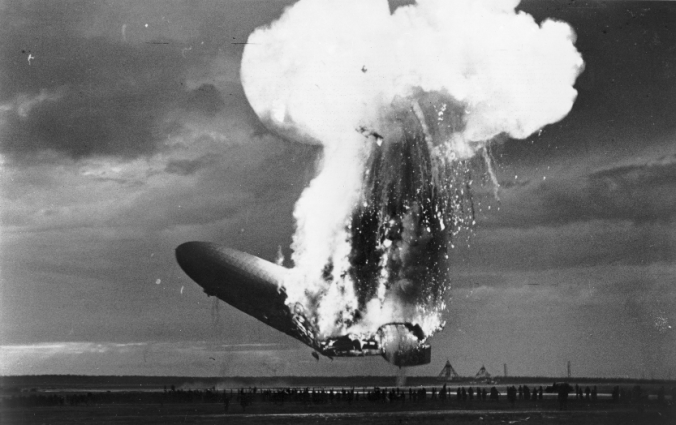 Today is the anniversary of one of the most vividly recalled disasters in U.S. history.  On May 6, 1937, the German passenger airship LZ 129 Hindenburg, a flying equivalent of The Titanic,  burst into flames while trying to dock with its mooring mast at the Naval Air Station in Lakehurst, New Jersey. The conflagration was captured in spectacular and now iconic newsreel footage, as well as in dozens of photographs.

Many  are surprised to learn that there were only were 35 fatalities in the explosion, 13 passengers and 22 crewmen,  among the 36 passengers and 61 crewmen on board (There was one fatality on the ground). The accident looked far more horrible than it was.

The appearance of the accident was so spectacular that it ended the passenger airship business That’s a  classic example of the Barn Door Fallacy, in which the reaction to  predictable and often inevitable disasters leads to  emotional over-reactions, as if by retroactively making an event impossible it can be reversed. Airships were a safe mode of travel (and a luxurious one: remember “Indiana Jones and the Last Crusade”?) in good weather when they were filled with Helium. The Hindenburg and other German Zeppelins used highly flammable hydrogen, making them flying tinderboxes, just waiting for a spark. But once the fireball that the ship became was gasped at world wide, no  explanations could make the visceral image recede. Nobody wanted to get on those things again. END_OF_DOCUMENT_TOKEN_TO_BE_REPLACED

It was nearly 11 PM, E.S.T., and the sudden announcement that President Obama was about to make an important announcement “related to national security” had been hanging in the air for almost a half hour, as TV reporters, hosts and anchors speculated and waited. I was jumping back and forth between two networks when the news began leaking out about what the announcement would be: Osama bin Laden had been killed in a U.S. operation. The professional ethics on both networks promptly evaporated, as Walter Cronkite, David Brinkley and Howard K. Smith looked down from news anchor heaven and retched. END_OF_DOCUMENT_TOKEN_TO_BE_REPLACED