In a statement delivered to fiancial analysts last month, Sea World Chief Executive Officer Joel Manby said that his board of directors has “directed management to end the practice in which certain employees posed as animal-welfare activists. This activity was undertaken in connection with efforts to maintain the safety and security of employees, customers and animals in the face of credible threats.”

Huh? What kind of policy was that? PETA accused Sea World of doing this last summer, but as this is the same group of wackos that wants chimpanzees to be treated by the courts as humans and and has suggested that Punxsutawney Phil be replaced by a robot groundhog, I admit that I didn’t pay much attention. This sounds like a Saturday Night Live skit. I picture a mackerel wearing a disguise and carrying a placard. END_OF_DOCUMENT_TOKEN_TO_BE_REPLACED

"Thank you! And for my next number, 'Nobody Knows The Trouble I've Seen!'"

PETA’s cretinous and offensive lawsuit equating Sea World’s whales with enslaved human beings—just the latest in the organization’s irresponsible “look at us!” tactics—was laughed out of court, as everybody but a breathless NPR interviewer knew it would be. This was yet another example of a lawsuit that any common sense-imbued layman would accurately call frivolous, but a bar association discipline committee would not. A lawyer can ethically take on a lawsuit he or she knows is stupid, foolish, silly, or a “hail Mary” shot, as long as there is a good faith belief that it might/could possibly/ gee, with a little luck and they don’t think about it too carefully prevail. And looking at some of the rulings that come down from various benches and verdicts that creep out of some jury boxes, that means almost no case is unethically frivolous in a legal sense. That doesn’t mean that it is responsible and right for lawyers to help plaintiffs like PETA bring such wasteful lawsuits, just that it isn’t a breach of professional ethics to do so. END_OF_DOCUMENT_TOKEN_TO_BE_REPLACED

Marleen contributes a short and pointed comment to today’s post about PETA’s lawsuit alleging, absurdly, that Sea World’s performing whales are victims of slavery under the definition in the Thirteenth Amendment. Her commentary touches on a rich theme that has been explored on Ethics Alarms in the past: the obligation of issue advocates not to undermine the credibility of an important ethical argument by associating it with unfair, irresponsible or dishonest tactics.

Here is Marlene’s’ Comment of the Day, on “Slaves, Whales, Humphrey the Hippo, and Captive Animal Ethics”;

“PETA makes it difficult for me as a proponent of animal welfare. Pointing to PETA’s ridiculous antics (and this latest one really takes the cake) has become a trump card or Godwin’s Law of sorts when I occasionally discuss animal welfare topics with people. Rants about PETA ensue and the conversation is effectively killed.

“It distresses me that the only strategy they can come up with is to bastardize the courts and the Constitution for some publicity. Shout from the rooftops that captive cetaceans don’t afford us a true ability for observation and study because of the massive (and documented!) ill effects on their health and that it debases us to sacrifice them for our amusement. Play videos of orcas turning on their handlers non-stop. Don’t pull out a cockamamie argument that’s deeply insulting to any peoples familiar with true subjugation.” 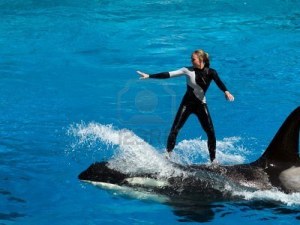 The beginning of the end for this barbaric practice began with the publication of "Uncle Shamu's Cabin"...

Whether or not it is excessively cruel to killer whales to keep them at Sea World and train them to do tricks is an interesting ethical issue that turns on utilitarian principles: are whales as a species better served by the public learning to appreciate them through close contact in zoos than by having them be accessible only in the wild, and does this result justify keeping some whales in captivity, performing like seals? Good question. What isn’t a good question is posed by People for the Ethical Treatment of Animal’s lawsuit against Sea World, suggesting that it violates the Thirteenth Amendment to keep performing whales, because the practice constitutes slavery.