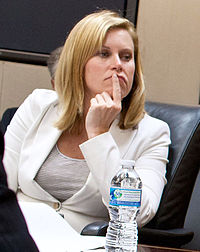 “Wait—why would anyone think Obama’s 2012 campaign spokesperson wouldn’t be capable of fair objective analysis of the 2016 campaign?”

As Erik Wemple, the new media blogger of the Washington Post, reveals, NBC intended to sign on an irredeemably  conflicted and biased “political analyst” for the upcoming campaign and election until her ongoing conflict of interest was made too obvious to hide. When  Politico’s  Mike Allen pointed pointed out that this announcement from the network…

“Stephanie Cutter has joined NBC News and MSNBC as a Political Analyst. She will contribute exclusively on a range of topics across all platforms including Meet the Press, TODAY, Nightly and MSNBC.”

…even the shamelessly partisan NBC had to backtrack. Were they really willing to promote and pay a previous Obama campaign spokesperson as an objective and independent analyst while she was being paid to promote a politically charged Obama agenda item? Apparently not—not yet, anyway. This is, of course, a textbook, unresolvable conflict of interest, though NBC avoided that clarifying phrase. The official announcement from the network cancelling the deal with Cutter before the ink was dry on her contract stated:

“We look forward to Stephanie’s insights on our air during this election year, but she will appear as a guest and not as an analyst due to her leadership role in the battle over the President’s Supreme Court nomination.”

This is a porous band-aid on a gushing ethics wound on the journalism establishment, but good enough, I’m sure, for either the average inattentive TV viewer or the partisan Democrat who thinks, for example, that it’s fine to have Democratic operative Donna Brazile posing regularly as an objective commentator on ABC and CNN. Wemple even seems to praise NBC for making the call, even though it is outrageous that any network would dare to hire a demonstrably dishonest Democratic Party hack like Cutter and pronounce her capable of competent analysis, much less objectivity. END_OF_DOCUMENT_TOKEN_TO_BE_REPLACED

Consider these post-debate quotes from various key figures in the Obama campaign:

” The President did a good job explaining his positions, but give credit where credit is due. Governor Romney had a great night. He was focused and clear, and obviously connected with the audience. He’s a capable adversary, as we always knew. President Obama can and will equal and surpass his performance in the coming debates.”—David Axelrod

” Governor Romney proved himself to be a formidable debater, and the President will have to be more aggressive in countering his arguments, which he certainly has the ability and the ammunition to do.”—Stephanie Cutter

“I didn’t feel I had a poor debate, but I obviously need to have better ones. Sometimes the other guy just beats you, and you have to accept that, tip your hat, and win the next time.”—President Obama

If you haven’t seen these respectful, gracious quotes, all typical of the comments of past candidates and their staff after debate performances that were seen as falling short of their opponents’, there’s a reason. Nobody on the Democratic side, including Obama himself, nor most of the media pundits except those who would be fairly classified as conservative, have been willing to give Mitt Romney any recognition for a well planned, well-executed, professional and compelling debate. “What happened?” Diane Sawyer asked the President. “I had a bad night,” he replied. Romney, you see, had nothing to do with it. END_OF_DOCUMENT_TOKEN_TO_BE_REPLACED

“I sometimes wondered if we even needed a moderator because we had Mitt Romney.”

White House’s spokesperson Stephanie Cutter in CNN’s “spin room” following the first Presidential debate last night, in the wake of a near unanimous media verdict that challenger Mitt Romney had bested the President in style and substance. Moderator Jim Lehrer was criticized by Cutter and others in the President’s camp for being too passive and allowing Romney to control the debate.

The comment, like most of Cutter’s statements to the media this campaign season, was both unfair and dumb:

Personally, I was surprised at the overwhelmingly negative reaction to Obama’s performance. Yes, Romney was better, but the President hardly embarrassed himself. I think the negative reaction by the Democrats and the Obama-promoting media occurred because that they have deluded themselves into believing that Obama’s record is defensible, when it isn’t and has never been: he has an impossible task. The positive reaction of the public to Romney’s debate performance is similarly the result of a misconception. The picture of him they had been fed by attack ads and the media was of a cold-hearted, mean and venal monster prone to sticking his foot in his mouth. The reality was on display last night, and it exposed that cartoon for what it was: a grotesque misrepresentation..

OK, we get it: he’s an idiot. But why is he Vice-President?

Speaking to a large crowd in Virginia estimated to be about 40% African-American, Vice-President Joe Biden proclaimed that “Romney wants to, he said in the first 100 days, he’s gonna let the big banks again write their own rules — unchain Wall Street. They’re going to put y’all back in chains.”

Telling an audience of blacks that the other Presidential candidate and his party plans to put them back in chains is unequivocally dirty campaigning, race-baiting, divisive, and uncivil, the precise kind of campaigning that Barack Obama swore that he would deliver us from in 2008. Now the Obama campaign, as well as his Administration, has embraced divisiveness as a primary strategy, and outrageous scaremongering with a racial bite is also consistent with the current principle-free attack mode by the Democrats, which has included accusing Mitt Romney of being a felon, a tax-evader and a murderer.

Yet the media line on the Biden speech is that “Republicans” have screamed foul. A Vice-President of the United States, running for re-election with an African-American President, telling black Americans that the opposition plans to put them back in chains? Why are just Republicans screaming foul? Why isn’t every decent Democrat, progressive, reporter, pundit and member of the public screaming foul? Is this really what they all consider appropriate, honest, respectful and civil campaigning for the highest offices in the land, by one of the occupants of those offices? END_OF_DOCUMENT_TOKEN_TO_BE_REPLACED