Your ethics ignorance makes me angry, Donald. You won't like me when I'm angry...

The original version of Donald Trump’s self-promoting  reality show competition “The Apprentice” occasionally created a useful business ethics scenario. Once The Donald started using B-list celebrities instead of real aspiring executives, however, the show deteriorated into ego insanity and the kind of freak show conflicts one would expect with participants like Jose Canseco, Joan Rivers and Dennis Rodman.

Surprisingly, last week’s episode blundered into a substantive, if confusing, ethics lesson. It was Donald Trump’s ethical priorities that were exposed, and as should surprise no one, they are as warped as Trump himself.

I can spare you all the details of the episode, which involved the weird assortment of celebs breaking into two teams to see who could devise the better commercial for Entertainment.com, as judged by the website’s execs. As usual, the losing team’s leader and the two team members fingered by her (in this case) had to have a show-down with Trump in “the Board Room” to determine who would be on the receiving end of Trump’s trademark line, “You’re fired!” This time one of the three potential firees was none other that  old Incredible Hulk himself, Lou Ferrigno, who has distinguished himself this season as a perpetual whiner, especially adept at blaming the members of his teams rather than accepting responsibility himself. He was richly deserving of the Trump pink slip in this episode, especially for the over-the-top violent and disparaging language he leveled at a female team mate, comedian Lisa Lampanelli. In the eyes of Trump, however, Lou clinched his demise not by being an unprofessional boor, but by being…honest.

“Who do you think had the better commercial?” Trump asked the former green alter-ego of the late Bill Bixby. It sure didn’t sound like a trick question. Ferrigno responded that the winning team’s commercial was better, an eminently reasonable response given that he and the other two celebrities on the hot seat were there because the commercial they had crafted had been judged as inferior. This, however, was seen by The Donald as a rank betrayal. He fired Lou, in part for his slug-like performance on the assigned task, but mostly, he said, for Ferrigno’s “great disloyalty” to his team.

Some of the people more qualified to moderate a presidential debate than Donald Trump.

Donald Trump is staging yet another debate among the increasingly depressing field of Republican presidential contenders, with The Donald as the moderator, in Des Moines on December 27. This is extremely useful in assessing the field, and everyone in America owes him a debt of thanks, for anyone who agrees to participate in this offensive farce is unqualified to be President of the United States. Trump has created an excellent integrity test.

Several candidates have already flunked.  Newt Gingrich has agreed to participate—granted, there weren’t many questions about his integrity, so this is no surprise. So has Rick Santorum. I am somewhat surprised at this: Santorum holds some truly objectionable views, but integrity has never been one of his ethical  weaknesses. Well, the Trump Debate is a judgment test too—if you agree to go, yours is none too good. Now that I think about it, Santorum’s decision was predictable too. END_OF_DOCUMENT_TOKEN_TO_BE_REPLACED 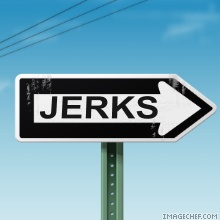 Where Donald Trump is King

I know it’s only May, and I know that Rev. Jones is still out there somewhere, planning on burning a picture of Mohammad or making confetti out of the Quran or some other offensive stunt designed to attract the attention of Fox News and sell some tee shirts. I know Allan Grayson can surface at any time, and that Michael Moore is joining forces with Keith Olbermann, which is a good bet to make both of them more obnoxious. And I know Newt Gingrich, Ron Paul, Michele Bachman and some other GOP candidates for president can be counted on to say or tweet outrageous things in the coming weeks and months. Yes, and Harry Reid is still running amuck, and there are plenty of athletes, singers and actors who will be embarrassing themselves, their profession and their species before the year is out.

Never mind all that. I’m ready to declare Donald Trump the Jerk of the Year.

I’ll admit my bias up front: I think Trump has been a contender for Jerk of the Year every year for at least two decades. Even I, however, never thought he was a big enough jerk to use the developing 2012 campaign for President of the United States—at a critical juncture in the nation’s history, with literally life-and death crises in the nation’s economy, housing market, and job markets, with the Middle East erupting and America involved in three armed conflicts, with a leadership vacuum at the highest levels of the government and with American trust and hope for the future at a record low—for personal ego gratification and to promote his cheesy, freak-show reality program “The Celebrity Apprentice.” But that’s what he did, soiling the news and  political discourse along the way by giving aid and support to the assortment of paranoids, wackos and racists who had been denying that Obama was a natural born citizen. END_OF_DOCUMENT_TOKEN_TO_BE_REPLACED

Just when I had given up on “The Apprentice,” Donald Trump and his show had a genuine ethical controversy. Last week, the 9th of the 10th season, Trump called all the contestants together and revealed that one of them, Anand Vasudev had cheated during the challenge of Week 6, which involved promoting and selling pedicab rides in Manhattan. The 31 year-old financial adviser had secretly texted friends and acquaintances saying, “Come to Trump Towers tomorrow … act like you don’t know me … bring 50 bucks so you can buy a pedi-cab ride and help my team to win …. I’m (project manager).” END_OF_DOCUMENT_TOKEN_TO_BE_REPLACED

It would be wonderful if Steven Slater would go before the cameras and say,

“I want to apologize to Jet Blue and its passengers for my conduct. I was frustrated and emotionally over-wrought, and I wrongly endangered the air travelers, betrayed by co-workers, and embarrassed my employers. I am not a folk hero or a role model. I am ordinary human being who lost control of his emotions, and behaved badly. I am sorry. If my meltdown contributes to a national dialogue that reminds people that we need to be civil patient and kind to one another, then at least something productive will have come out of an incident that I sincerely regret.”

That’s not going to happen. END_OF_DOCUMENT_TOKEN_TO_BE_REPLACED

I know, I know. The ethicist’s equivalent of shooting fish in a barrel.

Nonetheless, even for the notoriously shameless and tasteless real estate mogul, this is a new low. He has recruited Rachel Uchitel for his self-promotion vehicle reality show, “The Celebrity Apprentice.” Uchitel, in case you’ve lost count, was the first of Tiger Woods’ many mistresses to be identified by the press.

Now every attractive woman seeking fame and fortune has a motive to contribute to the destruction of male celebrities’ marriages, to help disrupt  their children’s lives and shatter their sense of security, and to aid and abet self-destructive, dishonest, cruel conduct. If you do it well enough, Donald Trump will make you a star! Soon you can be appearing on other reality shows, making money, hiring an agent, getting photo spreads in the Globe and National Enquirer. All it takes is plenty of greed, a lot of ambition, and no shame. Talent, hard work, skill and intelligence are optional, and maybe even a disadvantage. END_OF_DOCUMENT_TOKEN_TO_BE_REPLACED