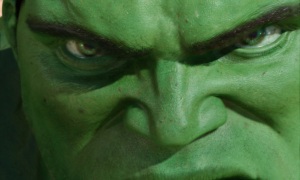 Your ethics ignorance makes me angry, Donald. You won't like me when I'm angry...

The original version of Donald Trump’s self-promoting  reality show competition “The Apprentice” occasionally created a useful business ethics scenario. Once The Donald started using B-list celebrities instead of real aspiring executives, however, the show deteriorated into ego insanity and the kind of freak show conflicts one would expect with participants like Jose Canseco, Joan Rivers and Dennis Rodman.

Surprisingly, last week’s episode blundered into a substantive, if confusing, ethics lesson. It was Donald Trump’s ethical priorities that were exposed, and as should surprise no one, they are as warped as Trump himself.

I can spare you all the details of the episode, which involved the weird assortment of celebs breaking into two teams to see who could devise the better commercial for Entertainment.com, as judged by the website’s execs. As usual, the losing team’s leader and the two team members fingered by her (in this case) had to have a show-down with Trump in “the Board Room” to determine who would be on the receiving end of Trump’s trademark line, “You’re fired!” This time one of the three potential firees was none other that  old Incredible Hulk himself, Lou Ferrigno, who has distinguished himself this season as a perpetual whiner, especially adept at blaming the members of his teams rather than accepting responsibility himself. He was richly deserving of the Trump pink slip in this episode, especially for the over-the-top violent and disparaging language he leveled at a female team mate, comedian Lisa Lampanelli. In the eyes of Trump, however, Lou clinched his demise not by being an unprofessional boor, but by being…honest.

“Who do you think had the better commercial?” Trump asked the former green alter-ego of the late Bill Bixby. It sure didn’t sound like a trick question. Ferrigno responded that the winning team’s commercial was better, an eminently reasonable response given that he and the other two celebrities on the hot seat were there because the commercial they had crafted had been judged as inferior. This, however, was seen by The Donald as a rank betrayal. He fired Lou, in part for his slug-like performance on the assigned task, but mostly, he said, for Ferrigno’s “great disloyalty” to his team.

Donald Trump was the 2011 Ethics Alarms Dunce of the Year, so this is hardly a surprise, but Trump’s complaint made no sense at all, ethical or logical. “I’m a very truthful person, I like telling the truth, but I’m also somebody that’s very loyal,” Trump said by way of explanation. Well bow-wow to you, sir, but loyalty needs to be severely watched and limited, as it is the most abused of the ethical virtues, and the one that has perhaps caused the most pain and suffering of them all. The reason loyalty is generally laudable is because it engenders trust, and thus strengthens the various relationships that create a healthy society. Children should be loyal to parents; citizens should be loyal to their country; soldiers must be loyal to their commanding officers; lawyers are required to be loyal to their clients. Loyalty is tied to the concept of duty, when, because of allegiance, gratitude, reciprocity or professional obligation, we have duties to favor certain individuals over others.  Loyalty, however, is not absolute, even in professional relationships like the law, in which the profession itself is defined by loyalty. Loyalty, taken to extremes–“blind loyalty”—can cause an individual to violate higher principles, and in some cases even harm the object of the loyalty. In the end, the Nuremberg Trials were about loyalty, and how the virtue could be perverted into a human rights catastrophe. German officers, soldiers, judges and citizens chose loyalty to a leader and a genocidal political party over their duties to their nation and the human race.

I am always suspicious of public figures who give loyalty the highest rung on their hierarchy of ethical values. When I hear them, I not only think of Nazi Germany, but the Nixon White House, Bill Clinton’s Cabinet, Organized Crime’s attorneys, Arthur Andersen, and the nurses that assisted in the Tuskegee syphilis studies. I also think of the inner city in Washington, D.C., where teens are gunned down in the streets in front of witnesses who refuse to talk to police, because they don’t want to be “snitches,” or “rats.”

Donald Trump’s message to his “apprentices” and his audience was that loyalty is a superior virtue to honesty. There certainly are situations where that may be true, but this was not one of them by any stretch of the imagination. In fact, Ferrigno owed his primary loyalty, not to his “team” (more about that nonsense in a second), but to Trump, his “boss,” albeit a fictional one. If a professional baseball player is aware that his team mates are taking steroids, what constitutes loyalty—keeping their secret, or telling the manager? Obviously the latter—it is the organization that has the higher claim on his loyalty, and if there is a conflict, the drug-using team mates come in second. In business, a supervisor who asks an employee about a problem on the staff and receives a lie in response should fire the employee for disloyalty.

Is Trump really saying that he expected and wanted Ferrigno to lie to him? There is so much wrong with that line of reasoning:

All this would be true even if there was a team for Ferrigno to be loyal to. There was not, however:

So, as is usually the case, Donald Trump displayed the appalling lack of ethical instincts that have marked his career. He was unfair to Ferrigno, asking him a classic no-win question to which either choice—dishonesty or disloyalty— would get him fired. Trump  misrepresented the rules and objectives of his own show, illustrating what the absence of integrity looks like. He endorsed lying to the boss, a toxic point of view that will nourish a bumper crop of future yes-men, and he elevated loyalty to a status that would make any member of the Crips or Bloods applaud.

The only thing he did right, in fact, was firing Lou Ferrigno.

[Thanks to Kevin Woodside for the top.]