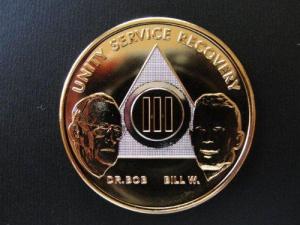 With all the alcoholics in my life, and there are and have been many (some of whom I undoubtedly never knew qualified), today was the first time I ever actually attended a meeting of Alcoholics Anonymous. Indeed, before yesterday I didn’t know I could attend. Many groups have periodic “open” meetings, however, to which friends and family members of alcoholics as well as “anyone interested in learning about alcoholism” are invited. I know a lot about alcoholism, learned the hard way. Now I know more. More important than that, I realize that Alcoholics Anonymous has a great deal to teach everyone…not just about alcoholism, but about ethics.

Every day in America, nearly every hour of the day, thousands upon thousands of informal Alcoholics Anonymous groups meet for an hour in church halls, school cafeterias and every other meeting place imaginable. Of the more than 12 million estimated sufferers of alcoholism, approximately 5 million attend at least one meeting a year, with close to two million attending regularly. As in the group I attended, late in the afternoon on Super Sunday, they are as demographically diverse as America: young and old; all races and creeds; professionals, blue collar and unemployed; rich and poor; male and female, single and married, gay and straight. They share a need for support and understanding as they battle one of the most pernicious and destructive of diseases, and also something else: caring. Everybody listens, everybody empathizes, everybody cares….even though they are relative strangers, and even though every meeting brings a slightly different group.

It is remarkable, and it is inspiring.

The group talks about how the stresses of life are the triggers that can destroy sobriety, and with it health, families, careers, and lives. “Life isn’t long enough for all the misery in it, ” one cheerful elderly man said. Being angry, lonely, tired, frustrated, aggravated, hurt, grieving, frightened…all of these feelings and more can cause a dreaded relapse—-the same conditions, not coincidentally, that lead to good people doing unethical things. The solution, along with following A.A. founder Bill Wilson’s iconic Twelve Steps, is an ethics potpourri: respect, caring, mutual support, selflessness, empathy, humility, responsibility, diligence, patience, accountability, courage, and personal growth. Caring most of all; the members all recognize part of themselves in every sufferer, and in helping the others, know that they are helping themselves as well.

As I sat in the hall, listening to the funny, wise, sometimes heartbreaking stories of the alcoholics, some sober for months and years, some only for a day or two, I was stunned by how clearly that small room with folding chairs was a microcosm of a healthy and ethical society. Ethics, after all, is only learned conduct that we know will make existence better for everyone if we can embrace it, and in making a better world for the rest, we make a better life for ourselves. I thought about how powerful the spirit, compassion and determination to succeed as a group—Number One in the A.A. “traditions” is “Our common welfare should come first; personal recovery depends upon A.A. unity”—could be if it could be applied to living a more honest, selfless, fair and kind life, and actively helping our friends and neighbors do the same. People are driven to A.A. by desperation, to save lives and marriages and jobs when all else may have failed, and they often discover better ways to live, love and treat others as well as new resources to conquer their addiction. The A.A. method and spirit would also work  as well, I believe, if the illnesses it was focused upon was habitual dishonesty, meanness, incivility, and greed. Experiencing an Alcoholics Anonymous meeting is to see how wonderfully caring and wise human beings can be, how devoted to a group’s well-being, when they are sufficiently motivated. If this much goodness and mutual respect can overcome alcoholism, it can overcome almost anything. Disrespectfulness? A snap. Untrustworthiness?

I urge everyone to find an open AA meeting in your community; there is probably one this week, less than ten minutes away. Spend an hour there for two important reasons, both supremely ethical. The first is to make a serious effort to educate yourself about alcoholics, what they endure, how widespread the disease is, and how wrong, cruelly wrong, the archaic notions of character flaws and weak wills are concerning those who suffer from it. These are not weak people, but rather loving and brave people, and someone very much like them is in your life, whether you realize it or not. You owe it to them not to be ignorant, but understanding, and empathetic.

The second reason is to see and hear what I did, and think about how the ways of Alcoholics Anonymous could lead the non-drinkers among us to more ethical lives.

Don’t laugh. I’m thinking about them all.

70 thoughts on “Alcoholics Anonymous and Ethics”