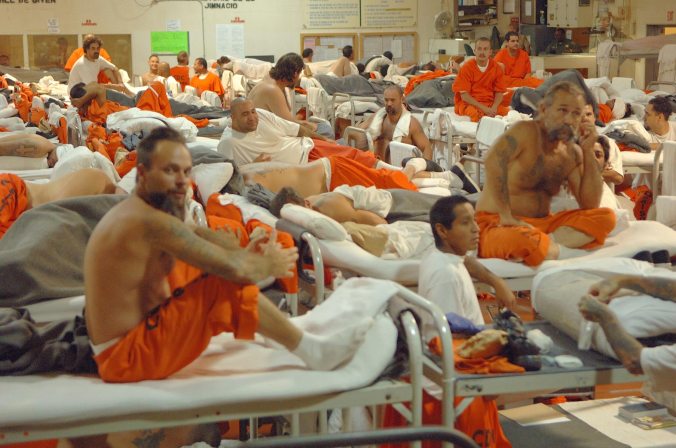 To be more accurate, the heroic component in this instance is the liberal wing of SCOTUS ( Justices Sotomayor, Kagan, Ginsberg, and Breyer) plus the swing vote, Justice Kennedy, who wrote the majority opinion in Brown v. Plata.  The decision upheld a court order requiring California to release a staggering 46, 000 inmates of its prisons, more than a fourth of the those sentenced there. The majority concurred with the lower court’s assessment that California prisons were so obscenely over-crowed that conditions amount to a human rights violation and a breach of the constitutional prohibition on “cruel and unusual punishment.”

Some Supreme Court decisions come down to ethics as much as law, and this was certainly one of those times. At issue from a legal standpoint was  whether federal judges had the power to order the release of state prisoners as a necessary means of curing a constitutional violation. But the brilliant legal minds on the conservative side of the Court’s divide had no problem answering that question in the negative, and persuasively too.  The dilemma is that California’s least sympathetic citizens, its residents of the state’s penal institutions, are being kept in conditions that violate their constitutional rights, and despite many years of knowing about the problem, the state hasn’t found a way to rectify it. More than likely, the state hasn’t had the political will to rectify it, drowning as it is in red ink with a population both averse to taxes and addicted to government-funded goodies. Except for a small handful of prisoner advocates who are traditionally regarded as bleeding heart do-gooders with warped priorities, few citizens anywhere, not just in California, are willing to see their government place prison reform over funding programs for law-abiding citizens.

When elected officials lack the courage and principles to do what’s right despite the selfish desires of voters, as they almost always do, the judiciary must come to the rescue, or rescue will not come. In this case, the draconian solution of releasing criminals is sure to get the voters’ attention, as reports of fifty inmates using one toilet and other conditions redolent of Turkish prisons have thus far failed to do.  The decision will not immediately send drug pushers and wife-beaters back into the streets, because it allows time for officials to continue their (slow) efforts to find a solution. The point is to sharpen California officials’ resolve. Once the issue becomes keeping criminals from running amuck, rather than making sure prisoners don’t have to use a bucket for a toilet and sleep on the floor, the priorities of California’s non-imprisoned citizens can be expected to evolve rapidly.

Brown v. Plata  will take a lot of heat from conservatives who adopt Justice Scalia’s argument that the opinion is “absurd” and that the results of releasing so many inmates will be a disaster—I can almost hear Rush Limbaugh now. Critics will be ignoring the fact that when the United States of America persists in allowing known human rights violations on its own citizens, no matter who they are or what they have done, that is a disaster.

You can read the opinion here.

One thought on “Ethics Heroes: The U.S. Supreme Court”