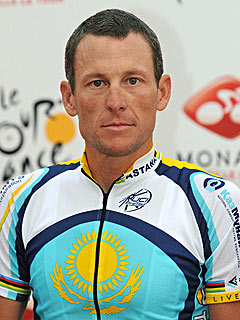 Back when Barry Bonds was still playing baseball, a sportswriter mused about why it was that everyone assumed  Bonds was a performance-enhancing drug cheater despite his protestations to the contrary, while most Americans and sports journalists brushed away similar allegations regarding Lance Armstrong. Both competed in sports with acknowledged steroid abuse problems; indeed, the problem in bicycle racing was presumed to be more pervasive than in baseball. (A few years later, with the banning of multiple Tour winners, the presumption became a certainty.) Both athletes had improbable late career improvements in their performance to reach previously unimaginable dominance in their respective sports. Both had to explain or deflect multiple credible accusations of cheating and circumstantial evidence that suggested that they were doping. Both claimed they had never failed drug tests, and there were good reasons to doubt the denials.

So why was Bonds a villain by consensus and Lance an untouchable hero? The sportswriter explored many theories (Apologies: I cannot locate the article. If someone can, please send it), among them the greater popularity of baseball over cycling, Bond’s startling physical transformation into a behemoth while Armstrong remained cyclist-sinewy,  Armstrong’s inspiring story as a cancer survivor, Armstrong’s philanthropic work,and the fact that Bonds, unlike Armstrong, was black. The biggest difference, however, and to the writer the key one, was that Armstrong acted the role of a hero, while Bonds refused to. Armstrong was friendly and accommodating, while Bonds was angry, intimidating and antagonistic. Armstrong seemed like someone who played by the rules, and who lived his ethical values. Bonds seemed like a rebel, one who wouldn’t hesitate to break the rules for his own benefit. In short, the public wanted Armstrong to be the hero he seemed to be, so they ignored the evidence linking him to performance-enhancing drugs.

The evidence indicating that Armstrong has posed as a legitimate champion, heroic icon and role model for young cyclists while secretly and habitually using banned performance-enhancing drugs is too persuasive and voluminous to deny or ignore. Lance Armstrong is almost certainly a fraud, and it is time for everyone to stop defending him, to mourn the exposure of one more false American hero, and to get about the business of making Lance Armstrong accountable.

On “60 Minutes” last weekend, a former teammate of Armstrong’s, Tyler Hamilton, said he and Armstrong both used banned performance-enhancing substances to cheat in pro races, including the Tour de France. Armstrong also supplied other cyclists with drugs, Hamilton said. Most startling of all, Hamilton said that Armstrong told him he had tested positive in 2001 during a race in Switzerland, but that Armstrong used his influence and resources to bury the evidence. What could Hamilton have meant by that? It seems that Armstrong donated $25,000 to the International Cycling Union at the same time his blood test in Switzerland came up positive. Three years later, he donated another $100,000 to the organization to promote “clean testing.” His, perhaps?

Now at least two of Armstrong’s team mates have testified, under oath, to federal authorities that the cyclist’s squeaky clean image is a lie. Like Hamilton, George Hincapie, one of Armstrong’s closest friends in cycling, also testified to his use of performance-enhancing drugs, “60 Minutes” reported.

Actually, the evidence against Armstrong was Barry Bonds-strong before the “60 Minutes” revelations. In January, Sports Illustrated reviewed the case, and it was depressingly convincing. Now, as Washington Post sports columnist Mike Wise wrote, “Lance Armstrong’s decade-long insistence he is a clean champion feels so forced and hollow now.”

And yet Wise, along with many other writers and a disturbingly high proportion of the public, seem ready to continue to condemn Bonds as a cheater while letting Armstrong off the hook as, well, something better. Observe Mike Thomas, of the Orlando Sentenel, arguing why Armstrong deserves a pass:

“[Armstrong’s] Livestrong cancer foundation has raised more than $400 million. More than 70 million plastic bracelets have been sold. Last year, donations from Livestrong went toward two programs at M.D. Anderson Cancer Center in Orlando. One is the Artists-in-Residence program, in which artists give lessons in photography, painting and writing to patients undergoing chemotherapy. It takes their minds off the stress….In two months, the program has handled about 600 patients. The other program is Cancer Transitions, a six-week series of support groups for cancer patients after their treatment is up. It teaches them about nutrition, exercise and stress reduction.There are all kinds of Livestrong programs, including fertility services for cancer patients.

“None of this would have been possible if Lance hadn’t won all those races, and I don’t see how winning them was possible without EPO [ NOTE: the drug of choice for cyclists, and the drug Armstrong has allegedly tested positive for].

“Does being a noble fraud count for anything?

“Is putting Livestrong at risk worth it?“

Raising millions of dollars based on lies is fraud. The presumption that none, or even less of that money wouldn’t have been raised without Armstrong’s phony pretense of epic athletic greatness is unwarranted. Armstrong’s cause isn’t the only cause. His fake heroics took victory from other cyclists, promotions from other athletes, and contributions from other charities. “Aren’t there more pressing crimes?” asks Thomas, indulging in the most desperate of rationalizations in the scoundrel’s playbook. Not many, no. Armstrong debased his sport, cheated his competitors, robbed his sponsors, deceived his fans and defrauded his contributors, warping their philanthropic choices to the tune of millions of dollars.

This is no “noble fraud..” There are no noble frauds.

Oh, I’m certain Armstrong has deluded himself, just as Thomas and others allow themselves to be deluded, that he is noble, and that the good done by his lies outstrips the bad. All frauds can rationalize their dishonesty, and if Armstrong is not stripped of his medals and publicly busted from icon to lying cheat, every sociopathic swindler waiting to prey on his industry, his customers, his fans or his voters will take it as a welcome green light to deception. Lance Armstrong needs us to accept that the ends justify the means, that lies and cheating can turn out well for all concerned. It’s all right to cheat your way into and through college and medical school, because of all the lives you’re going to save. And its all right to rig that election, because your candidate is going to save the country. And its all right to hide those figures from the SEC, because your company is going to make lots of money for everyone.

Right. This is Lance’s Fallacy.

Lance is no different from any of the other frauds. Even his excuses—well, they’re his supporters’ excuses now, but he’ll be mouthing them sooner or later—are the same. They are Barry Bonds’s excuses too:

•    I had to cheat, because everyone was doing it.

If we let any of these rationalizations persuade us, we are just baring our throats to more predators. But I fear that’s what the public will do with Lance, once they overcome their own state of denial. One reason is that the sportswriters they read are so frequently without any ethical sense whatsoever. Here’s Mike Wise:

“If I am Armstrong today, and I have seen the public tide change after Sunday’s report, I hold my first authentic news conference in more than 10 years. I talk about fending off that deadly disease, how many millions were inspired to overcome their own battle.

“I talk about the millions of dollars raised from those yellow LiveStrong bracelets, and how a man no bigger than an accountant transcended not only his own niche sport but all others as well, becoming a national symbol for perseverance.
“In my money-shot moment, I would look in the camera, a la Tiger Woods, and say I lied because I didn’t want to let down the people who believed in me, or the people who would give generously when they heard my story.

“I would say I lied because, yes, I wanted to win and almost everyone else good or great was doing it in my sport, to the point where blood doping became part of my profession. But mostly I lied because if one more little girl or grandfather fighting their own battle could find the resolve in them to continue like me, if one more caring person could fork over another grand for research, then it would be all worth it. I would conclude by saying I now wish I hadn’t done it, that I feel I duped everyone around me, that my Tour de France victories were not real but my overcoming cancer was, and that’s all that matters.”

Not to be crude, but if I hear that from Armstrong, I am going to throw up. I nearly did just reading it from Wise.

This is what matters, Mike. Armstrong has taken one more big chunk of trust out of a culture that could hardly spare it. He has probably hastened the decline of his reeling sport, which has already lost many of its fans due to the perception that the sport has no integrity and is decided by cheating, This will clinch it. The industries that depend on bicycle racing’s popularity will be devastated. Sponsors will go elsewhere with their dollars. Meanwhile, Lance can either be a role model for young drug enthusiasts, or an example for young cynics. The truth about him will hurt the charities who depended on him, and if they depended on him, he has betrayed them. What matters is that Armstrong is an ethics corrupter as sure as Charlie Rangel, arguing that it is all right to cheat if you do enough good along the way. The number of miscreants, crooks, traitors, human rights abusers and even mass murderers who have made that offensive argument through the centuries are too many to count, and the harm they have done is too massive to measure.

What matters is that Lance Armstrong lied, he cheated, he betrayed and he manipulated people and their emotions, and he did it, first and foremost, for Lance Armstrong’s own fame, fortune and self-interest. Everything else just helped gild his image, make him seem heroic, and protect him from public suspicion.
It is time to take down Lance Armstrong, without mercy, and treat him like any other cheat and fraud, indeed like what he is, one of the most outrageous cheats and frauds in our lifetime. If we don’t, our culture and our values will be worse for it.

9 thoughts on “No Excuses and No Mercy For Lance Armstrong”