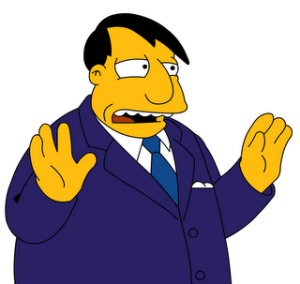 Mayor Quimby is honest about being corrupt. Isn't that good enough?

Rescuing the states’ power to insist on more ethical conduct from their elected legislators, The U.S. Supreme Court ruled Monday that there was no Constitutional prohibition on state rules against legislators voting on issues in which they have a private, personal interests.

The unanimous decision upheld a Nevada ethics law that governs when lawmakers recuse themselves from voting on official business because they might have conflicts of interest. The challenge to the  law came from Michael Carrigan, a conflicted city council member from the Sparks, Nev., who was reprimanded by the state ethics commission after he voted  on a casino proposal though his campaign manager had been hired as a consultant to the project.

The law prohibits a public official from voting on an issue when a “reasonable person” would suspect a conflict because of financial ties or the interest of a spouse or family member. This is the essence of “the appearance of impropriety.” It also includes “any other commitment or relationship that is substantially similar” to those spelled out.  Carrigan had argued that the Nevada’s law was overly broad and that he should be able to vote on the project, so long as he disclosed his relationship with the consultant.

“I’m completely biased and conflicted on this issue and incapable of independent judgment, but as long as everyone knows it, then it’s ethical for me to vote!”

No, it isn’t, though elected officials wish it were that easy. To be relieved of the burden of a conflict of interest, three factors should be in place: an official should disclose the conduct, his constituency and the public should reaffirm their trust in his fairness by waiving the conflict (or consenting to it), and the elected official should sincerely believe that his judgment and ability to do what is best for the people will not be compromised. The fact that the Nevada legislature passed a law prohibiting voting under certain conflicted conditions eliminates the possibility of consent and waiver, because the law specifically states that consent is denied, and waiver will not be made.

What Carrigan argued, under all the legal advocacy,  was that he had a right to be biased, had a right to vote under the appearance of impropriety, and had a right to be influenced by factors other than what was in the best interests of his constituent. The Court’s opinion authored by Justice Antonin Scalia declares that a legislator’s vote on pending bills, and arguments made during debate on such measures, are not a form of free speech that is protected by the First Amendment, not something “personal to the legislator” but something that “belongs to the people.”  A legislator, Scalia added, is entrusted with that authority as an agent of the sovereign voters.

The decision, which was unanimous, upholds the ability of states to make meaningful and effective conflicts of interest laws, which are necessary because, as Council Member Carrigan proves, too many elected officials won’t do the right thing on their own.

You can read the decision in Nevada Commission on Ethics v. Carrigan here.

2 thoughts on “The Supreme Court Saves An Ethics Principle”