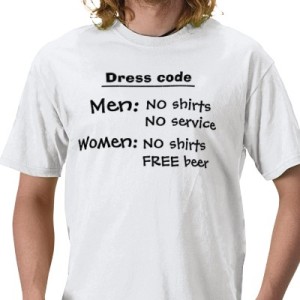 A same-sex couple visiting Dollywood Splash Country with friends and their children was told by a park gatekeeper that one of the women had to wear her T-shirt inside-out because its message—“Marriage is so gay”— “might be objectionable” to some visitors at the “family-friendly” park.

The woman wearing the shirt complied, and raised a complaint later. Her (very valid) point: there were many other visitor wearing T-shirts in the park that could offend someone, including those with Confederate flags and other political messages. Dollywood replied that if a patron had complained about any of those shirts, those visitors would have been asked to cover them too.

Wait—that’s the standard? Any patron can complain about what’s on a T-shirt, no matter how unreasonable the complaint is, and thereby force another visitor to alter his or her clothing? This carries the no-offense, political correctness obsession to a new and ridiculous level.

Meanwhile, Dollywood is applying an incomprehensible, inconsistent and unfair rule. Nobody complained about “Marriage is so gay,” but officials launched a pre-emptive strike. Why is that T-shirt inherently offensive and a rebel flag only offensive if someone complains? Is it because Dollywood caters to only certain species of bigots?

The ethical dilemma: Dollywood has a legitimate non-ethical consideration; unfortunately, it is impossible to accomplish. The park has a legitimate interest in making its theme park a comfortable and pleasant place for leisure, entertainment and relaxing escapism, and thus has a right to prohibit patrons bringing messages and political advocacy into the park when they might upset or annoy others. The problem is that some people are annoyed or offended by almost anything. If the park is going to ban “Marriage is so gay,” it has to ban a picture of a man and woman on a wedding cake, which could be seen as a pro-“Defense of Marriage” Act statement. If Dollywood is going to ban pictures of Osama bin Laden, it has to ban the Obama “Hope” T-shirt, which might offend Glenn Beck fans. If it is going to ban a Mexican flag, it has to ban an American flag. The only fair policy is “No T-shirts with any social, political, or philosophical message or image, perceived or real.”

That policy, however, is calculated to make patrons about as comfortable in Dollywood as they would be in a gulag. Who wants to go to an amusement park with so strict a dress code? There is no middle ground if the park is trying to deal with something as subjective and vague as “offensiveness.” Either ban any message that can make anyone uncomfortable—that is, everything—or pick and choose what is likely to be offensive, an assessment will be inevitably biased and unfair, or accused of being so. In contrast, banning lewd and sexual content is relatively easy. The park can make a reasonable assessment of what crosses the line, publicize it and if some hyper-sensitive patron thinks a T-shirt with a picture of Lady Gaga is offensive, it’s just too bad.

The ethical conflict: there is an ethical issue raised by the wearing of a politically themed T-shirt, as well as by the arbitrary banning of it. Yes, of course—one has the right to wear a shirt  espousing a political or social position. Displaying a political or social statement in a setting with completely apolitical purpose approaches rudeness, however. It is like shouting out one’s political and religious affiliations. Why should I have to hear it? My family is at a theme park—why should you force me to see or listen to an announcement of your preference for open borders, or legal pot, or free health care, or prayer in the schools? These bumper-sticker equivalents don’t persuade anyone; they just declare loyalties and divide us into camps. Nobody should be announcing that they are Republicans, Muslims, transsexuals or Michael Moore fans at Disneyland; if anything, they should be wearing Mickey Mouse T-shirts.

I feel the same way about the pro-gay marriage shirt at Dollywood. What’s the objective of doing this? Getting in someone’s face with an argument is offensive, whatever that argument is. Isn’t the intent of such a T-shirt to get in the face of those who oppose gay marriage? There are places to do that; I don’t think Dollywood is one of them. The Golden Rule is helpful here: would the couple appreciate having to see a patron wearing a T-shirt with the text of the Defense of Marriage Act on it? Presumably not.

When I was a freshman in college, the freshman dining hall had a strict dress code—jackets and ties, or no meal. Being in the Age of Rebellion, several students set out to destroy the long-standing policy. They would show up with ties, but no shirts, or a jacket and tie, but no pants. Or they would take off their ties as soon as they sat down to eat. They would have jackets and ties, but also have stuffed animals or balloons tied to their heads, or they would arrive in jackets, ties, neatly pressed shirts, slacks—and wearing skis or flippers instead of shoes. The college spent so much time parsing policies and arguing over what was and wasn’t “appropriate” that it eventually gave up: a dress code that had been accepted for a few hundred years was gone forever, because if the students were determined to violate it, so no rule would work.

The funny thing is, most of us kind of missed the dress code. The meals were more civil and dignified when there was a conscious effort to look good and to respect the surroundings. Meals seemed special when we had to take them more seriously; now everyone came to meals dressed as slobs.

Decorum in public places is like that. If people won’t respect each other and are determined to test the boundaries of acceptable deportment, there is little Dollywood or anyone else can do about it, and it is futile to try. Base enforcement on what individuals say is offensive, and the grievance bullies will take over. Make rules, and the lawyers will find ways to get around them. Pick and choose, and bias and unfairness is inevitable.

Dollywood’s intentions were good, but its methods of pursuing them were wrong, because there are no methods that are both fair and effective. As for the couple, I can’t say that it was wrong to use a visit to Dollywood to advocate same-sex marriage.

But I can’t say it’s right, either. Ethics conflicts are like that.

17 thoughts on “The Provocative T-Shirt Problem”