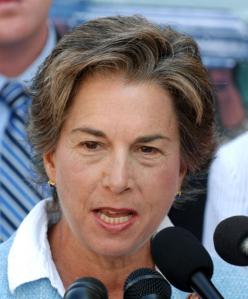 As proof of the degree that Tea Party anti-tax mania has unhinged the brains of conservatives generally, especially hyper-ventillating  pundits, consider last week’s controversy over poor Rep. Jan Schakowsky (D-Ill), who told a morning talk show, Wade & Roma on WLS-AM in Chicago, that citizens were obligated to pay a portion of what they earned to the government, and as a result became the poster girl for What’s Wrong With America, or at least the Democratic Party.

To read and listen to the abuse and ridicule heaped on Schakowsky, one would have thought that she was Lenin-in-a-bra, advocating government confiscation of the wealth stolen from the workers—in fact, that’s what I did thought when I heard some of the furious rants about her comments from the conservative talk show circuit. Then I listened to the clip. Do you know the horrible, foolish thing she said? You’ll be shocked. Here’s the key exchange:

Schakowsky : I’ll put it this way, you don’t deserve to keep all of it. It’s not a question of deserving, because what government is, is those things that we decide to do together. I think you need to pay your fair share for things we’ve decided are our national priorities.

Host: So Jan Schakowsky, out of every dollar that I earn, how much do you think I deserve to keep?

Schakowsky: What is really your question here? Do you think you should not contribute to firefighters?

Host: No, no, it’s a very simple question. Out of every dollar I earn, how much do you, Jan Schakowsky, think I deserve to keep?

Schakowsky: It’s not a question of deserving. What government is, is those things we decide to do together.

The Right’s reaction to her innocuous statement of the obvious is a good example of how a legitimate point gets distorted and hardened into absurd ideology. The legitimate conservative point is that income is not the government’s money that it may allow or not allow individuals and corporations to use. It is an important clarification to combat he rhetoric of the Left that reducing tax rates for any group, including the rich, is “giving” money to them, a misleading and offensive concept designed to support the view that government decides, in its infinite wisdom, which and how much of the benefits of liberty an individual may have. But the Right’s valid point has been expanded by the its more rabid (and less fair) into an absolute principle that the government has no right to require citizens to pay anything at all. That is nonsense. It is also irresponsible, unworkable and wrong.

Admittedly, Rep. Schakowsky’s ability to express herself leaves much to be desired; if there were not so many even less articulate and more intellectually muddled members of Congress, she could be the poster girl for What’s Wrong With America—too many mediocre leaders. But what she was saying, or trying to, is correct. The duty of citizenship includes the obligation to pay for the services provided and actions taken by the government, including services and actions that the citizen individually may not agree with. “Deserves” was a clumsy word, but based on the interview, let’s be fair: Schakowsky doesn’t have a large vocabulary to choose from.

The counter argument is articulated with brio by J. D. Dyer on the website Hot Air. It is pure abstract fantasy, and therefore useless: “I may decide to use some of [my money] for the purposes I assign to government.” Sure. Ours is a volunteer finance system, and each individual can give or not give to finance the government—which builds and maintains our roads, runs our schools, checks our food, guides our air traffic, stops us from being robbed and killed, guards against foreign invaders and terrorists, etc, etc—according to whether any one of us feels like it or not, and approves of the policies (or uses the services) involved. That’s going to work well, J.D. Let’s reduce society to millions of independent units who can opt out of cooperative, majority-rules government whenever one of them would rather buy a snowmobile than pay for Social Security. Rep. Schakowsky can’t talk very well, but at least her theory is sound. Yours is ridiculous.
“America was founded on the principle that individual rights precede and constrain the state.  As far as government is properly concerned, we all deserve to keep 100% of our money.  The question of what we decide to do with it, and how the functions of government figure into that, is a separate and subordinate topic,” he writes. This is pure sophistry. If we live in the country, we are obligated to share in the costs of having a country. Does someone who lives in my house “deserve” to keep 100% of his earnings, even though he is taking advantage of my property, comfort, security, and utilities, not to mention the damn satellite TV that I pay a fortune for to watch the Red Sox even though it goes out every time there’s a wayward cloud or a still breeze?

And that’s all Rep. Schakowsky was saying. Send her a Thesaurus, but stop picking on her.

5 thoughts on “Rep. Schakowsky Was Right…Inarticulate, But Right”