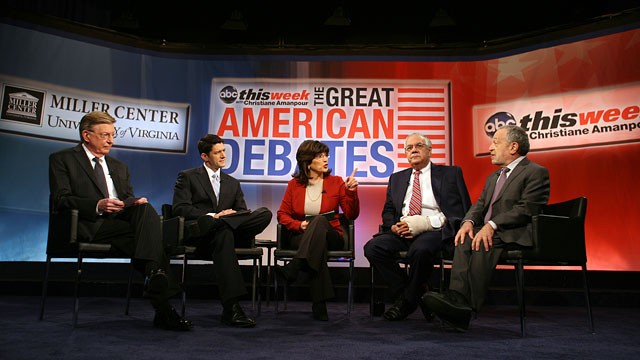 As balm for Christiane Amanpour’s bruises from being kicked off her ABC Sunday show back to CNN, the network honchos let her try a different format this weekend (since nobody was watching anyway.) Styled “the Great Debate,” it pitted conservatives Paul Ryan, the GOP House intellectual, and columnist George Will against soon-to-be-retired Democratic Congressman Barney Frank and Clinton’s former Labor Secretary and perpetual Munchkin Robert Reich for the full hour, exchanging familiar talking points on the usual suspect national issues. The debate wasn’t so great, for several reasons, prime among them being the natural motor-mouth tendencies of Reich and Frank, who, I would guess, took up approximately twice the air time as the conservative pair. The teams were similarly unbalanced in cheer, with Reich as perky as his Lollipop Guild training would suggest, and Frank full of his trademark wisecracks, while Will was dour as ever (when faced with liberal cant, the columnist always looks like my high school Latin teacher did when I was botching the day’s translation) and Ryan radiated the charisma of a certified public accountant.

The most interesting exchange was when George Will derided proposed federal regulations against “distracted driving” as the latest installment of the nanny state encroachment on personal rights, saying that individual freedom should trump the government’s concern for public safety except in the most extreme circumstances. One of the good uses of absolutist reasoning is that it raises a very high bar before breaching a valid principle can even be considered, since it has to be considered as an exception if it is to be contemplated at all. Barring unsafe conduct that increases the likelihood of automobile accidents, however, is not the place for absolutism, but for utilitarianism—rational balancing.

Will’s argument makes some sense when applied to mandatory seat belt use: not using a seat belt is a personal risk that does not endanger others (at least directly: more on that shortly.) Talking on a cell phone, texting, reading a Facebook update and other forms of distracted driving do endanger others, and making laws that punish fools who think keeping up with the Kardashians is worth risking the lives of my family is an easy call, ethically speaking. So a driver has to pull off the road and park before answering a call or reading a text…big deal. George needs to get out more: if he was behind the wheel with any frequency, he would know that the number of inattentive drivers weaving in and out of traffic, shifting speeds and missing lights and signals because of the Blackberry in their hands is frighteningly high.

Ethically, the trade-off is minor inconvenience—-in most cases, minor to the point of irrelevance—versus human lives saved. I have listened to the conservative talk-show chorus mocking the proposed ban, and it is an extraordinary example of placing abstract principle over common sense and reality. Ethics, in the end, are determined by rational conclusions, based on observation, experience and analysis, about what kind of conduct and standards most benefit individuals, society and civilization. Doctrinaire elevations of minor infringements of principle to priority over undeniable risks to human life are not ethical. Ideological purity divorced from reality is no friend of ethics.

Barney Frank’s cause was, predictably, legalizing marijuana, which he analogized to gay marriage. I wouldn’t say his argument was worse than Will’s, but like Will, he Will-fully ignored the harm prohibited individual conduct does to others. Pot use is not like gay marriage. Same-sex marriage harms no one; prohibiting it harms the loving couple that is stigmatized and handicapped by laws that prevent them from enjoying the same legitimacy and respect in their union as traditional spouses. Pot advocates like Frank, and I have been listening to them most of my life, pretend that recreational marijuana use consists of single, unencumbered, financially secure and mature individuals with no obligations and no responsibilities to others sitting in their homes or dorm rooms toking away and being blissfully and harmlessly stupid for an hour or three. If pot use was restricted to this, I would agree with him. But it is not, and cannot be.

In society we are all bound to each other by bonds of mutual dependence and trust. A bus driver who smokes pot is risking the lives of young children. A student who smokes pot is sabotaging his education, and making it likely that you and I will have to pay the costs of his progressively unsuccessful life as a result. A husband who smokes pot and makes mistakes at work is jeopardizing the welfare of his children and family. Every hour stoned on a recreational drug is one less hour spent on productive activity that could benefit one’s dependents, colleagues, community and society. Every dollar spent on getting stoned is one less dollar that could be used to start a business, feed a child, pay a debt, or save. It is purely selfish behavior with real social costs and minimal benefits.

Like getting drunk, using marijuana may be relaxing or fun, but there are many, many ways to have fun and relax in America that don’t undermine the rest of society. Once again, the ethical trade-off is an easy one—a society without people wasting their time and money making themselves periodically slow-witted, inarticulate and stupid is undeniably a better society to live in than one that encourages such conduct, and making the conduct legal does encourage it.

Frank’s sneering mockery of those who, unlike him, think responsibly about the unavoidable and almost entirely negative consequences of permitting another alcohol to take permanent root is society, is even more obnoxious that Will’s airy dismissal of thousands of highway deaths as insignificant when compared to losing the freedom to Google “crash” while you are crashing. Barney likes his weed; it poses no danger to him, he can handle it, and he’s annoyed that he has to break the law to get high. And all the less intelligent, less responsible, younger, vulnerable Americans–and those who support or depend on them— whose lives will be diminished by free access to pot? Barney just doesn’t care, so he talks as if they don’t exist.

Sometimes giving up a small amount or personal freedom to promote a more stable society and to protect fellow citizens is the most ethical course. The fact that neither of the ideological opposites in this Great Debate seemed to understand that is troubling.

I think I’ll smoke a joint to calm myself down, and then chat with my sister about my concerns on my cell while I drive to the supermarket.

175 thoughts on “Distracted Driving, Pot, and “The Great Debate””