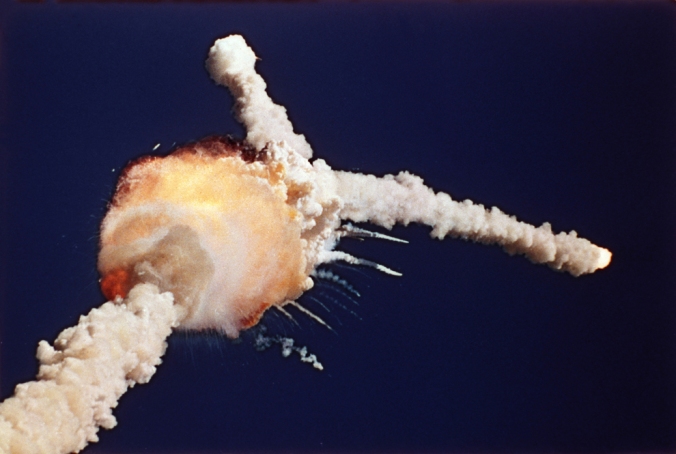 Roger Boisjoly’s death was originally just reported locally when he died in Utah last month at the age of 73. Only now is the media reminding the public of Boisjoly’s life, his tragic role in a national tragedy, and how he tried and failed to avert it.

In 1986, Boisjoly was a booster rocket engineer at Morton Thiokol, the NASA contractor that, infamously, manufactured the faulty O-ring that was installed in the Space Shuttle Challenger, and that caused it to explode. Six months before the Challenger disaster, he wrote a memo to his bosses at Thiokol predicting”a catastrophe of the highest order” involving “loss of human life.” He had identified a flaw in the elastic seals at the joints of the multi-stage booster rockets: they tended to stiffen and unseal in cold weather.  NASA’s shuttle launch schedule included winter lift-offs, and Boisjoly  warned his company that send the Shuttle into space at low temperatures was too risky. On January 27, 1986, the day before the scheduled launch of the Challenger, Boisjoly and his colleague Allan J. McDonald argued for hours with NASA officials to persuade NASA to delay the launch, only to be over-ruled, first by NASA, then by Thiokol, which deferred to its client.

And the next day, on a clear and beautiful morning, the Shuttle’s rocket exploded after take-off, killing the crew of seven and mortally wounding the space program.

Three weeks later, Boisjoly told NPR’s Daniel Zwerdling about his experience in an unrecorded and confidential interview, which is only now being fully revealed to the public. The discovery of his memo briefly brought him notoriety as a whistleblower, though that was not really what Boisjoly was. He was a man trying to do his duty in the teeth of resistance based on politics, bureaucratic tunnel-vision,  arrogance and a flawed decision-making system.  After the disaster, McDonald and Boisjoly were ostracized by their Thiokol colleagues, as both the company and NASA effectively blackballed them in the industry for breaking ranks.

Boisjoly’s anger, stress and guilt—he always felt that he should have been able to stop the launch, though, realistically, he could not—affected his health, leaving him with chronic headaches. He tried to sue Thiokol and NASA without success, and ended his career as a forensic engineer and a lecturer on engineering ethics, the latter role in part as therapy recommended by his doctor as a way to deal with his rage. Boisjoly spoke to engineering schools around the world on the importance of ethical decision-making, trying to do his part to prevent future disasters, having failed to prevent the one that haunted him.

Can we accurately call Roger Boisjoly an Ethics Hero, even though he didn’t stop the launch? I usually don’t like to call people heroes for doing their jobs. If Thiokol and NASA had behaved ethically, competently and rationally, we would not know anything about his memo or him. He did the right things, as his duties demanded. He alerted management to a deadly problem in plenty of time to address it. When they went forward, he argued and protested, until the decision was final. Afterwards, he told the truth to investigators, so the decision-making problems could be addressed. In his world, in that bureaucracy, this—doing his duty, doing the right thing—took courage. He knew, I am certain, that his career would suffer as a result of his actions. Yes, that makes Roger Boisjoly an ethics hero.

Perhaps he could have been a greater one, and that was the tantalizing “what if?” that shadowed the rest of Boisjoly’s life. Should he have threatened to go to the media if the launch wasn’t re-scheduled? Or try to sabotage the launch, like Jimmy Stewart as the metallurgist in “No Highway in the Sky,” disabling a passenger plane on the runway when his calculations showed that the plane’s tail was about to fall off in flight, after everyone dismissed his warnings? Should he have risked being brought down in a hail of bullets on national TV as he physically blocked the launch, like Jack Lemmon’s desperate nuclear power plant manager in “The China Syndrome”?  These acts would have required remarkable courage and extreme certitude, and perhaps only seem reasonable now, after we know what happened. And after we’ve seen the movies.

Roger Boisjoly was a real life ethics hero, the kind we all should and can aspire to be. He did his best, tried to do right, and tried to help others do right. The fact that he failed when it mattered most is moral luck at its cruelest, but it shouldn’t change our assessment of his values, his courage, or his life. Sometimes, like Roger Boisjoly, we can do everything right, and events will still go horribly wrong. Unethical, irresponsible and incompetent people outnumber the ethical among us, and always have.

That’s why we have to keep recruiting.