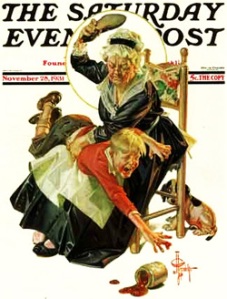 Spare the rod, and avoid a restraining order...

The societal approval pendulum has swung so far away from physically punishing children that a formal spanking risks an accusation of child abuse. The Hawaii Supreme Court, in the case of Hamilton ex rel. Lethem v. Lethem,  in which a retraining order was issued against a father accused of abusing his 15-year-old daughter, pronounced guidelines for determining what constitutes reasonable and moderate corporal punishment of a child by a parent, ruling that such punishment is reasonable (and a Constitutional right ) when..

I would add to the court’s legal standard that punishing a child in anger is always unethical, because it amount to retaliation, vengeance or loss of self-control. Corporal punishment of a child should never be personal, and should arise out of love, not fury. The Hawaii Supreme Court’s standards are consistent with this.

The court directed the lower court to apply its standard to the facts of the case. In that instance, there seems little doubt that the parent was in fact abusive. You can read about the case here.

[Huzzah to the Volokh Conspiracy for the story.]

31 thoughts on “The Ethics of Corporal Punishment For Children”