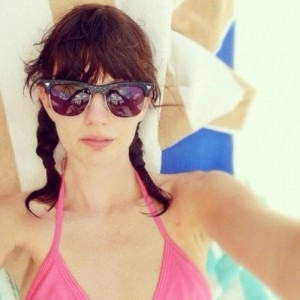 We have covered this territory before: the unethical conduct of the cruel and arrogant conversant or correspondent who publicizes private communication over the internet in order to embarrass someone whose only offense was social awkwardness or a moment of bad judgment, and whose biggest mistake was trusting a heartless jerk.  It is the Golden Rule breach of breaches, and is social misconduct that shows a serious deficit in kindness, fairness and decency.

Model Melissa Stetten, however, takes the cake, except that models aren’t allowed to have cake. Flying in First Class  from New York to Los Angeles, Stetten found herself next to actor Brian Presley, who was apparently rendered weak-kneed and stupid in the proximity of such beauty, plus he was a little drunk. His flirtatious chit-chat was both awkward and  pompous, so Stetten, who, like most models, undoubtedly has the conversational skills of Dorothy Parker, decided to  live-tweet their conversation to her 30,000 followers.

Brian Presley, naturally, was humilated. His wife was probably furious with him. His fans now know him as a dork who trots out the lamest pick-up lines ever devised. He also, apparently, was in the midst of an alcoholic relapse, so naturally Stetten mocked him for that too in her tweets. (Her entire performance is available on the web; I’m not going to circulate it. Unlike the New York Timse, jI don’t believe that just because I have access to information  I should magnify the harm it can do by helping to circulate it.)

Stetten’s justification for this miserable act was that Presley, a married man with a family, was an adulterer, which is utter rot. I think flirting with other women is dangerous if you are a married man (in fact, I know it is), and wives are consistently opposed to ut, but flirting without more is not infidelity, and in this case, there was apparently nothing else. Presley didn’t ask for a phone number or propose a rendezvous. It the model was so offended by the attentions of a married man, she had an ethical and effective response available: tell him to cut out the sweet talk, and leave her alone. Instead she decided to make sport of him. Despicable. (Apparently some even doubt that the encounter took place, meaning that Stetten made it all up; she has a record of telling whoppers. Sending a fake Twitter feed to humiliate Presley—now that would really be despicable.)

Brian Presley, one hopes, at least learned some valuable lessons, the prime one being as old as Athens.

“Beauty is only skin deep.”