Here are the final five ethics movies, making 25 on the Ethics Alarms list so far. Except for the last, they are a sober batch. I think I now understand why they are at the back end of my list of 25; this group is darker than the first 15 and more tinged with defeat than hope. Their ethics lessons, however, remain inspiring, or if not quite that, thought-provoking: 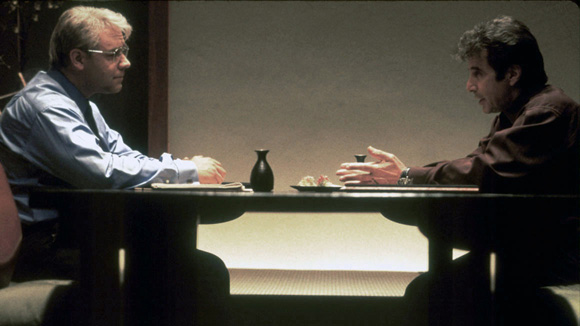 Another true story, one that explores the murky area of whistleblowing and whistleblowers as well as the conflict between the business of journalism and the profession of journalism.

Favorite quote: “You’re in a state of conflict. Here’s how it lays out. If you have vital insider stuff that the American people for their welfare need to know and you feel compelled to disclose it and this violates the agreement – that’s one thing. On the other hand, if you want to honor the agreement, it’s simple. Say nothing. Do nothing. The only guy who can figure this out is you, and that’s you all by yourself.” Lowell Bergman (Al Pacino)

This science fiction film was almost universally panned and misunderstood, in part because its director, Michael Bay, is presumed to be a coarse and trivial film maker. Yet this was a thought-provoking rarity, a Hollywood product that asked tough questions about abortion, if you were not confused, as most critics were, by the use of clones as stand-ins for the unborn.

Favorite quote: “When my father was killed, my brothers and I were branded, so everyone would know we were less than human. I’ve said and done things I’m not proud of, but sooner or later you realize, killing’s a business. So… when did killing become a business for you?” Albert Laurent ( Djimon Housou)

“Quiz Show” is the true story about the quiz show scandals that rocked television in its infancy. Congressional hearings revealed that popular prime time programs like “21”were fixed, and that a young Columbia professor and scholar was one of the champions who had been supplied with the answers in advance. This is an intense and intelligent study in the power of rationalizations.

Favorite quote: “…At first they’d ask me questions they already knew I knew the answers to. We ran through those, and I really didn’t want them to give me the answers, so they gave me the questions and I’d look up the answers on my own, as if that were any different. Well, we ran through those in a couple of weeks and I just didn’t have the time, finally, and it just seemed silly, so…”   Charles Van Doren (Ralph Fiennes)

Like “Quiz Show” a Robert Redford-directed historical drama, “The Conspirator” tells the inspiring story of Frederick Aitkin, who took the hopeless job of defending Mary Surratt in the Lincoln assassination conspiracy trial. (Surratt, who ran the boarding house where the plot to kill the 16th President was hatched, became the first woman to be executed in the United States.) Few films make a clearer argument for lawyers representing unpopular clients and causes. The movie also shows the ethical dilemmas facing government when a crisis shakes the public’s faith in its own security, like 9/11 or the assassination of Abraham Lincoln.

“Cinderella Man” offers a hero who seems too good to be true but who was apparently just about as ethical in real life as he is shown to be in the film. He is James Braddock, a nearly forgotten heavyweight boxing champion in the 1930s (he was ultimately dethroned by the immortal Joe Louis).  Braddock confronts every challenge in his difficult and improbable life with a natural instinct for choosing right over wrong. It is hymn to an ethical life spent in part in a brutal and unethical sport, and the rare breed of champion whose personal values and character not only matched his degree of success, but were responsible for it.

Favorite quote:  “You think you’re telling me something? Like, what, boxing is dangerous, something like that? You don’t think working triple shifts and at night on a scaffold isn’t just as likely to get a man killed? What about all those guys who died last week living in cardboard shacks to save on rent money just to feed their family, ’cause guys like you have not quite figured out a way yet to make money off of watching that guy die? But in my profession – and it is my profession – I’m a little more fortunate.”  Jim Braddock (Russell Crowe)