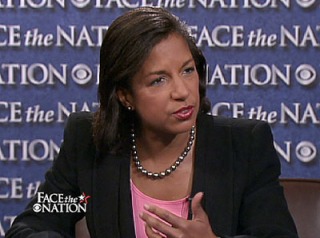 Add to the list of the Top Ten Outrageous Remarks of President Obama this stunner, the low-light of his first full press conference since March.

“If Sen. McCain and Sen. Graham and others want to go after somebody they should go after me. For them to go after the UN ambassador who had nothing to do with Benghazi…to besmirch her reputation is outrageous.”

“Accountability” continues to be an alien ethical concept to the President, and this proves it. U.N. Ambassador Rice went on the Sunday morning TV shows four days after the deadly Benghazi attack and after U.S. intelligence had determined that the attack that killed the American ambassador in Libya was not a spontaneous demonstration sparked by an anti-Islam video, but a planned, organized, terrorist enterprise. She did this while asserting in no uncertain terms that the attack was not what U.S. intelligence had told the State Department and the White House that it was. Rice, in making this mistaken or dishonest case on behalf of the administration, put her name, her status, her credibility and her position behind it. From the moment she became the Administration’s spokesperson on Benghazi, she had something to do with Benghazi. A lot, in fact. She was either lying, telling journalists and the public what she knew was untrue, or irresponsibly passing on information as true, using her credibility and reputation to do so, without adequately determining whether it was in fact true. Either way, her performance that fateful Sunday wounded her credibility and trustworthiness, which is certainly relevant to her fitness to become Secretary of State.. For President Obama to act offended that U.S. Senators like McCain and Graham would threaten to hold a U.S. Ambassador accountable and responsible for her own words is astounding.

Equally astounding is that the assembled “reporters” allowed him to get away with this bluster and diversion, when the obvious and necessary question to be asked on the spot was, “If Susan Rice had nothing to do with Benghazi, why was she touring the news shows telling the public what happened in Benghazi?”

Brava to Kirsten Powers, the Fox News house Democrat (but she’s pretty and blonde, so  naturally she gravitates to Fox), who correctly detected the inherent sexism in Obama’s tactic:

“Obviously caught up in his own silly yarn about meanie Senators and helpless U.N. Ambassadors, the President complained, “When they go after the U.N. ambassador apparently because they think she’s an easy target, then they’ve got a problem with me.”   Imagine George Bush saying that people criticized John Bolton because he was an “easy target.” He wouldn’t.  It’s absurd and chauvinistic for Obama to talk about the woman he thinks should be Secretary of State of the United States as if she needs the big strong man to come to her defense because a couple of Senators are criticizing her.”

Almost as absurd, in fact, as arguing that the U.N. Ambassador isn’t responsible for the words that come out of her own mouth.

Leave a Reply to Arthur in Maine Cancel reply