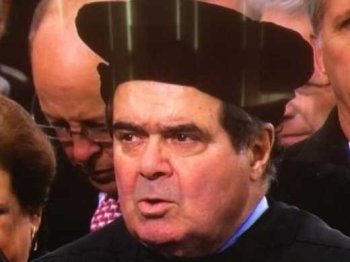 The sun did not shine.

So reporters sat mocking the people that day.

“Why does Justice Scalia have THAT on his head?”

“It’s a beret on steroids!” one journalist claimed.

“It’s so floppy! It’s silly! He should be ashamed!”

But the mockers just showed what they’d proven  before:

They are dim wits, for the hat honored Sir Thomas More.

It is seen on his portrait, sitting right on his hair,

And Scalia had chosen his fashion with care.

And he died fighting tyranny, beheaded one spring.

For Scalia to emulate More on this day

Meant his hat was a message, and not just some beret.

He was telling this President, as More might have said it,

“Keep abusing your powers, and you will regret it.

But  we’ll fight for the Founders, don’t you doubt it one bit!”

It was clever of Nino, and audacious, and tough

To choose this event to declare, “That’s enough!”

And in such a sly way that he certainly knew

Would go over the heads of all but a few.

Still I’m sorry to say, but I’d say to his face,

“Mister Justice, that symbol was just out of place.

The swearing in isn’t the place for defiance;

You were bound to show loyalty, just not compliance.”

So as much as I honor More’s ethics and fight,

For Scalia to wear his hat then…