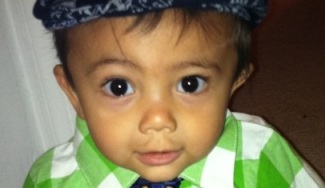 “Why certainly, we’ll be happy to paint a target on your baby’s back, no questions asked—just keep up with the premiums!”

Three insurance companies allowed a Manassas, Virginia father with a suspicious history of violent family deaths to take out life insurance on his 15-month-old son in the astounding amount of more than $500,000. Now the boy, Prince McLeod Ram, is dead, allegedly drowned by the beneficiary of those policies, his dad, Joaquin Rams. He’s under arrest; the companies are unlikely to have to pay out a cent.

I suppose that makes this a good business deal for them.

For the dead kid, not so much.

Despicable, irresponsible, venal and willfully ignorant. Any 12 year old who’s written a book report on a detective novel or seen an old repeat of “Murder, She Wrote” could guess the only plausible reason why any parent would take out such a large life insurance policy on a child. Yet the insurance professionals at MassMutual,Gerber Life Insurance Co. and Globe Life and Accident Insurance Co. never saw anything sinister, suspicious or odd about a father (who, we have learned, previously lost a wife to “suicide” and a girl friend to gunfire) who wants to make sure he becomes rich if, heaven forbid, any thing should happen to his son. Is this conceivable? Or are they just trained not to think about such things as the “evil that lurks in the hearts of men?” Hey, if a someone wants to pay you to hang a bright, red “Kill Me!” sign on his kid, who are you to object, right guys? You assess risk, but only your risk, true? Increasing the risk to a helpless child’s life isn’t really part of the calculation, am I correct?

I know: “Jack, you are condemning a whole industry as unethical because of three bad apples!” No, I’m condemning a whole industry because it didn’t have clear ethics standards that would state that such insurance policies are inherently dangerous unethical, like the Victorian tontines, unless there are unusual circumstance involved—and I can’t think of what those might be. [ All right, if a child is a mega-performing star and the chief family bread-winner, a life insurance policy makes sense.]  An ethical insurance industry would install a rule that says that if you want to insure the life of a child for a large amount, your insurance company will report that policy to law enforcement authorities, and the industry will lobby for a statute that mandates such a process.

An ethical industry wouldn’t tolerate members that are happy to be part of a murder scheme, as long as they make money in the end.