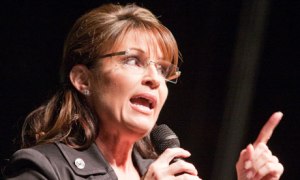 Now if she gave a statistic like this, it would be news.

Rep. Charlie Rangel, I should mention at the outset, should have been sent home by his constituents after demonstrating beyond question that he had reached the point of entitlement and arrogance where he believes principles of ethics no longer apply to him. But the Democratic Party chose to nominate the venerable Harlem icon, and his loyal, if irresponsible, New York district re-elected him, as it has been doing approximately since the dawn of time. Don’t think for a moment that this doesn’t have relevance to Rangel’s recklessness in the case I’m going to discuss. Why should we expect Rangel to be responsible, accurate or prudent in his public statements if nobody will hold him accountable? It’s not as if ethics is going to be a priority for him for its own sake.

Discussing the demise of Diane Feinstein’s assault weapon ban in the U.S. Senate, Rangel blamed the National Rifle Association in a videotaped, semi-incoherent rant that included this:

“I’m ashamed to admit it but its politics and its money. The NRA has taken this position, there is no reason, there is no foundation. There is no hunter that needs automatic military weapons to enjoy the culture of going hunting. But you know it’s really basically the absence of the voices of good people. I cannot believe that politicians are afraid of the NRA. We’re talking about millions of kids dying — being shot down by assault weapons, were talking about handguns easier in the inner cities, to get these guns in the inner cities, than to get computers. This is not just a political issue, it’s a moral issue and so when we condemn the NRA we should not ignore the fact that a lot of people that have taken moral positions have been solid on this big one.”

That’s right: Rep. Rangel said that millions of kids are being shot down by assault weapons. That’s what he said, on camera. Now, the facts in this case are not only easily checked, they are also at variance with reality in the approximate proportion that 2013’s America is not like Oz.

The FBI, which unlike Rangel, does not appear to be entering senility, reports that just 358 people, of all ages, not just “kids,” were killed by “rifles” in 2010, which includes so-called “assault weapons.” The total number of gun-related homicides in 2011 was 8,583.  At this rate, which has in fact going down without the benefit of new legislation, it would take more than a century to reach a million gun fatalities, and since children make up less than a third of the 2011 number, at least three centuries to achieve one million gun-slain “kids.” As for Rangel’s “millions”? Well, he can’t do the math, apparently, but you can.

If Rangel believes this absurd factoid, then he is making public statements about matters on which he is frighteningly ignorant. If he doesn’t believe it and said it anyway, then he is lying and fear-mongering. If he said “millions” when he meant “hundreds,” which is also wrong but at least in the ball park, then he should not be allowed near any budget, ever. If he uttered it by accident, then he cannot be trusted to convey accurate information to his constituents, the American public, or the order taker at Dominoes. There is no excuse for this.

Thus a famous, revered Congressman of long-standing, in the middle of an emotional public policy debate, makes a statement that is, by any measure, one of the most wildly inaccurate and factually untrue assertions a public figure can make. During the last election cycle, an idiot running for the U.S. Senate named Todd Akin made a moronic statement about female bodies magically knowing which fertilized eggs were the result of rape and wisely  vaporizing them. Every news outlet in the country, right and left, trumpeted the statement for weeks, as well they should have—no public official should be that careless, reckless, ignorant or stupid, take your pick. Earlier in the cycle, Michel Bachmann’s illiterate confusion of John Adams and his son was ridiculed far and wide. Sarah Palin’s historical and geographic gaffes regularly made the New York Times and CNN, not just Saturday Night Live.

And Rangel’s idiocy? As I write this, I cannot find a single news source that would not be pigeon-holed as “conservative media” that has reported this story…that finds a cretinous, spectacularly untrue and irresponsible statement by a prominent U.S. Congressman on a current and hotly contested national issue worthy of noting. Go ahead, you defenders of the objective news media whose leftward bias is a myth: explain that for me. Please. Justify it in legitimate journalistic terms, which means that you must believe that a liberal and biased news media isn’t…