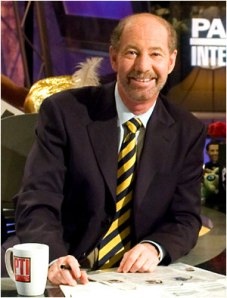 No pardon for you, Tony…

Tony Kornheiser is a sportswriter and humorist as well as a television and radio personality. I’ve been reading, watching and occasionally laughing at him since I moved to D.C. eons ago, when he was a Washington Post columnist. This post has nothing to do with sports, however, though the issue arose in a sports context. It has to do with the depressing fact that Tony’s mode of ethical analysis is still based on consequentialism and an ignorance of moral luck, and that he is, despite being an educated, erudite and clever man, typical of the public in this respect.

It is depressing, and thus I say, “Ugh.”

For the second time in two days,  the ten minutes I had time to watch TV randomly brought me to a discussion of umpire Marty Foster’s botched third strike call to end a close game between the Tampa Bay Rays and the Texas Rangers. Tony was arguing with Michael Wilbon on their hit ESPN show, “Pardon the Interruption.” [ Aside: And why did my channel surfing pause there? Because the project that has eaten my life the last couple weeks requires me to mention, in a speech, the HBO Larry David show “Curb Your Enthusiasm, ” and I keep wanting to say “Pardon the Interruption.” I blew it again last night, so naturally, the first thing I see this morning is the show I’m trying to purge from my brain.] They were debating whether Foster should be disciplined for his bad call, an idiotic issue, since the answer is “Of course not; are you nuts?” Umpires make hundreds of judgment calls every game, and mistakes are inevitable. As I wrote yesterday, Foster’s handling of this botched call was exemplary, because he admitted that he had erred. Punishing him or any umpire who misses a visual call would be unfair and destructive; such punishment could only be valid in the case of actual misconduct or negligence, as in the case of an umpire ignoring or not knowing the rules.

But “Curb Your Enthusiasm”—ARRRGH!!!!—“Pardon the Interruption” is based on stupid arguments, so this was hardly a surprise. Here was Tony’s assessment —this is close to his exact words; I grabbed a pen and wrote it down seconds after he spoke—

“Even if Foster had called the pitch correctly and Zobrist walked, it would only put runners on first and second. And there were two outs in the ninth…it’s not as if Foster took the game away from the Rays. So I don’t think you fine the umpire.”

This is ethics idiocy, as well as baseball ignorance, and just plain ordinary idiocy:

Naturally, Tony’s partner, Wilbon, didn’t counter with any of this, because he’s an Ethics Dunce too. Note also that Kornheiser’s conclusion was correct—-Foster shouldn’t be disciplined—-even though his reasoning to reach that conclusion was ethically and logically flawed.

Smart people in the media who use inept ethics reasoning help make our culture more unethical in tiny but significant ways. They net effect of thousands of little moments like this is to make the public less ethical and dumber. Gee, thanks, Tony!

* I had no place where this fit, so I’ll put it in a footnote. Thirty years ago, it was obvious that Kornheiser is a basketball and football guy who only wrote or talked about baseball when he absolutely had to. He didn’t know the game very well, didn’t watch it often, and wasn’t a fan. As a columnist, that was all right, because Kornheiser usually wrote about the sports he knew and enjoyed. On his ESPN show, however, Kornheiser became obligated to opine on all sports, which means that he was obligated to become competent to do his job. Yet the show has been running for a decade, and he still is a baseball ignoramus. He hasn’t done his homework; he doesn’t care about the sport, so he just fakes it when he has to discuss a baseball issue. It’s lazy and irresponsible, as well as unfair to his viewers. This is why I watch “Curb Your Enthusiasm” instead.