“The idea that allowing two loving, committed people to marry would have a negative impact on anyone else, or on our nation as a whole, has always struck me as absurd.”

—Senate Majority Leader Harry Reid, after calling Wednesday’s Supreme Court ruling striking down the Defense of Marriage Act “a great, historic day for equality in America.” Reid voted for the law when it was overwhelmingly passed by the U.S. Senate, back when treating gays like second-class citizens was popular. 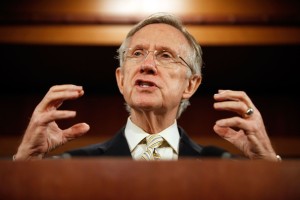 Harry Reid, embracing absurdity when it is politically expedient…

It’s hard to say which of the legislative lions prowling the cloak rooms of Capital Hill are more loathsome—Republican Mich McConnell, Nancy Pelosi, or Harry Reid. It’s easy to decide which is more shamelessly cynical and hypocritical, however. That would be Harry Reid.

If he “always” thought that DOMA was “absurd,” why did he vote for it? Are we to take from this that he not only is willing to vote for absurd measures (he has voted for many), but also votes for measures when he believes they are absurd? Or does he just say whatever he thinks will sound good to the low-information, knee-jerk progressives who have a memory of about two weeks (if that) regarding any issue, and possess the naïve belief, also absurd, that only Republicans lie to them?

Reid’s statement is the epitome of an unethical quote, because there is literally no way to interpret it that doesn’t indict the Senator’s character. If he is telling the truth, then he was willing to impede the civil rights of a core Democratic constituency by helping to pass a law he knew at the time was “absurd.” If he was actually in favor of the bill he voted for, then now he is lying, and also demonstrating that he thinks Americans are box of hammer stupid.

Which is it? Who cares? This is a certifiably awful man, without integrity…the dregs of national politics. And this is the man whom Senate Democrats have allowed, indeed chosen, to lead the party and set the legislative agenda for the nation since 2008.

Again, none of the explanations for this dereliction of duty to the public and the nation are tolerable. Does the party really want to be led by such a shameless hypocrite? Do the party ranks have no one better? Do they subscribe to Harry’s values, which can be summed up as “Say and do anything you can get away with that will help you stay in power”? Are they just dumb? Do they all think we are dumb? Why aren’t they embarrassed?
_______________________________________