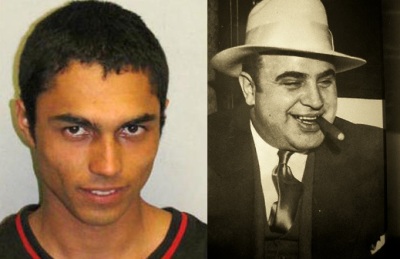 Being the daughter of Kanye West and Kim Kardashian is handicap enough, one would think, without having to go through life branded with the name “North West.” But in the annals of self-indulgent and reckless child-abuse-by-birth-certificate, what the rapper and the whatever-the-hell-she-is inflicted on their love child is small potatoes compared to the cruel and horrible name affixed to this unfortunate:

“Big Island police have charged the man arrested in connection with a carjacking Wednesday night in Hilo. Alkapone Cruz-Balles, 19, who has no permanent address, was charged late Friday afternoon (July 19) with first-degree robbery and unauthorized control of a propelled vehicle…A Hilo man was ready to get into his car at the Target parking lot of on Puainako Avenue when police say Cruz-Balles brandished a weapon and threatened the victim. Police say he then took the keys and took off in the car….”

There’s nothing like pointing your son toward the cell block when he’s barely out of the womb. I don’t know why any parents would name a child “Alkapone,” much less why they would voluntarily adopt the surname “Cruz-Balls,” which sounds like a weapon in a Sci-Fi porno film. I do know that any parent who would do so are a pair of unethical jerks. Presumably they thought the name was funny….how nice: burden your child with the name of an infamous gangster so you can have a few laughs at dinner parties. I don’t believe in name determinism, but someone named “Alkapone” is going to have a hard time entering a lot of fields—accounting, banking, law enforcement, politics (except perhaps in Chicago.) It obviously doesn’t bestow any advantages; Al Capone was a criminal mastermind.

Alkapone is just a punk with a terrible name.