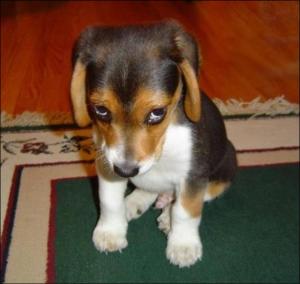 “Why wouldn’t you want to help this adorable little puppy, Senator? What kind of a monster are you”

The government shut-down is hurtling to ethics train wreck status, not because the shut-down itself is unethical, for it is not, nor because the use of the debt limit as a bargaining chip is unethical, for it is a perfect bargaining chip, especially when bargaining with a fiscally irresponsible administration that is happy to spend taxpayer money flagrantly, as if a endlessly growing debt does not pose serious dangers to the nation’s security and prosperity in the not-so-long term. No, the shut-down is a train wreck because everyone connected with it, including pundits and the news media, are behaving badly….and it is getting worse.

Tit-for-tat is beginning to reign supreme, which often happens in a political ETR. Witness what has befallen Harry Reid, who enjoys accusing Republicans of being sub-human curs, as a result of his  reasonable, if carelessly stated, answer to a silly question by a reporter, seeded by the President’s own careless rhetoric in the past.  In a press conference on Wednesday, the Nevada Senator was addressing a series of bills proposed by the House Republicans to fund benign programs everyone  likes rather than funding the whole government.  These bills would fund parks and other D.C. attractions, veterans needs, treating children with cancer and other research projects at the National Institutes of Health, and the National Guard, among other things. It’s a clever political move, because the bills would force a veto from President Obama if they passed through the Senate, which Democrats cannot allow since Obama and Reid have pledged not to negotiate on the budget until the “clean” CR passes. This is the exchange that has Reid defending against bogus accusations of being cruel and heartless:

DANA BASH (CNN): You all talked about children with cancer unable to go to clinical trials. The House is presumably going to pass a bill that funds at least the NIH. Given what you’ve said, will you at least pass that? And if not, aren’t you playing the same political games that Republicans are?

REID: Listen, Sen. Durbin explained that very well, and he did it here, did it on the floor earlier, as did Sen. Schumer. What right did they have to pick and choose what part of government is going to be funded? It’s obvious what’s going on here. You talk about reckless and irresponsible. Wow. What this is all about is Obamacare. They are obsessed. I don’t know what other word I can use. They’re obsessed with this Obamacare thing. It’s working now and it will continue to work and people will love it more than they do now by far. So they have no right to pick and choose.

BASH: But if you can help one child who has cancer, why wouldn’t you do it?

REID: Why would we want to do that? I have 1,100 people at Nellis Air Force base that are sitting home. They have a few problems of their own. This is — to have someone of your intelligence to suggest such a thing maybe means you’re irresponsible and reckless —

Yes, Dana, an irresponsible, willfully dumb, “when did you stop  beating your wife?” question.

You can’t govern or make large scale policy decisions based on a “one child” or “one life” argument: it’s a sentimental recipe for terrible policy. True, President Obama used exactly this argument in the post Sandy Hook gun debate (another ethics train wreck), but we all know that his rhetoric is often irresponsible, manipulative  and unhinged to any serious policy reasoning. Bash’s question can be rephrased to make the government responsible  for every instance of pain and want in the entire nation, which, given the pathetically naive progressive orientation of much of the media, she probably thinks is appropriate

If Reid had the wit and vocabulary that the leader of the Senate should have, he would have answered, “That’s an unfair question, Dana. You can’t govern that way. The Republicans are refusing to fund the government unless only the programs they support are funded, even though they are in the minority. If we allowed them to pass a bill that would fund one thing that they knew the public approves of, then they would pass one such bill after after another, with you and your colleagues asking, “Why wouldn’t you want school children to be able to see the Star Spangled Banner? Why wouldn’t you want research on preventing Alyzheimer’s?” until at last, the irresponsible Republican-run House could say, “Great! We’re done! No more funding for anything else, and by the way, Obamacare is dead.” We’re not just responsible for “one child who has cancer,” we’re responsible for the whole nation that child will grow up in. Of course I care about that child; we all do. But one child with cancer can’t be the focus of a confrontation that affects the lives and fates of millions.”

What Reid actually said compressed this into a statement that roughly meant, “You’re an idiot.” He was right, but because of his clumsy wording, critics who know better but who are even more revolted by Harry Reid’s prominence on the national scene than I am pounced, like Glenn Reynolds and James Taranto. This slur on Reid was echoed by conservative radio hosts, Buzz Feed, Breitbart, Fox News and other critics who too often knowingly take comments out of context to lay “gotchas!” on their political foes.

Now, in context, there was plenty to criticize in the exchange, like the fact that CNN employs reporters who would ask a question like that and think it’s a valid question. The truly outrageous thing Reid said was this: “What right did they have to pick and choose what part of government is going to be funded?” If Bash had a competent grade school education, she could have replied, “I believe that right is called the Power of the Purse, Senator, and it’s in the Constitution.” She was too worried about that one hypothetical child, however, to do her job. Harry, quite properly, understood that his job requires him not to warp policy for one child, and answered the best he could*…and he’s being attacked for that.

* It’s tangential to the post, but really: there’s no excuse for Reid being as inept at public speaking as he is. My old friend Arch Lustberg, the pre-eminent speaker coach in the country, died this year, but Arch, right up to his dying day, could improve a speaking maladroit like Reid (or George W. Bush, or Mitch McConnell, or Nancy Pelosi, or John McCain) materially in a couple of hours. Communication is a core skill of leadership, and it is teachable. For so many national leaders to allow their effectiveness to be handicapped by poor presentation skills when they can be dramatically improved in virtually every speaker, if he or she is willing to expend some effort, is nothing less than laziness and arrogance on the part of those fumble-tongued leaders. It is negligent incompetence, and I am sick of it.

26 thoughts on “How Do You Know The Shut-Down Is An Ethics Train Wreck? When I Have To Defend Harry Reid…”