Update (12/3): This incident has been revealed as a hoax.

Yes, this is stupid, but it is the day after Thanksgiving, I’m still hung over from l-tryptophan, and there are ethics lessons to be learned everywhere, even in disputes between crude TV producers and hysterics.

You can read the details of this story here and the live tweets it generated here—Gale, a reality TV producer, gave a blow-by-blow description over Twitter. 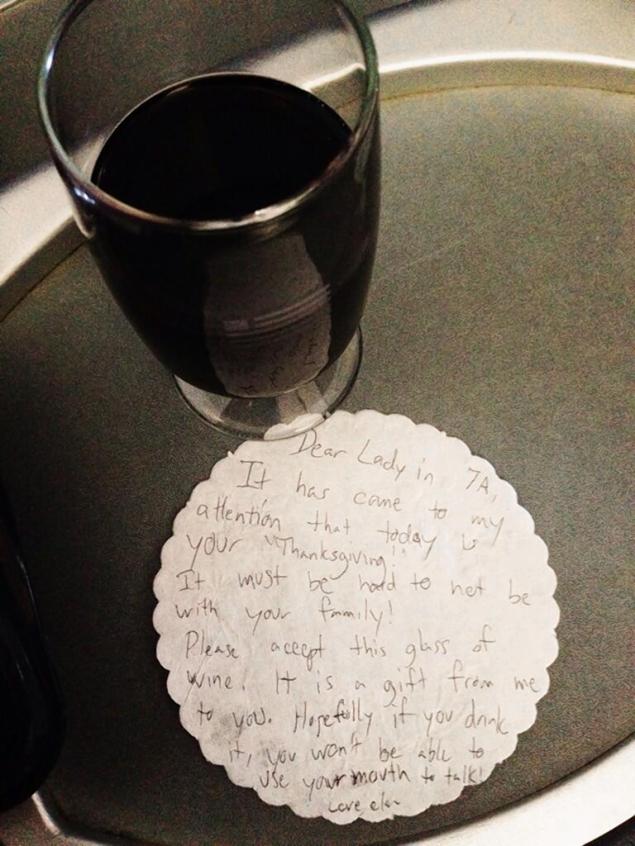 The woman was not amused, and sent him this in return… 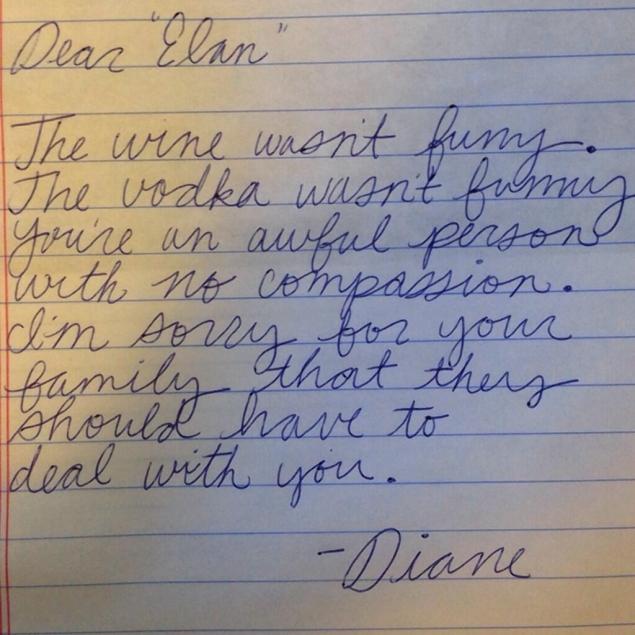 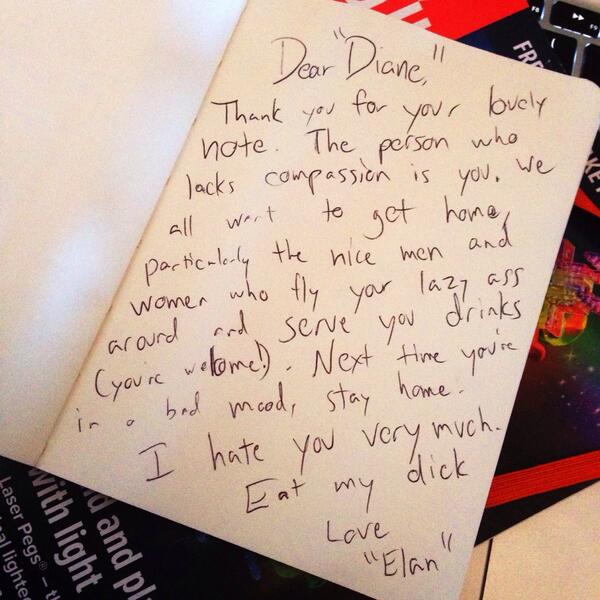 ….to which she retorted… 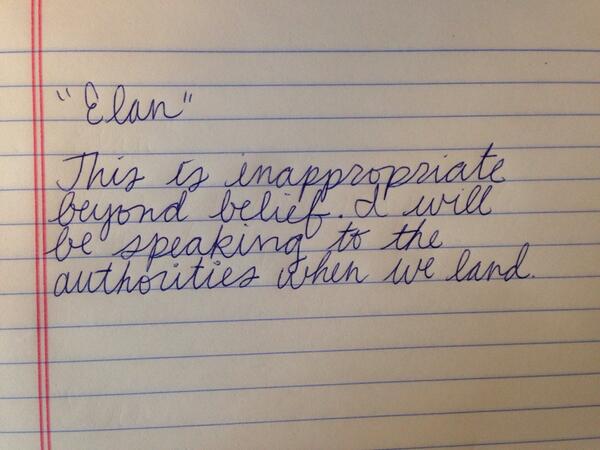 “Dear Diane. When you speak to the authorities, please make sure they arrest you for cannibalism because you just ate my dick! Love Elan.”

After the plane landed, Diane walked up and slapped Gale across his face.

She was immediately detained by a gate agent, who asked Gale if he wanted to press charges. He declined, only saying that he was happy that she had missed her connecting flight to Sacramento. His final message was:

“Diane, allow me to introduce myself. I am TheYearOfElan. Look me up online. read every tweet. Read every response. And maybe next time you’ll be nice to people who are just trying to help. PS Eat my dick. Love Elan.”

The ethics scorecard:
1. The easy one: Diane’s behavior on the plane.
Verdict: Irresponsible, obnoxious, unfair and disrespectful to her fellow passengers. It’s Thanksgiving: everyone is trying to get home, and even if they aren’t, everyone, on any plane, is inconvenienced when it is delayed. Shouting at attendants who have no control over it is inexcusable.
2. Gale’s gift of the wine.
Verdict: By itself, this would have been a responsible, kind, possibly calming gesture. Unfortunately, it was accompanied by..
3. The initial note.
Verdict: Up until the last line, the note is fair and responsible. The woman deserves to be shamed, and Gale is being socially responsible for taking the initiative of letting her know that her conduct is unacceptable. The last line, however, undoes any good it might have accomplished. It’s a gratuitous insult, though one that is deserved in her case. Now the note is just payback, and risks escalating a bad situation.
4. Diane’s return note.
Verdict:  Tit for tat: retribution, not ethics. Disrespectful and unfair. The proper response was “Thank you for the wine.” However, Diane had already proved that rational conduct was not her forte at the moment. Thus her response, completely predictable, was an insult in response to his rebuke. Her call for “compassion” is funny, as she is the one notably devoid of empathy: everyone, including Gale, is being delayed in their Thanksgiving plans, but to her, only her inconvenience matters. Gale hasn’t shown that he’s a horrible person, she has.
5.  Gale’s “Eat my dick” note.
Verdict: NOW we know he’s a horrible person, or at least one of the increasingly common socially-challenged among us who can’t deal with any conflict without resorting to obscene, uncivil language that accomplishes nothing other than bringing the entire episode into the gutter. Call it “Baldwinning.” This, however, is worse than just uncivil and misogynist, it’s wildly irresponsible. The woman is quite possibly unhinged, Gale is in a packed airplane, and he is intentionally goading her. His smug derision could easily have triggered an incident which would have forced an emergency landing that would have wrecked everyone’s Thanksgiving, all for his amusement. Making bad situations worse is unethical.
6. Diane’s return note.
Verdict: Ethical. Gale’s vulgarity was inappropriate, and crosses the line into harassment. The airline (United) should ban him.
7. Gale’s reply
Verdict: See # 5. He isn’t even being clever.
8. The slap.
Verdict: Unethical, of course. At least she waited until the plane landed, no thanks to Gale.
9. Gale’s response
Verdict: Mixed. Not pressing charges was kind and fair: he knew he provoked her. Expressing pleasure at her missing her flight is mean-spirited, as taking satisfaction in the misfortunes of others always is. Wanting someone to be unhappy just so you know they are miserable is an unethical instinct, the opposite of kindness and compassion. Neither of these two combatants have any compassion, apparently.
10. Gale’s final note.

Verdict: Yechh. Pompous, immodest, nasty and more pointless incivility and vulgarity. Ooooo, he’s a reality show producer! THAT should put Diane in her place!
I don’t want to be in a plane with either of these people.
____________________________
Pointer: Fattymoon
Sources: Daily News, Storify, Gossip Cop

39 thoughts on “Ethics Verdicts On The Elan Gale vs. Crazy Woman In Seat 7A Air Battle”