Today, while listening to the furious efforts of such liberal talking heads as E.J. Dionne (NBC’s Meet the Press), Donna Brazile (ABC’s Sunday Morning With George) and Juan Williams (Fox News Sunday) to explain why the Affordable Care Act disaster is not really a disaster and why it should be full steam ahead even as the legislation is unraveling before our eyes, my mind kept jerking back to two disparate sources. One was Barbara Tuchman’s “The March of Folly,” the celebrated historian’s 1985 examination of how governments persist in doomed policies long after it is obvious to all, including them, that the effort is not only futile but disastrous. The other was “Peanuts:” 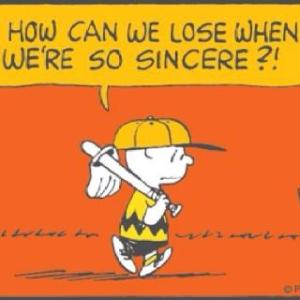 For this is what the bitter-enders regarding the Affordable Care Act have become. Because the absurdly flawed and over-reaching legislation was well-intentioned, and because it was sincerely designed to help people who need and deserve help, and because the hearts of those who rammed it through the process, ignoring warnings, systemic checks and balances, prudence and common sense, were pure, the law just has to work. Former White House spokesperson Robert Gibbs literally said this to David Gregory on “Meet the Press” this morning. There’s just no choice, he said. The administration just has to make it work, that’s all. Anyone who has read Tuchman, or who has been alive longer than Justin Bieber, should get chills to hear sentiments like that.

“The March of Folly” was a cold-eyed retrospective of  how supposedly brilliant people in power can follow through on destructive and objectively stupid policies;how a mission, ordered by a trusted leader, travels the arc from aspiration to compulsion to obsession, and how the public, paralyzed by deference to authority, inertia and restraint, accepts flawed premises long after the damage they are doing and will continue to do are obvious and undeniable. Tuchman calls this lethal tendency of policymakers  a “process of self-hypnosis.” She concentrates on its long and bloody history using examples spanning the Trojan War,  through the British handling of the American rebellion and the Vietnam War. In another publication, she applied similar analysis to the infamous Charge of the Light Brigade. This is what is going on with the Affordable Care Act, and I doubt whether anyone with the necessary influence will stop it until it becomes a chapter in another historian’s sequel to Tuchman’s classic.

To anyone with a modicum of objectivity, the prospects for the AFA are worse than even its worst doomsayers predicted. Incredibly, the Administration is making a dizzying number of changes to the law as it rolls out, the equivalent of trying to make major repairs on a jetcraft full of passengers in flight, because it would be humiliating to admit that the flight took off with defective equipment. While rushing to try to forestall the disastrous results of some aspects of the law, the Administration is denying others, like alarming evidence that that the Healthcare.gov website is not secure and that the Obamacare “navigators” are wretchedly vetted and trained. Meanwhile, the cautionary proposition that a 2000 page, hopelessly complex law that nobody read or could explain sufficiently, aimed at reforming a sixth of the nation’s economy, could not possibly be implemented by the current dysfunctional government bureaucracy without a wave of crippling unanticipated consequences looks more prescient daily.

The hardest thing to do, in management and leadership, as in all aspects of life, is admitting you were wrong, that you wouldn’t listen to those who warned you, and made a terrible, expensive, embarrassing mistake that if not addressed quickly and well, will lead to disastrous results. Even the greatest of leaders have had a difficult time embracing this courageous and necessary act, leading to death, tragedy and destruction across the pages of history. Yet leaders have an ethical obligation to do it. It can be, and often is, the most important part of their duties. Yes, it is humiliating, and yes, it undermines trust, and yes, critics will cheer, and mock, and use this fully ethical act as a weapon against the leader with the integrity to do it. Nonetheless, it is part of the job, an ethical obligation, and essential. As a people and a species we admire perseverance and fortitude, the ability to refuse to accept defeat and press on to victory. For that quality to be virtuous rather than irresponsible, however, requires the willingness to accept and objectively analyze reality. In the absence of that, we don’t get the unexpected rally from certain defeat to shocking victory. We get the Charge of the Light Brigade—bravery, stubbornness and stupidity combined in a recipe for disaster.

28 thoughts on “Obamacare, “The March Of Folly,” And The Ethical Obligation To Accept Unpleasant Facts”