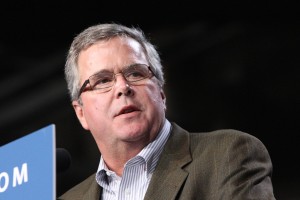 The statement by Jeb Bush has its sunny side, I suppose: with any luck, it should ensure that we don’t have a Bush-Clinton contest in 2016. Maybe that was Jeb’s intent. Otherwise, his comments are irresponsible attacks on the rule of law, common sense, fairness and national sovereignty.

“There are means by which we can control our border better than we have. And there should be penalties for breaking the law.But the way I look at this — and I’m going to say this, and it’ll be on tape and so be it. The way I look at this is someone who comes to our country because they couldn’t come legally, they come to our country because their families — the dad who loved their children — was worried that their children didn’t have food on the table. And they wanted to make sure their family was intact, and they crossed the border because they had no other means to work to be able to provide for their family. Yes, they broke the law, but it’s not a felony. It’s an act of love. It’s an act of commitment to your family. I honestly think that that is a different kind of crime that there should be a price paid, but it shouldn’t rile people up that people are actually coming to this country to provide for their families.”

21 thoughts on “Unethical Quote of the Month: Jeb Bush”