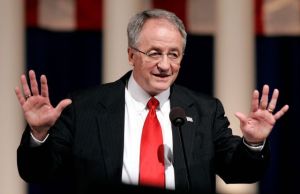 No relation, I swear…

I was tempted to headline this “Unethical Marshall of the Month.” No, there is no relationship that I know of, but on the off chance that I share a gene or two with Delegate Marshall, I am happier than ever that my son is adopted.

Marshall is running for the open Congressional seat in the Virginia District next to mine. To say that he is an embarrassment is an insult to embarrassments. Among his statements, which, he is clear about pointing out, are not gaffes, but his sincerely held opinions:

He isn’t apologizing for any of these statements, mind you, nor any other nonsense he will doubtlessly spout in the future. “I don’t care. I mean, if I say something in public, I say it in public,” he has told the press. Translation: “Yes, I’m an idiot, and damn proud of it.”

The damage done to the state, the nation, political discourse, the Republican Party, conservatism and the health of democracy and representative government by having an unapologetic fool like Mr. Marshall engaged in public service and electoral politics is incalculable. Because he is the living, breathing embodiment of the  most grotesque and hateful  characterizations of conservative politicians that a only a mind-meld of Bill Maher, Martin Bashir and Debbie Wasserman Schultz could conceive, and only then after too many boilermakers, Marshall gives plausible credibility to outrageous stereotypes employed to marginalize legitimate public servants. Yet sufficient numbers of Virginians vote for him to keep him involved in government. When pundits wonder why Virginia is turning from Red to Blue, they need look no further than the continued existence of Bob Marshall, and the blame falls squarely on the irresponsible Virginians that either support or tolerate him.

Is there a Democratic equivalent of Marshall and wackos like him on the opposite end of the political spectrum?  Who would it be, and what expressed beliefs could strike the same chords of universal revulsion in citizens of normal temperment and intelligence regardless of  partisan affiliation? The candidate would have to be something like an advocate for post-birth euthanasia as an extension of abortion rights, perhaps argue for the banning of opposite sex marriage as inherently hostile to the self-esteem of gays, and fervently believe the Antonin Scalia was the false identity of an undead Chief Justice Taney.  Whatever the relative virtues of the Right and the Left, I am pretty sure that the Right has the clear edge in virulent wackos.

ADDENDUM: Meanwhile, Slate suggests that I am merely the tool of a biased liberal media, which buries the stories of embarrassing local Democrats. My response: that’s a separate issue. Any party that has officeholders like Marshall deserves to be embarrassed, and so does he.