“As the news media struggles to expose government secrets and the government struggles to keep them secret, there is no invisible hand to assure that the right balance is struck. So what do we do about leaks of government information? Lock up the perpetrators or give them the Pulitzer Prize? (The Pulitzer people chose the second option.) This is not a straightforward or easy question. But I can’t see how we can have a policy that authorizes newspapers and reporters to chase down and publish any national security leaks they can find. This isn’t Easter and these are not eggs.” 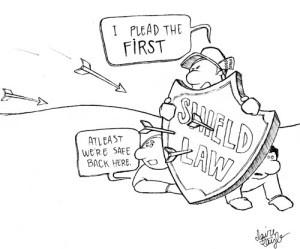 This is the heroic image the press has of itself, as it protects useful criminals and traitors. Unfortunately, it’s a self-serving fantasy.

I lost much of my respect for Kinsley (full disclosure: we’re college classmates; he’s a celebrity journalist, I’m not) when he was shouting liberal talking points at Robert Novak every week on “Crossfire.” I knew Mike was more nuanced than that, and later he admitted as much in various essays: it was all for show. He later admitted that he sometimes endorsed books without reading them completely, and began writing these odd op-eds that appeared to mock the very position he seemed to be taking. Kinsley is suffering from Parkinson’s Disease*, and perhaps that’s a factor in his self-conscious sense of remove from his own writings, but the impression he has given for decades now is of a detached intellectual who looks down his nose at the very profession that feeds him, and who finds it amusing that the rubes still hang on his words, when he doesn’t give them much thought himself.

This quote from his review of Greenwald’s book (hmmm…did Kinsley actually read this one?) fits the bill. It is sloppy, but sufficiently specific to be unethical. He is essentially suggesting censorship of the press, which is an irresponsible position. The publishing of leaks should not be infringed. Chasing them down, however, is another matter. Current laws, if Democrats would leave them alone, are currently sufficient to discourage criminal acquisition of national security documents: just throw journalists who won’t reveal their criminal—that’s what they are you know, like Snowden—sources in jail until they crack, rot, or both, for obstructing justice When journalists actively aid and abet the theft of documents and data, like Greenwald did, before they are acquired and published, prosecute them too, along with their souces. Publishing such documents or using them for investigations are legitimate and First Amendment-protected activities, but nothing in the Constitution protects the leakers, traitors and thieves, or journalists who conspire to help them break the law—which is the stealing, not the publishing.

I have called what the press does with stolen material “information laundering.” That function, unfortunately, is too important to the role of the press in our democracy to regulate or constrain it, no matter how often it is abused. Still,  this should not make those who aren’t journalists immune from prosecution, or journalists who cross the line that divides reporting the news from making it.

* This is a correction; the original post said MS. I apologize for the error; I shouldn’t have relied on memory.

14 thoughts on “Ethics Quote Of The Week: Michael Kinsley”