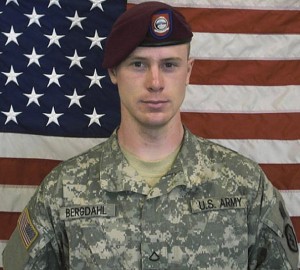 The trade: American security for Obama’s “base.” Like it?

In its lead story today, the Washington Post noted that criticism was “coming from Republicans and the military” in the aftermath of the release of Sgt. Bowe Bergdahl, an American prisoner of war held by the Taliban, in exchange for five Afghan Taliban detainees, also known as “terrorists.” The question should be why criticism isn’t coming from everyone.

Boatloads of ink will be spilled on this topic in the next few weeks, but the fact, as I see them, are not that complicated:

1. Bergdahl deserted his unit and betrayed his duty to his country by walking off the base in Afghanistan, apparently because he was tired of fighting.

2. He was captured by the Taliban, the U.S. enemy, and has been held for the past five years.

3. The U.S. government traded five potentially deadly terrorists back to its enemy to free Bergdahl, who, presumably, will now be tried as a deserter. The army once shot deserters.

4. This required negotiating with terrorists, though expect that Obama administration to go all Clinton on us, and dispute whether the Taliban is really the same as terrorists. Either way, it creates a precedent that endangers Americans, even those who do not abandon their country in combat.

5. The Government and the President did this while violating a law that required the Secretary of Defense to notify Congress before any such prisoner exchange.

And the capper is this: it was all political. In the midst of a Veterans Administration crisis so dire and embarrassing that the President is forced to actually fire one of the many rank incompetents he employs, an action he habitually refuses to take, and suddenly we are fed video of joyful family members exulting that their soldier-boy son has been freed from enemy clutches. Anyone who doesn’t think this was driven by politics is a fool. Besides the implications of the timing, we know everything the Obama administration does is driven by politics.

Oh, naturally this is designed for the Democratic “base.” Everything is for the “base” these days. You know, those progressives who hate war in all cases, who, like Obama, will roll over and play dead if it will avoid having to put boots on the ground. To those deluded and historically ignorant voters, President Bush never should have attacked Afghanistan—after all, all the government of that nation did was enable an unprovoked attack on U.S. soil that killed 3000 civilians. Bergdahl is a hero! Anyone who refuses to fight is a hero! Who cares about s0-called terrorists? Michael Moore is right—more people are killed by auto accidents in a week than were killed on 9/11/2001! Gitmo should be closed anyway! So what if Obama ignored the law and by-passed Congress? Congress is run by stupid, evil Republicans.

Yes, our nation is being led by people whose goal is to appease and please citizens who think like that.

In another Post piece, Fred Hiatt, the lone sensible member, apparently, of the Post’s editorial board, writes about the President’s “values-free foreign policy,” and he was even talking about this foolish, incompetent, dangerous, illegal exchange.

Our nation, our security, our future, safety and welfare is in the hands of untrustworthy, arrogant, incompetents, with the President the most dangerous and inept of them all. That is now a fact.

I wonder when those other than “Republicans and the military” will be willing to acknowledge it. If they care about being responsible citizens, and want to avoid entrusting our nation in the hands of political hacks and amateurs again, they had better.

104 thoughts on “After The Latest Obama Botch, A Responsibility Check For Democrats, The News Media And The Public: Will They Face The Facts?”