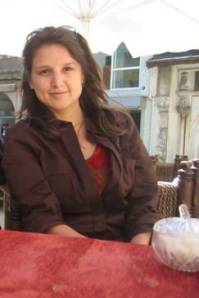 Zeynep Tufekci: so thoughtful, so gentle, so concerned, so dangerous, so terribly, terribly WRONG.

Zeynep Tufekci is a fellow at the Center for Information Technology Policy at Princeton University, an assistant professor at the School of Information and Department of Sociology at the University of North Carolina, and a faculty associate at the Harvard Berkman Center for Internet and Society. She wants  journalists to censor the news and information they publish for our own good, to protect us from mad killers like Elliot Rodger. Because she has surfaced again, as before, to spread her “solution” to mass killings, this well-meaning, sensitive, smug and utterly deluded academic is once again getting respectful quotes, interviews and nods of approval from the likes of The Atlantic, Vox and National Public Radio. Since the hysterics can’t seem to take down the Second Amendment, now they want to use the latest mass shooting (it was a stabbing too) to wound the principles underlying First.

I have been waiting for someone with more influence than me to point out how dangerous and wrong-headed her “solutions” are. So far, nothing. I guess I have to do it myself.

Tufekci laid out her plan in detail two years ago, and it is being resurrected now. In an article for the Atlantic, she opined that the media is complicit in mass murders like the Santa Barbara shooting, because such deranged killers are primarily seeking fame and publicity as they exit this cruel world in blood and bullets. For the sake of time and argument, let us accept her dubious premise that this is indeed the driving motive behind these incidents. (I am sure that this is the motive in some such cases; it is certainly not the motive in all of them, as with the University of Texas tower shooter Charles Whitman.)

Here were her five recommendations:

2. If and when social media accounts of the killers are located, law enforcement should work with the platforms to immediately pull them. Yes, there will be screenshots, and again, I am not proposing that such information can be entirely shut out. But by making it harder to find, we can dampen the impact of the spectacle.

3. The name of the killer should not be revealed immediately. If possible, law enforcement and media sources should agree to withhold it for weeks. The identity can be released later during trial (if there is one) or during the release of the investigative report. Once again, merely delaying the release of information may greatly reduce the spectacle effect. The name may “leak,” but that is very different from the full blast of attention that currently surrounds the perpetrators immediately after each incident. Similarly, the killer should not be profiled extensively, at least not at first. There should not be an intense search for clues or reasoning beyond “troubled person commits unspeakable act; wish he had gotten help earlier,” in as flat a reporting style as possible. We know that the killers tend to be young men, and they tend to have mental health issues. We do not need to know which exact video games they played, what they wore, or what their favorite bands were.

4. The intense push to interview survivors and loved ones in their most vulnerable moments should be stopped. This, too, may help reduce the sense of spectacle and trauma.

Yesterday, Tufekci was interviewed on NPR’s “All Things Considered.” (I have yet to find a transcript.) Reading these points back to her, the interviewer kept asking the same thing: doesn’t the public have a legitimate interest in knowing these things—the name of a criminal mass killer, his method, his background, what he thought, what he was like, and what the survivors and family members of victims felt and experienced? Her answer was always the same, in essence. ‘We don’t need to know all of that. We get plenty of information, We can do without all of the extra information if it results in less gratification of the killer’s mad needs, to be infamous.”

And the simple, ethical rebuttal to her proposal is the answer to these questions:

Who is Zeynep Tufekci to determine nas pass judgment on what I want to know, need to know, have a right to know? What have journalists,  editors and scholars done to demonstrate their superior wisdom that justifies their  controlling what I should know about my world, nation and community? Why should I be kept in ignorance of anything because mentally ill individuals will use the withedl information wrongly?

Nobody…nothing…and I shouldn’t. Those are the answer to those questions, and why her proposal is an invitation to societal manipulation. These people–Tufeki and her allies— always believe that they should control what we see, hear and know, because they know better. Yet their words and conduct prove, over and over, that they don’t. As it is, the news media attempts to bury or fails to report scandals, events, facts and more because of their own biased agendas. It is in the best interest of the public that we be terrified of climate change–guns—foreign wars.  It is important that we know that whites are racist, and that illegal immigrants are heroes, not criminals. It is crucial than nothing derails health care legislation, or undermine the Presidencies of Democratic presidents. They think it is important for them to misuse their power and profession to manipulate what we think, understand and feel on a large number of crucial topics, many of them much more important than mass shootings, and if we grant them societal leave to keep us uninformed and misinformed for this one purpose, they will have no reason not to do the same for other purposes.

To withhold information from the tiny sliver of the population that will react irrationally to it, Zeynep Tufekci and others assert that information should be kept from everyone—except, perhaps, them. It is the same “logic” behind the most radical gun control proposals, but far, far more sinister, because it endorses the withholding of information—of truth—“for the common good.” Worse, it puts that power, which is the very power that the Founders sought to protect democracy from when wielded by what they thought would be its primary likely enemy, the state, in the hands of those who have proven themselves in recent decades unfit, by ideology, intelligence, education, ethical analysis powers, honesty, objectivity, and integrity, to handle such a responsibility, since they can’t even be responsible, fair and objective with the power and responsibilities they have now.

This is the ends justifies the means at it worst: hide the truth, because some madman out there will misuse it. Or some radical. Or some revolutionary. Or a candidate. Or a voter.

Zeynep Tufekc’s fatuous tunnel vision naturally causes journalists like Ezra Klein to salivate; of course he welcomes validation of the concept that people like him should be anointed with the power to spoon out only the facts he thinks will be good for us. Her “solution” to mass killings is worse, far worse, than the genuine problem it seeks to address.

I think it risks killing our freedom

9 thoughts on “Zeynep Tufekci Thinks We Should Trust Journalists To Protect Us From Mass Murderers Like Elliot Rodger, And Yet Restrain Themselves From “Protecting” Us From Other Things They Don’t Want Us To Know. And She Is A Fool.”