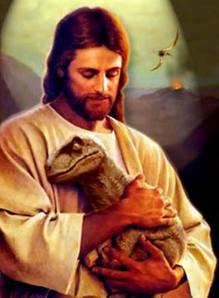 There are bad apples in every barrel, but no apple barrel should contain poison apples. When it comes to teachers, these two make me regard the entire barrel as a bad risk.

At Summerville High School in Summerville, South Carolina, a teacher caused a 16-year-old student named Alex Stone to be arrested and suspended because he wrote a passage on his Facebook page, as part of an assignment, that described using a gun to kill a dinosaur. Never mind that dinosaurs are extinct: guns are real; the teacher, a hysteric, a child abuser and a fool, notified school officials, and the school notified the police. They in turn,  searched Alex’s  book bag and locker for the dinosaur murder weapon, and came up empty. Police said that when Stone was asked by school officials about the his post, he became “very irate” —as would I—and so they handcuffed and arrested him.

Look at the bright side: at least they didn’t shoot him. Then Stone was suspended for the rest of the week.

Since the foolery and child abuse extended from the teacher to the administration, I am hoping Alex Stone’s lawyer makes them all paupers, and drives  these educational menaces to another profession, like urinal cleaning. Until that occurs, any parents who allow their children to be exposed to these incompetents are themselves guilty of neglect. Empty the school. I mean it. It’s the only way to stop this stuff.

I think it’s charming that strangers say “Bless you!” or “Gesundheit!” when someone sneezes in public. It’s one of those comfy old reflex traditions that help bind us together as a society. For the most part, everyone realizes that this social grace has little to do with God, religion, or being German, for that matter. It says “I care,” that’s all. It reaffirms that this is a mutually dependent society, and not just a bunch of narcissists and sociopaths bumping into each other.

I’m pretty sure seventeen-year-old Kendra Turner will think twice from now on before she participates in this harmless piece of social balm, though. Kendra, Dyer County High School (Tennessee) student, was sent to the principal’s office on Monday morning after saying “bless you” to another student who sneezed. Then she where she was placed in in-school-suspension for the remainder of the period. For saying “bless you.

The teacher reportedly told Kendra that “we’re not going to have godly speaking” in class. She had made that clear, she thought, earlier by writing “bless you” along with “my bad,” ”hang out,” ”dumb,” ”stupid” and “stuff” as words and phases banned in her class. Let’s see…that’s slang, slang, an insult, another insult, lazy English, and “bless you.” As they say on Sesame Street, “One of these things is not like the other.”

Assistant Principal Lynn Garner said teachers can set their own classroom rules as long as they are reasonable. Uh-huh. And banning a reflex “bless you” when someone sneezes is patently unreasonable. The teacher isn’t just hostile to religion, she is hostile to kindness. This is an example of a teacher attempting to indoctrinate students with her personal beliefs, and abusing her power and position to do so. According to Turner, after she said “bless you,” the teacher stood up and asked who had spoken, as if she had shouted “Heil Hitler!” or something similarly inflammatory. Actually, the teacher might have approved of that, being a Nazi and all.

Garner, in comments to the media, felt that the incident had been “blown out of proportion,” and said,

“…I will say this in regard for our teachers. There is not one here I don’t trust my own kids with and my kids are here and other relatives are here or have been here. I trust the teachers and beyond a shadow of a doubt all of our teachers have the students best interest at heart. They treat the kids with respect, and I think the majority of the students believe the teachers genuinely care about them.”

Except that they humiliate and punish students for saying “bless you” when a classmate sneezes.

Call me a fanatic, but I just don’t think anti-religious indoctrination, bullying and the inability to distinguish a kindness from an insult are trivial, or conduct by a teacher that an administrator should shrug off. Garner should insist that the teacher make a sincere apology, and place her on probation.

16 thoughts on “Our Untrustworthy Public Schools, Part 2: The Fool and the Indoctrinator”