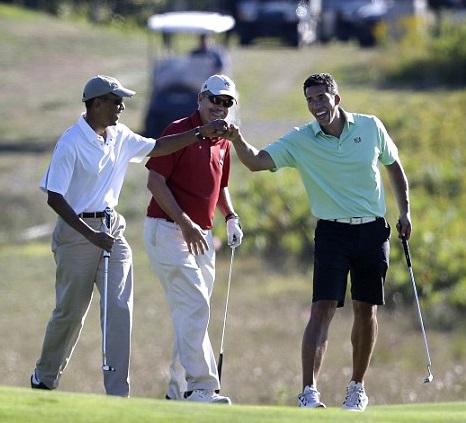 This has been a week dominated by Ethics Train Wrecks old and new: the Ferguson Express, which will presumably slow down for a few months until we find out what the grand jury does and why; the previously dormant Donald Sterling choo-choo, which came around another bend in its tracks, and, predictably, the Ethics Train Wreck that is the entire Obama Presidency, highlighted by the President more or less intentionally refusing to act like an engaged leader, happily going back to fun on the links after making a statement regarding an American journalist beheaded on video by terrorists.

Naturally the latter concerns me more than the rest, but I have realized that most of those who are in permanent denial about this leader’s ineptitude simply don’t want to process the truth in this regard. Mention the obvious, or what should be, that this frightening confluence of crises domestic and foreign is an irresponsible time to be perceived as taking a break, and one is bombarded by specious comparisons with Bush or JFK’s home away from home on Cape Cod. Some observers have the integrity to concede what many–you know, those mean Obama critics who are out to get him because he’s black–correctly discerned long ago. Here’s The New York Times, consistently one of the President’s most incorrigible apologists:

“Yet the juxtaposition of his indignant denunciation of terrorists and his outing on the greens this week underscored the unintended consequences of such a remove. If Mr. Obama hoped to show America’s enemies that they cannot hijack his schedule, he also showed many of his friends in America that he disdains the politics of appearance. He long ago stopped worrying about what critics say, according to aides, and after the outcry over Wednesday’s game, he defied the critics by golfing again on Thursday, his eighth outing in 11 days on the island.

It was all the more striking given that Prime Minister David Cameron of Britain canceled his vacation after the Islamic State in Iraq and Syria released the video showing Mr. Foley’s death because the accent of the masked killer suggested he came from Britain. Former Vice President Dick Cheney told Fox News that Mr. Obama would “rather be on the golf course than he would be dealing with the crisis.”

But the criticism went beyond the usual political opponents. Privately, many Democrats shook their heads at what they considered a judgment error.”

It is not a judgment error at all. It is just another example of Obama’s flat, flat, flat learning curve regarding leadership.

If a leader disdains the politics of appearance, then he doesn’t understand the dynamics of leadership as it has been understood and practiced for thousands of years. Appearance is leadership, much of the time; hence Ronald Reagan’s spot-on comment about how being an actor is an excellent credential for a potential President. If a leaders doesn’t look like and act like a leader, then he isn’t one, and few will continue to regard him as one. Talented leaders have engaged in the politics of appearance even at reckless personal peril: George Washington leading his ragtag troops into battle in full uniform and riding tall on a white horse; Teddy Roosevelt giving a campaign speech immediately after he had been shot in the chest by a would-be assassin. Great leaders exceed the expectations of those they lead. Failed leaders refuse to meet expectations because they don’t want to give their critics the satisfaction of being right.

It isn’t just the American public’s confidence that is shaken when their elected leader refuses to act like one; American allies are shaken as well. Meanwhile, our enemies abroad, many of which are led by individuals who understand the psychology of leadership far better than President Obama, correctly calculate that the nation is weak and vulnerable, as is any entity with an incompetent and petty leader in charge.

The previously discussed Ethics Train Wreck is frightening, frustrating and tragic. This one is just stupid. The controversy over the nickname of the Washington, D.C. NFL football franchise is entirely manufactured by the political correctness industry and it is as phony as a controversy can be. Yet it is not insignificant. It does damage to free speech and the First Amendment, its corruption has reached the U.S. Senate, the Trademark Office, and journalism,and it constitutes, I think, an important battle where the foes of censors, speech police and cynical grievance-mongers need to make a stand.

If I were the owner of the Redskins, I would wait until I won the various court battles looming ahead, and then change the name, not because the name is truly  and objectively offensive, but because a sports team’s name shouldn’t be a constant controversy. I’ve never liked the name; it pains me to defend it. It’s critics, however, are dishonest and ridiculous.

This brings us to  Ethics Dunce #1 in this update: the editors of the Washington Post. I will reprint their lead editorial this morning almost in its entirety, so its full foolishness can be appreciated:

This page has for many years urged the local football team to change its name. The term “Redskins,” we wrote in 1992, “is really pretty offensive.” The team owner then, Jack Kent Cooke, disagreed, and the owner now, Daniel M. Snyder, disagrees, too. But the matter seems clearer to us now than ever, and while we wait for the National Football League to catch up with thoughtful opinion and common decency, we have decided that, except when it is essential for clarity or effect, we will no longer use the slur ourselves. That’s the standard we apply to all offensive vocabulary, and the team name unquestionably offends not only many Native Americans but many other Americans, too…

We don’t believe that fans who are attached to the name have racist feeling or intent, any more than does Mr. Snyder. But the fact remains: The word is insulting. You would not dream of calling anyone a “redskin” to his or her face. You wouldn’t let your son or daughter use it about a person, even within the privacy of your home…

What we are discussing here is a change only for editorials. Unlike our colleagues who cover sports and other news, we on the editorial board have the luxury of writing about the world as we would like it to be. Nor do we intend to impose our policy on our readers. If you write a letter about football and want to use the team name, we aren’t going to stop you.

…[E]very time the R-word is used, something disrespectful is happening. We hope Mr. Snyder and the NFL will acknowledge that truth sooner rather than later. In the meantime, we’ll do our best not to contribute to the disrespect.

It is frightening that what is generally regarded as one of the foremost journalistic voices in the nation is edited by a group that could concoct something so embarrassing. To begin at the end for a moment, how can any new media outlet retain credibility while admitting that it ” has luxury of writing about the world as we would like it to be”? The Post has the right to say what it would like the world to be, certainly, but writing as if the world is in fact as the Post would like it to be means misrepresenting the world to its readers. The Post editors may wish its home city’s football team were not named the Redskins, but it is, and as professional journalists, they may not act as if it were not just because they don’t like it. Any idiot should be able to see what an open-ended precedent for abuse this is, which means, I guess, that the Post is run by very special idiots. Why won’t they announce at some future date that they will no longer acknowledge the presidencies of Andrew Jackson and Ulysses S. Grant, both of whom persecuted Native Americans, and about whom the descendants of their victims justly feel bitterness? Their faces are on the twenty and fifty dollar bills respectively: will the editors eschew mentioning those denominations? The numerals themselves? After all, according to this screed, they have the luxury of writing about the world as if Missouri was still a Cherokee territory, John Quincy Adams was elected to a second term and Horacio Seymour was our 18th President.

But that was just the final insult to logic and journalistic ethics. It was preceded by these:

In contrast, I give you Ethics Dunce #2, Washington Redskins Ethics Train Wreck Division, the town of Wiscasset, Maine.

Four years after the town’s high school abandoned the nickname “Redskins” for the more neutral “Wolverines,” the selectmen of the town decided to rename a road “Redskin’s Drive” to assuage the nostalgic longing of school alumni. Putting aside the fact that the placement of the apostrophe either shows that the high school is no damn good, or that the road name is intended as a slur on Native Americans, this violates the Second Niggardly Principle, which clearly states…

“When an individual or group can accomplish its legitimate objectives without engaging in speech or conduct that will offend individuals whose basis for the supposed offense is emotional, mistaken or ignorant, but is not malicious and is based on well-established impulses of human nature, it is unethical to intentionally engage in such speech or conduct.”

The decision to re-name the road is unethical.

Somehow, though, I bet that most of those elected officials making that decision would still be able to figure out that running off to play golf immediately after learning about the brutal beheading of an American by terrorists looks terrible.

6 thoughts on “Ethics Train Wreck Updates: The Obama Presidency and The Washington Redskins”